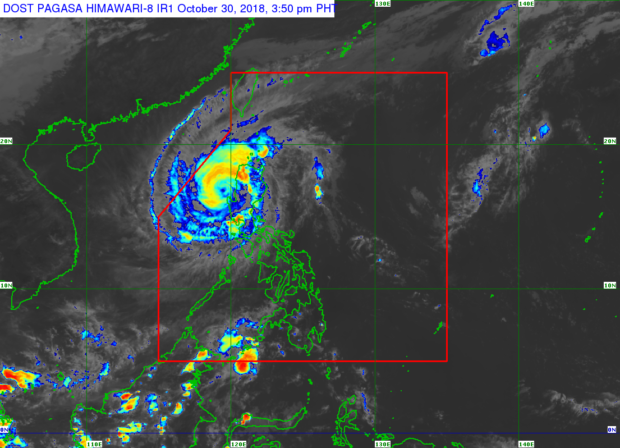 In its latest bulletin, the Philippine Atmospheric, Geophysical, and Astronomical Services Administration (Pagasa) said it last spotted Rosita in the vicinity of Sablan, Benguet as of 1 p.m.

The typhoon packs maximum sustained winds of 140 kilometers per hour (kph) and gustiness of up to 230 kph, moving west with a speed of 20 kph.

Rosita hit land in Dinapigue, Isabela around 4 a.m. Tuesday. It then went through Nueva Vizcaya, and now Benguet, according to Pagasa.

Rosita is expected to pass through La Union and Pangasinan before possibly exiting landmass around 4:00 p.m. Tuesday.

Many areas in Northern and Centra Luzon remain under Signals No. 2 and 3, and moderate to heavy rains can be expected to continue in these places, thus, land travel in these regions is still risky, Pagasa said.

Residents in these areas, especially those living near river channels, in low-lying areas, and mountainous areas, are also advised to take precautionary measures against possible flooding and landslides.

Pagasa also advised fisherfolks and those with small seacrafts not to venture sail out over the seaboards of areas under storm signal warnings, as well as the eastern and western seaboards of Southern Luzon.

Storm surges of up to 3 meters is possible over the coastal areas of Ilocos Sur, Ilocos Norte, La Union, and Pangasinan, according to Pagasa. /kga