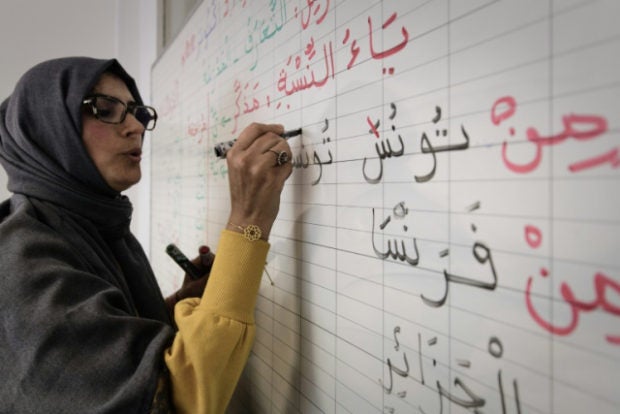 Lissane is one of a growing number of private language schools where the children and grandchildren of North African immigrants go to learn classical Arabic. Image: AFP/Philippe Lopez

In the ethnically mixed Paris suburb of Kremlin-Bicetre, a group of children sit quietly at their desks while outside their classmates frolic in the autumn sunshine.

“Ayna yaskunu Adel? (Where does Adel live?)” teacher Hanan asks the children, pointing to a textbook drawing of a boy and girl in a village with a school and a mosque.

Hands shoot up, and a little girl replies that he lives behind the “madrassa,” or school.

Welcome to Lissane, one of a growing number of private language schools where the children and grandchildren of North African immigrants go to learn classical Arabic on Wednesday afternoons, when schools are closed, and on the weekend.

While Hanan’s students, aged 7 to 10, study interrogative pronouns in one of seven classrooms housed in a former office building, a group of four-year-olds next door is singing a nursery rhyme about the parts of the body.

So far, so normal, with the notable difference that female teachers wear the Muslim headscarf, a garment banned along with other religious symbols in state schools.

But it is not so much the headscarves as the “Islamic sciences,” or religion lessons, conducted at Lissane and many other private Arabic language schools, that have drawn scrutiny in a country that has an uneasy relationship with its Muslim minority, the largest in Europe at an estimated five million.

Lissane’s co-founder Abdelghani Sebata, a 37-year-old Algerian law graduate, says that the religious component of the course — which includes learning verses of the Koran — is “very light.”

“We leave the religious side to the families,” he told AFP.

But at the many mosques that also teach children to read and write the Arabic used in official communications, literature and media across the Arab world, as well as in the Koran, Islam is the main focus.

A report on radicalization last month by the Institut Montaigne, a respected liberal French think-tank, warned that Arabic classes had become “the best way for Islamists to attract young people into their mosques and (private) schools.”

Arguing that classical Arabic should be treated like all other “great languages” such as Russian and Chinese, he vowed to develop its teaching in state schools in order to combat “the drift towards self-ghettoization” in private institutions.

His proposal drew a furious reaction from right-wingers who view the use of Arabic by North African immigrants with hostility, seeing it as evidence of a failure to integrate.

Luc Ferry, was was education minister under former center-right president Jacques Chirac, questioned whether the government was bent on “fighting Islamism or bringing it into public education” — suggesting that by giving Arabic more prominence it was doing the latter.

“We’re in a logic of submission,” fumed Louis Aliot, a lawmaker from the far-right National Rally (formerly National Front) party, echoing the title of a novel by controversial author Michel Houellebecq, “Submission”, which imagines a France ruled by Islamists.

Hakim El Karoui, author of the Institut Montaigne report which revived a long-running debate about France’s insistence that immigrants ditch their ethnic identities on arrival and embrace Frenchness, said he was “not at all” surprised by the reaction on the right.

“Everything to do with Arabs drives them a bit mad,” El Karoui, a Tunisian-born geography scholar and former government advisor, told AFP.

He points to the increasing scarcity of schools offering Arabic — France’s second-most spoken language, and one used by over 430 million people worldwide — as evidence of their reluctance to teach a subject associated with “problematic” immigrants.

Only 567 primary schoolchildren studied Arabic last year, a third of the number who took Chinese as their mandatory second language. Most chose English.

In secondary school, just 11,200 pupils studied Arabic, which is offered in a handful of schools in each city, mostly elite city-center colleges.

With demand far outstripping supply, parents have turned to mosques, religious associations and private schools like Lissane, which together attract some 80,000 students, according to a government estimate cited by the Institut Montaigne.

Ines Kridaine, a 35-year-old Tunisian living in France for the past 13 years, enrolled her daughter Ikram in classes at Lissane at the age of four.

Five years later Ikram can understand her Tunisian relatives, follow Arabic news channels and read the Koran. But Ines, who wears a headscarf and a loose abaya robe, still wishes Arabic was taught during class time.

“It should be treated like any other language,” she said.

It’s a view shared by Jerome Gercet, principal of an international secondary school in the southeastern city of Grenoble that has to turn away applicants for its Arabic section each year.

After graduation, most of his students go on to study political science, medicine, business, engineering, arts or administration.

That’s proof, he said, that Arabic is “a subject of excellence.” CC