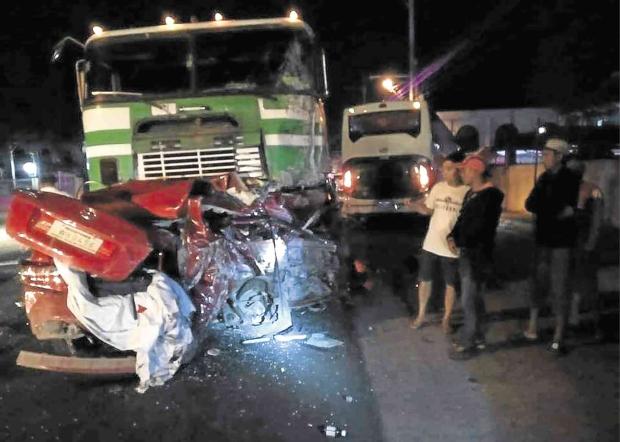 The Bautista family’s car is reduced into crumpled metal after it was hit by a truck in Batangas province. (Photo courtesy of the Calabarzon Police Regional Office)

SAN PEDRO CITY — A couple, their 4-year-old daughter and a tricycle driver died while seven others were hurt in a crash that involved a truck and three other vehicles in Sto. Tomas town, Batangas province, on Monday morning, police said.

Rencie Bautista, 33, an engineer, died instantly along with his wife, Remedios, 33, a bank assistant manager, and their child, Zyryn Athena, according to police.

The family was on its way to Metro Manila when the accident happened.

Also killed was Calexto Racasa, 64, the driver of a tricycle also involved in the crash.

“Based on the CCTV (closed-circuit television footage in the vicinity), the tricycle was trying to cross [the highway] and was partly occupying the opposite lane when it was sideswiped by the truck,” he said.

The truck rammed next into the Bautistas’ car, which was being tailed by a passenger bus of Bicol Isarog Transport System.

“The car was sandwiched by the truck and the bus,” Aggabao said.

The truck driver, Ruel Jarabese, 44, of Lucena City, was hurt.

He underwent treatment before he was taken into police custody to face a complaint for reckless imprudence resulting in homicide and damage to property.