As Boracay visitors reach more than 6,000, trash starts to pile 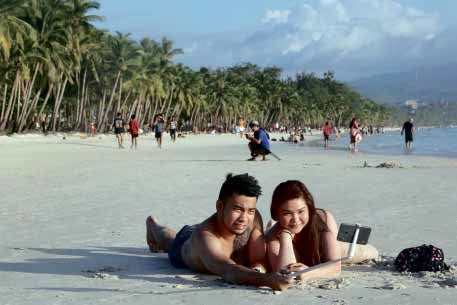 SUNNY HOLIDAY A couple takes a selfie on the powdery white sand beach in Boracay on Sunday, three days after the island’s reopening to tourism. —MARIANNE BERMUDEZ

BORACAY ISLAND — Three days after its reopening, tourists pour in large groups into Boracay, amazed at the world-famous resort island’s transformation after a six-month cleanup.

But residents and guests alike are worried about the likely return of a problem that has pestered for years: piles of trash all over the island.

On Sunday, the 4-kilometer stretch of the island’s famous White Beach was filled with visitors, mostly locals from Aklan and the adjoining provinces on the island of Panay.

From the reopening on Friday to Sunday noon, 6,434 visitors have entered Boracay, according to records at the Caticlan Jetty Port.

They have been filling the hundreds of hotels, bars and restaurants that have reopened after meeting the government’s new, strict requirements for permits to operate.

The highest recorded visitor influx came on Saturday, with 3,650 guests arriving on the island, including 3,191 who had confirmed hotel bookings.

But as Boracay’s tourism industry creeps back to life, residents, and even visitors themselves, notice trash on the island.

First-time visitors from Russia said on Sunday they were amazed at the beauty of the island, but dismayed by improper disposal of garbage.

They pointed to a pile of uncollected trash on the roadside of D’Mall Plaza at Barangay Balabag.

Such disregard for environmental cleanliness was one of the reasons President Rodrigo Duterte ordered Boracay shut down in April for cleanup and rehabilitation.

Before the shutdown, Boracay generated 71 tons of trash every day.

After the cleanup, the Department of Environment and Natural Resources is keeping an eye on waste disposal on the island, although it has yet to fully enforce a ban on single-use plastics.

The Inquirer has seen stores and restaurants that still sell food and drinks in single-use plastic plates, cups and bottles with straws.

Water in plastic bottles is widely sold on the island.

According to Environment Undersecretary Benny Antiporda, the ban on single-use plastics would be “strictly implemented” after Nov. 2.

That should ease the job of Alberto Rodriguez, 65, who oversees garbage collection on the island.

Rodriguez wakes up at 1 a.m. every day and walks half a kilometer to Balabag Plaza, one of five trash collection points in the village, to supervise disposal.

Those who forget the rule bring their trash back home.

“If I say I will not accept their garbage, they cannot do anything. I am just doing my job,” Rodriguez said.

He has a greater reason to enforce the rule now: Boracay has been shut down because of waste.

It should not happen again, although Malacañang said on Sunday it was open to shutting down Boracay for a month’s “rest” every year, as suggested by acting Interior Secretary Eduardo Año.

“The President always want [Boracay] in order. If the ones running Boracay think that it will be for the good of Boracay, then definitely [we are for it],” presidential spokesperson Salvador Panelo said. —WITH A REPORT FROM JULIE M. AURELIO