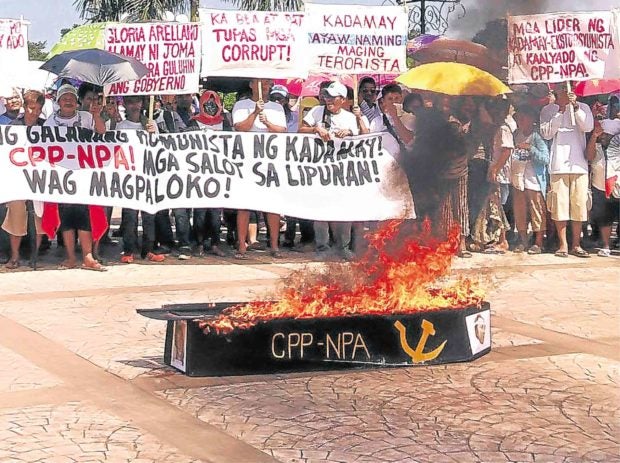 SEEING REDA group of former Kadamay members burn a mock coffin with the words “CPP-NPA” in an attempt to link the group to communist rebels. —CARMELA REYES-ESTROPE

The former Kadamay members, in a protest action called “Walk for Life,” now reside in government housing units that were forcibly taken by Kadamay in 2017.

The former Kadamay members burned a cardboard coffin bearing the words “CPP-NPA,” for Communist Party of the Philippines and its armed wing, the New People’s Army.

They belonged to a breakaway group that started negotiating with the National Housing Authority (NHA) to buy the houses that Kadamay had occupied at the two Pandi villages.

Their leader, Jeffrey Ariz, said Kadamay members were being indoctrinated on communism.

In March last year, Ariz’s group was part of the thousands of urban poor families, led by Kadamay organizers, who broke into idle NHA houses meant for policemen and soldiers.

At that time, President Rodrigo Duterte asked the beneficiaries to give up the houses to avoid a bloodbath.

But last week, the President warned Kadamay not to repeat the Bulacan takeover. He said he would order the police to evict them.

Many of those who joined the anti-Kadamay rally said they were misled into believing they could have the houses for free.

Cathylene Maluya, one of the marchers, said Kadamay wanted the houses given to them for free, which had made it more difficult for her to legally own her home.

Another marcher, Lea Yu, said she left Kadamay because the militant group required her to donate P200 every time the group staged a rally.

“We barely have money for food but they would ask us to pay for the rallies,” she said.

“We realized they were fooling us,” she added.

Tension arose during the march when a local Kadamay leader, Pat Tupaz, shouted at the marchers when they passed the village of Mapulang Lupa here.

Gloria Arellano, Kadamay chair, said the breakaway group was being misled by the military and denied the marchers’ allegations.

“We all know the police and the military have tried to break apart Kadamay in many regions by associating us with the NPA,” she said.

She said Kadamay had been negotiating for favorable terms for poor families who took the Bulacan units.

“We will pay for those units but under terms and at prices we can afford because we are poor families,” she said.

During the anti-Kadamay rally at the park, Ariz said his group had grown from 214 to more than 800 members.

“We want a simpler and peaceful life, instead of a life ruled by rallies staged by the Left,” he said. —Carmela Reyes-Estrope