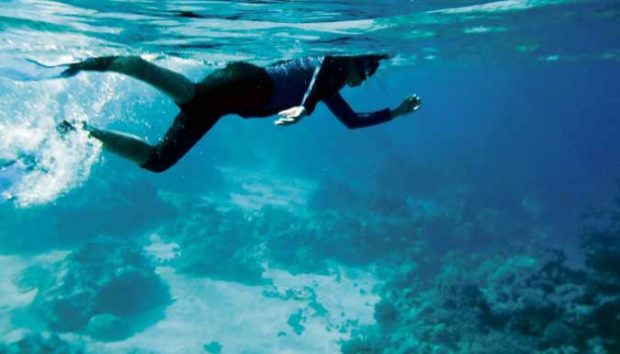 NOT BORACAY Apo Reef is a favorite diving spot, which has hosted one of the world’s richest men, Bill Gates. —CLIFFORD NUÑEZ

SABLAYAN, Occidental Mindoro — Wary of suffering the same fate that befell Boracay, the municipal government of Sablayan is restricting the entry of visitors to Apo Reef to prevent the place from turning into a “cesspool,” the word used by President Duterte to describe Boracay.

Sablayan, whose name is derived from the Visayan term “sablay,” or wave convergence, is not only the biggest town in the country in land area (218,909 hectares) but also hosts the world’s second largest coral reef next to Australia’s Great Barrier Reef.

About an hour by boat from mainland Occidental Mindoro is Apo Island (22 hectares), the biggest of three Apo Reef islands.

Juvenile blacktip and whitetip reef sharks thrive in Apo and the two other islands—Apo Menor, or Binangaan Island and the Cayos del Bajo Tinangkapang.

Another attraction is a lighthouse built in 1905, which gives a view of the West Philippine Sea.

“It is an underwater paradise,” he said, showing off a shirt with a picture of the Napoleon wrasse (Cheilinus undulates), locally known as Mameng.

Mameng, an endangered fish specie, was selected by the Department of Environment and Natural Resources this year to be Apo Reef’s mascot, Almazan said.

Mameng feeds on mollusks and the Crown-of-thorns starfish, which preys on coral polyps. Its secretions give sand on Apo beach its pink hue.
Apo Reef continues to draw tourists, mostly divers from around the globe.

In May, Microsoft founder and philanthropist Bill Gates flew in for a dive.

In 2017, Apo Reef drew 7,586 visitors and generated an income of P7.7 million for Sablayan, primarily a fishing and farming town.

“We don’t want to promote it to become like Boracay,” said Sablayan Mayor Eduardo Gadiano.

After describing Boracay as a cesspool, Mr. Duterte ordered its closure for six months for rehabilitation.

Gadiano said funds collected from entrance and environmental fees (P390 for locals, P780 for visitors and P1,000 for a guided tour) all went to a trust fund for the maintenance and protection of Apo Reef.

Gadiano said many people wanted to visit Apo Reef, but he didn’t want it to become like Boracay.

The municipal government, he said, limited the number of visitors to only 105 per day who were allowed to stay for only up to two days.

Touted as a diving mecca, the marine expanse is home to 400-500 species of corals and about 500 marine species.

The beaches serve as nesting grounds for hawksbill and green sea turtles.

“It reminds us that there were people here before us and had appreciated this beauty,” Almazan said.

“What’s unique with this natural park is that we have not done anything to alter it. Nothing added or removed,” he added.

In 1996, Apo Reef was declared a protected area and the entire region was eventually closed to fishing.

It is also a candidate for recognition as a UN Educational Scientific and Cultural Organization World Heritage site.

In the 1980s, Gadiano said illegal commercial fishing was rampant until the government went strict with maritime laws.

“Apo Reef was once a fishing ground,” Gadiano said.

He said “little by little” authorities explained to fishermen that declaring the area a “no take zone” actually meant more fish.