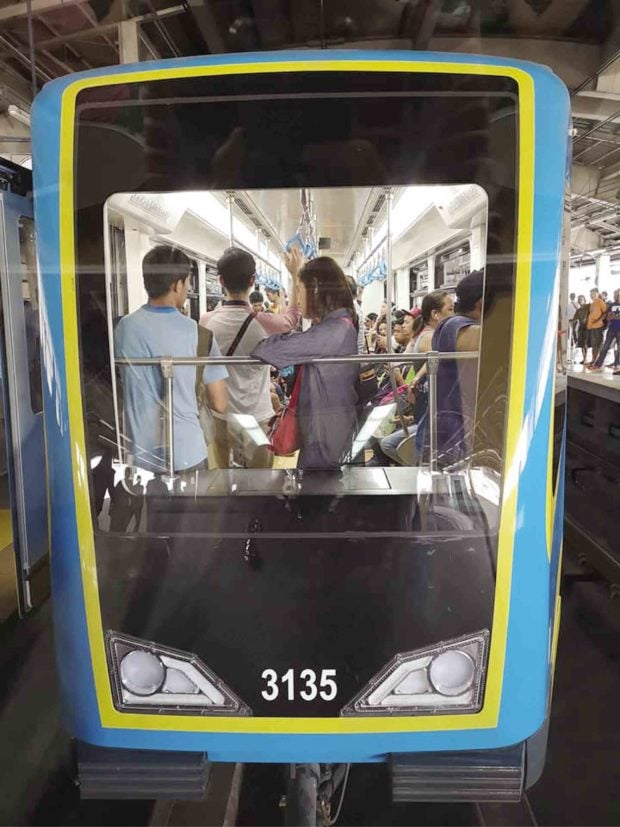 NEWEST ADDITION The MRT 3 rolls out its 19th operational train, one of the 18 brand-new trains bought by the previous administration. —contributed photo

After undergoing months of extensive tests to ensure its usability, the first Dalian train hit the tracks on Saturday morning to mark the China-made trains’ gradual addition to the Metro Rail Transit (MRT) 3 fleet.

The train was one of 18 (each consisting of three light rail vehicles or cars) purchased for P3.2 billion by the Aquino administration, which since 2015 had been gathering dust at the MRT 3 depot over compatibility issues.

These included whether the new trains made by CRRC Dalian Co. Ltd. were within the allowable weight that the tracks could carry.

Its maiden voyage came after a three-year-long endeavor by the Department of Transportation to salvage the multibillion deal as public pressure to solve the problems faced by the deteriorating MRT 3 system mounted.

Transport Undersecretary for Railways TJ Batan told reporters that the lone Dalian train was the first to complete the battery of tests required before deployment.

These included running for at least 1,000 kilometers and undergoing basic functional tests to ensure that it was safe for public use, he said.

The new train would be deployed during off-peak hours and on weekends to augment the average of 15 trains that normally operate every day.

The Dalian trains are supposed to be deployed this quarter so the MRT 3 could keep at least 15 trains operational as Sumitomo begins its 43-month-long rehabilitation and overhaul of the entire train system starting in November.

But it may take a long time before the 15 other Dalian trains hit the tracks, Batan said. For starters, only 11 light rail vehicles have completed the 1,000-km run as these can be done only between 10 p.m. and 5 a.m.

Allaying fears that the monthslong rehabilitation work would result in fewer trains, Batan said transportation officials had asked Sumitomo to keep the number of running trains at 15.

All 18 Dalian trains were subjected to an independent audit by TUV Rheinland, which found them generally usable despite several deviations from the terms of reference for their purchase.

The full report has yet to be made public, although Batan discussed several of the audit’s findings on Saturday.

The audit found that while the Dalian trains were 3.3 tons above the required 46.4 tons, it had “no impact on safe passenger operations.”

On the other hand, the train’s full weight, which measures its load at a crush capacity of eight people per square meter, were 10 tons less than the axle-load limit.

The audit also found that its signaling system was also safe for commercial use.

However, the DOTr has yet to fully resolve other compatibility issues, such as adapting a car hoist and an underfloor wheel lathe for the new trains.