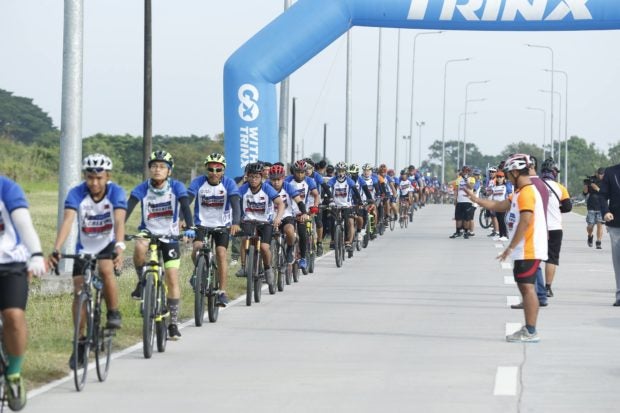 BIKING FOR A GUINNESS RECORD. Some 4,999 Filipino bikers participate in the Guinness World Record attempt for the single longest bicycle parade at Clark Freeport in Pampanga on October 28, 2018. CDC PHOTO

CLARK FREEPORT — They had the numbers, but 4,999 Filipino cyclists failed in their attempt on Sunday to get the Guinness World Record for the longest single-line bicycle parade.

A Guinness World Record adjudicator came to judge the event but ruled that Bangladesh still holds the record for having 1,186 bikers pedaling in a single, continuous line.

“Unfortunately, after two attempts, we could not keep the challenge of maintaining no gaps in the 12-kilometer distance [parade],” explained Benedict Camara, one of the organizers of “Trinx Creating History: A world record-breaking event.”

“It was like a rubber band effect. It takes time to snap back [to place and maintain the distance],” Camara added.

Organizers gathered almost 5,000 cyclists belonging to 240 groups from all over the country, including actor Gardo Versoza’s Cupcake Bikers Group.

Asked if they would make another attempt, Camara said: “We’ll have to think about it.”

It was the first time for Clark to host such a big number of bikers, and the feat establishes the Freeport as a biking destination, said Clark Development Corp. president Noel Manankil. /ee