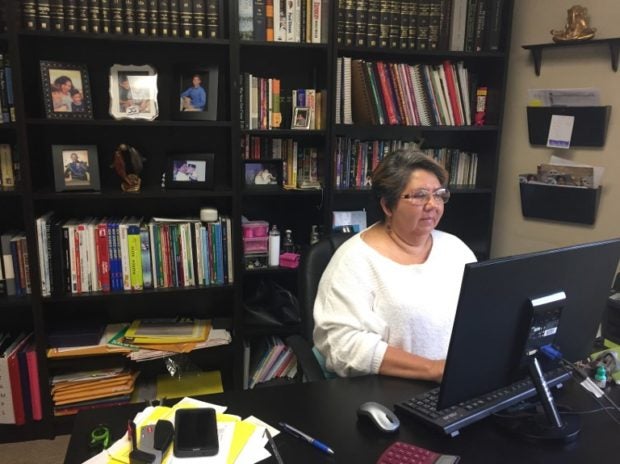 Yraida Guanipa, an activist released from prison more than 10 years ago who currently defends other ex-convicts’ human rights with her organization YGInstitute, talks to AFP in her office in Miami, Florida, on October 23, 2018. (Photo by Leila MACOR / AFP)

MIAMI — Yraida Guanipa did time for drug-related offenses and was released more than 10 years ago, but she still is not eligible to vote in the US midterm elections on November 6.

She is not alone: in Florida, there are 1.5 million people who cannot vote — more than 10 percent of its adult population — because the Sunshine State strips felons of their voting rights.

“It makes us feel like we are not citizens. Like we are another class of people, an inferior group that cannot speak,” said Guanipa, who is 56.

Technically, the restriction dates back to the post-Civil War period.

Thwarted by the US Congress, which forced states to grant full civic rights to former slaves, Florida lawmakers opted to bar felons from voting — a disproportionate number of whom were freed blacks.

At that time, “lawmakers — especially in the South — implemented a slew of criminal laws designed to target black citizens,” according to Erin Kelley, a voting rights and elections expert at the Brennan Center for Justice at the New York University School of Law.

The controversial clause in Florida’s state constitution, which today affects blacks and Latinos in particular, is on the ballot in November.

Amendment 4 would automatically restore voting rights to felons who have completed their sentences, paid restitution and fulfilled their parole or probation — except those convicted of murder or sex crimes.

Guanipa got out of prison in 2007 after serving nearly 12 years for her drug conviction.

“I started to see what this country is really all about and the things that we have to change,” said Guanipa, who was born in Venezuela and is a nationalized US citizen.

She spoke with AFP at the YG Institute in Miami, an organization she founded to help other ex-cons transition to life outside prison.

Currently, felons must wait a minimum of five years after completing their sentences to apply for restoration of their voting rights.

Defenders of the status quo like Richard Harrison, of the Florida Rights Coalition, says the new amendment fails to take into consideration the harm done to victims, the felon’s post-release conduct and other factors.

But critics say the current process — and a review by a clemency board — is slow and arbitrary.

Some ex-cons say the process can take decades.

“In my case, I could be dead before I could vote again,” said Guanipa.

Nationwide, six million people cannot vote because of their criminal records. Florida, a swing state that also plays a key role in national elections, has the largest number of those.

If Amendment 4 is passed, which polls suggest is likely, 1.5 million more Floridians will be granted the right to vote in 2020 — date of the next presidential election.

But which party would benefit the most?

“The common assumption is that a large portion of these disenfranchised felons would lean Democratic,” said Susan MacManus, a political analyst at the University of Southern Florida.

But Gregory Koger, a professor of political science at the University of Miami, told AFP the implications were less clear-cut — noting that those with a high school degree or less tend to vote Republican.

“They would have to register to vote and then actually turn out to vote. It is not clear how many would do so,” Koger told AFP.

Earlier this year, a federal judge said the clemency board’s system of restoring voting rights was unconstitutional, as its decisions were arbitrary, and ordered the board to set specific criteria.

That case is now under appeal. Guanipa is one of the plaintiffs.

“It remains the worst voting rights crisis in America,” said Jon Sherman, an attorney with the Fair Elections Legal Network, which is representing the plaintiffs.

“There is no level of disenfranchisement or voter suppression anywhere close to the level at which Florida disenfranchises people with felony convictions for years and decades of their life, even after they’ve done everything that the criminal justice system requires of them,” he said.

“And it’s completely unfair and un-American and unconstitutional.”

Today, more than one in every five African Americans in Florida (21 percent) cannot vote, according to the Sentencing Project.

Experts say no such studies have been carried out for Latinos.

But they cite a 2003 investigation carried out in 10 states by Latino legal defense group MALDEF that concluded that Hispanics are disenfranchised at a higher rate than the general population.

“The law was passed to deny blacks the right to vote. We Latinos were not here,” said Guanipa. “But when we got here, they said, ‘OK, let’s take it away from them, too.'”