Catholic Church fails to get on youth wavelength 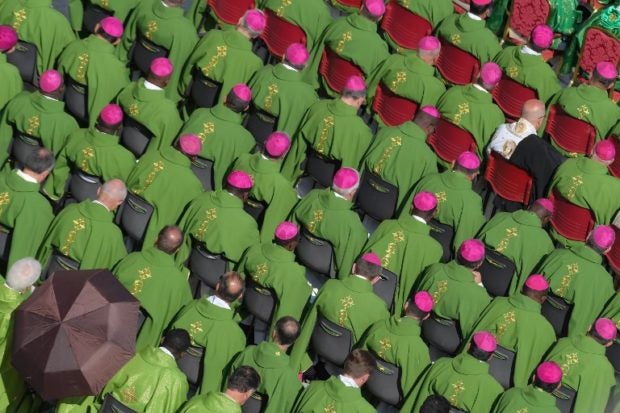 Bishops attend a Papal Mass for the opening of the Synod of Bishops focusing on Young People, the Faith and Vocational Discernment, on October 3, 2018, at St. Peter’s square in the Vatican. AFP

VATICAN CITY, Holy See – Hailed as a chance for the Catholic Church to reconnect with today’s young, a month-long meeting at the Vatican ended with a whimper Saturday as bishops from across continents fail to see eye to eye.

The 267 prelates attending the meet had been tasked with finding a way to breathe fresh life into a centuries-old institution suffering from both a damaging global sex abuse crisis and widespread secularity in the West.

Pope Francis appeared to acknowledged the difficulties of presenting an attractive front, saying the church was being “persecuted” and “dirtied” by “continuous accusations” — a possible reference to his conservative critics.

He said the concluding document from the meeting, or synod, was “for all of us, me included”, and “must work in our hearts”.

Not everyone was happy. The text “looks like an IKEA catalogue”, one exasperated bishop told AFP on condition of anonymity.

“You have everything you need for the bathroom and the kitchen, in all styles, so everyone can identify with it,” he said.

“One Eastern European bishop ventured to say that the church’s rule about ‘no sex before marriage’ had become untenable. We moved on to the next issue and didn’t talk about it again,” the bishop said.

“The conservatives later joined the fray by demanding a reminder of church morals,” he said.

Another bishop told AFP that “consensus on the digital (world) is possible, but not on sexual morality. The difference in opinions is too great”.

The sex abuse crisis, which has shaken the church from Germany to Chile and the United States, was discussed during the first week but took a back seat when clerics from countries spared the scandal so far shifted the focus to other matters.

Some complained there was no progress elsewhere either.

Women invited to participate called for a greater female role within the church, with progressive Catholic lay groups slamming the lack of voting rights for the female religious superiors present.

As well as the bishops, two non-ordained religious men were able to vote.

“In many places it is difficult to give (women) space in decision-making processes,” the synod fathers said in the document.

“The absence of the female voice and gaze impoverishes the church,” the document’s authors said, and they recommended “making everyone more aware of the urgency of an inextricable change”.

The text was vague on homosexuality, saying merely that there are “already accompanying walks in the faith of homosexual persons” in many Christian communities, and “the synod recommends encouraging these paths”.

Attempts by some of the 34 young Catholics at the synod to get the LGBT acronym into the final text were rebuffed.

“Some bold proposals, likely to make newspaper headlines, were not taken up,” admitted French bishop Emmanuel Gobillard, one of the few to have talked about sexuality.

He insisted however that the synod, bringing together the elements of a universal church in all its diversity, had been a remarkable one — just one that was “untranslatable” for the media. /cbb

Read Next
11 dead, 6 injured as ‘anti-Semitic’ gunman strikes US synagogue
EDITORS' PICK
San Mig Light celebrates its 20 years in Poblacion
No arrest yet of motorcycle taxis despite termination of pilot run
Senators think TWG’s move to axe motorcycle taxi pilot run an act of ‘revenge’
Ex-aide of Imelda Marcos is New York’s No. 2 tax cheat
‘A greener, cleaner tomorrow’: A how-to guide for Filipinos who want to help with today’s energy crisis
Motorcycle taxis ‘illegal’ starting next week — LTFRB board member
MOST READ
Palace: Crisis over ABS-CBN franchise unlikely
Motorcycle taxis ‘illegal’ starting next week — LTFRB board member
ALI bares facts on Technohub deal: P4B in lease to UP, P171, not P22, per square meter per month
Prince Harry: ‘Powerful media’ is why he’s stepping away
Don't miss out on the latest news and information.