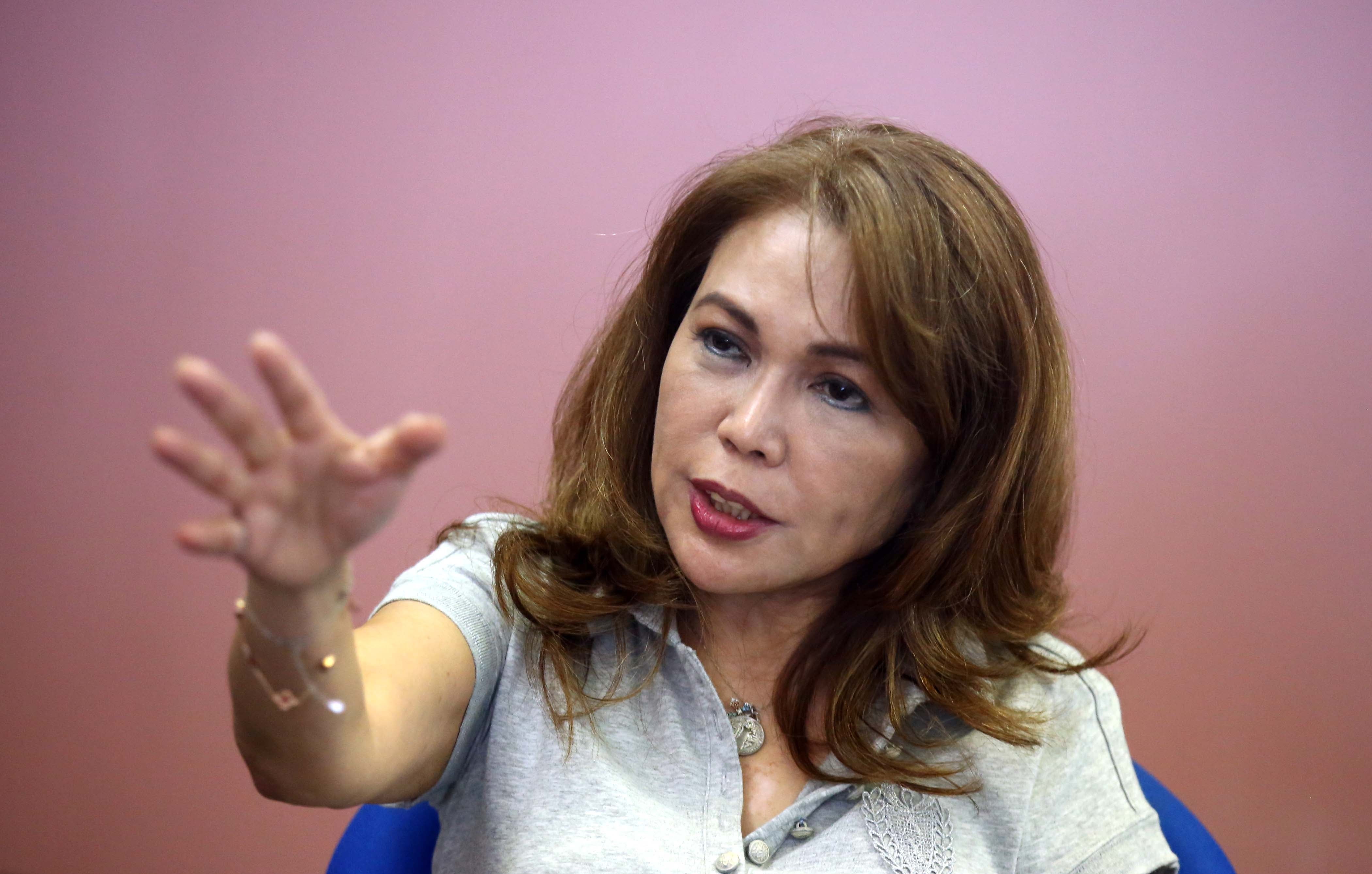 ‘TIL CONVICTION Customs Deputy Collector Ma. Lourdes Mangaoang says in an interview on Saturday at the Inquirer office that she will continue her crusade against illegal drugs and corruption until those responsible are convicted. Mangaoang, who headed the Bureau of Customs’ X-ray unit, told separate congressional inquiries that X-ray images showed that four magnetic lifters that were allowed to slip through the port of Manila contained contraband, likely “shabu” (crystal meth). —LYN RILLON

Commissioner Isidro Lapeña may have left the Bureau of Customs (BOC), but his troubles aren’t over as far as Deputy Collector Ma. Lourdes Mangaoang is concerned.

Mangaoang said she would not stop her “crusade” to uncover the truth about the alleged smuggling of an estimated P11 billion worth of “shabu” (crystal meth) and help convict those involved.

It’s this kind of battle that Mangaoang says she has fought in her nearly three decades as a career customs officer, going after syndicates and influential figures, including a former presidential adviser.

“They are insisting that my objective is to have him (Lapeña) removed [from office]. No. I will continue with this crusade in support of the President’s war on drugs and his anticorruption program. I will finish this up to conviction,” Mangaoang told the Inquirer in an interview on Saturday.

Mangaoang was a key figure in the recent congressional investigation of the four magnetic lifters that slipped through the Manila International Container Terminal (MICT) and later found in a Cavite warehouse emptied of its contents.

Mangaoang, who headed the BOC X-ray Inspection Project, said there were only two explanations the magnetic lifters were allowed to leave the MICT — either Lapeña and his men were incompetent or they were in cahoots with the drug traffickers.

Arsenio Evangelista head of the Volunteers Against Crime and Corruption (VACC), has backed Mangaoang and urged the President to put Lapeña on a “floating status” pending investigation.

“Why is the government only catching and killing the small-fry drug dealers? Where are the big fish? … Where is the whiff of corruption that you promised to detect and eliminate, Mr. President,” Evangelista asked.

Meanwhie, the Presidential Anti-Corruption Commission said Lapeña wasn’t cleared of liability in the smuggling just because he was appointed head of the Technical Education and Skills Development Authority, a Cabinet post.

In what turned out to be his last media briefing as customs chief, Lapeña on Tuesday said there was a “well-funded and coordinated attack” to boot him out of office because the reforms he had initiated in the bureau were starting to hurt not only errant traders but also drug syndicates.

“My detractors, led by a disgruntled employee who herself has been the subject of investigations of corruption in the past, publicized and exaggerated issues which were already revealed in the various congressional inquiries,” Lapeña said, referring to Mangaoang, who he alleged was “wittingly or unwittingly” helping drug syndicates in a “demolition” campaign against him.

Mangaoang dismissed his claim, saying she was not even seeking vendetta. She said she just wanted to “tell the truth” and “serve the people”—the activist mantra she imbibed at the University of the Philippines where she obtained her law degree.

Born to a public school teacher and a police general, Mangaoang, who is the second in a brood of seven, was thrust into the BOC by fate, so to speak. After passing the bar, she was asked to join the bureau in 1987 by then customs chief Alexander Padilla, a fellow activist who fought the Marcos dictatorship.

She said Padilla recruited former activists like her to join the BOC because he believed that together they could “reform the bureau.” Padilla, however, resigned  after just six months.

Mangaoang also moved out of customs to serve as a technical assistant for legal affairs of then Bureau of Immigration chief Miriam Defensor-Santiago. She returned to the BOC in 1991 under then Customs Commissioner Salvador Mison.

She has remained at the bureau since and rose from the ranks, serving in various posts in Zamboanga City, Cagayan de Oro City, Cebu City, Iloilo City and Legazpi City. She headed the BOC X-ray unit for five years until January 2013. Throughout her stint, she said she helped seize P17 billion worth of contraband, including illegal drugs such as cocaine, heroin and shabu.

What threw her into the spotlight for the first time was the smuggling charges she filed against former President Joseph Estrada’s adviser on Mindanao affairs, Lee Peng Wee, in 2000.

Lee was accused of illegally importing chemicals, believed to be shabu precursors. In 2010, the Zamboanga Regional Trial Court found Lee and two others guilty of smuggling and violating the Toxic Substance and Hazardous and Nuclear Wastes Control Act.

Mangaoang said such accomplishment showed that not everyone in the bureau was corrupt.

Still, Mangaoang herself says she is not a saint. For one thing, she admitted receiving “perks” from traders and brokers.

“It took me 10 years before I accepted ‘perks.’ There are so many perks in [BOC],” Mangaoang said, referring to such offers as dinners and gift certificates.

Mangaoang, who has been subjected to several lifestyle checks prior to the one ordered by Lapeña, stressed that these perks were “not considerations for my action.”

“I stood my ground for so many years. I am not a saint but compared to others, I am much better. I do not extort, I have done nothing illegal since I’ve been with the bureau,” she said.

One way she avoided being offered a bribe—and still allowed the flow of trade—was to not let any document for her signature stay longer than an hour on her desk.

“The longer [before] a document is signed, the more chances that the broker or importer would offer something,” she said.

Of all government agencies, the BOC is among those considered to be systemically corrupt. It is one of the government agencies with the quickest turnover of heads—20 commissioners over the last 31 years. It was only Guillermo Parayno Jr. who stayed the longest—the entire six years of the Ramos administration.

Mangaoang acknowledged that instead of being stemmed, corruption in the bureau throughout the years “worsened” not because of “old-timers” like her, but rather due to individuals who come in promising to reform the bureau, only to be eaten up by the system.

“The newcomers, in my experience, are 10 times more corrupt. I am not exonerating the old-timers, but the newcomers, they are in a rush. They want to go big immediately,” she said.

Mangaoang, nevertheless, was hopeful that the “ebb” in the bureau’s image would be overcome under incoming Commissioner Rey Leonardo Guerrero’s administration.

For Guerrero to succeed, however, Mangaoang cautioned against packing the bureau with staff with military background like Lapeña did.

Her unsolicited advice to her new boss? He should get competent people who have political will, know customs laws and procedures and could strike a balance between enforcement and trade facilitation.

‘No promises’ that Taguig’s budget will remain untouched, says Velasco