Treehouse of the spirits, home with unseen ‘guests’ | Inquirer News

Treehouse of the spirits, home with unseen ‘guests’ 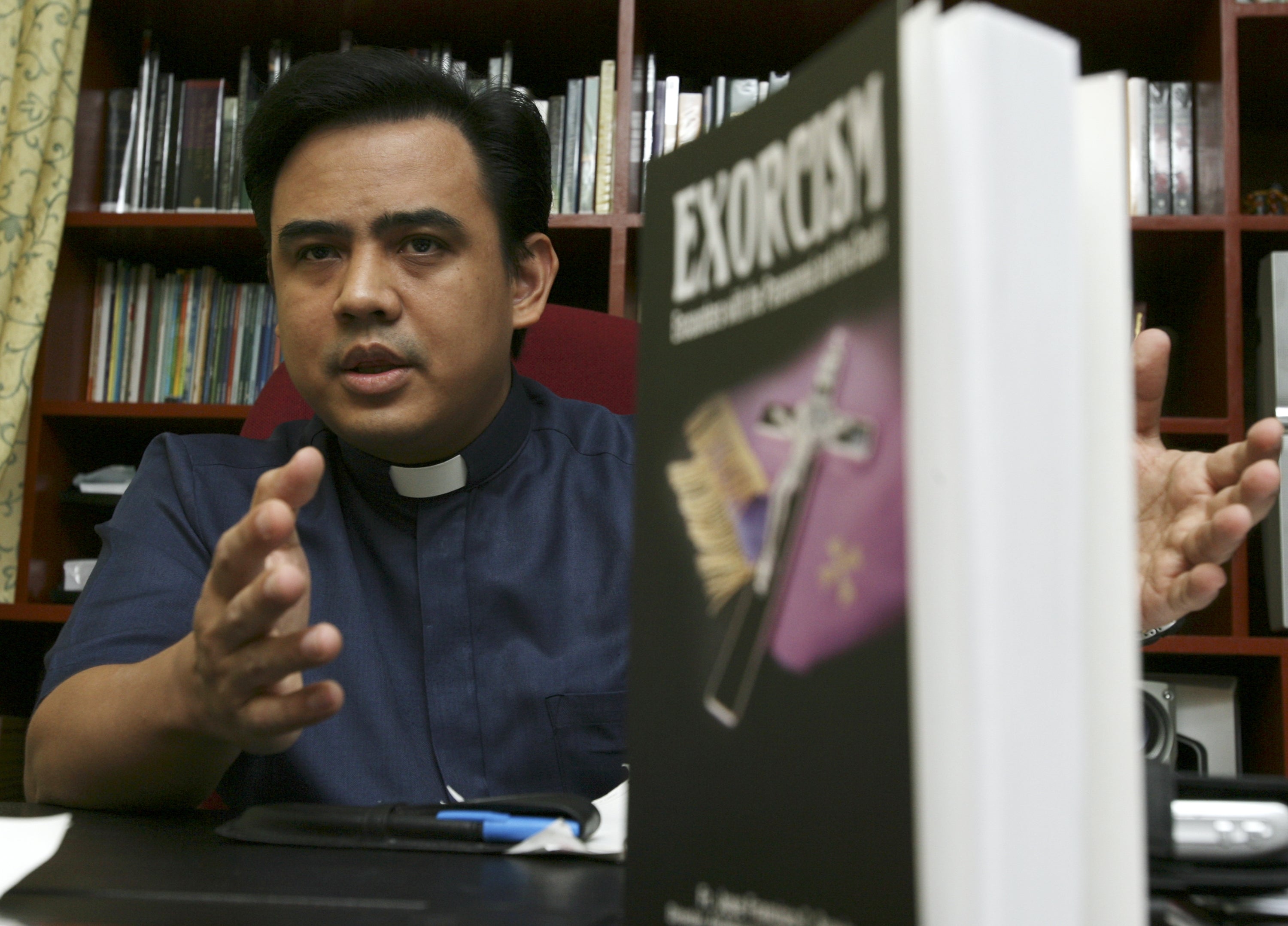 THE EXORCIST Fr. Jose Francisco Syquia, expounding on his book in a 2006 file photo, advises against seeking help from occult practitioners when dealing with unwelcome entities. – EDWIN BACASMAS

For eight years, my family stayed in this house at BF Homes Parañaque on a property we had bought from an in-law. We had built a new structure after tearing down the old one where, it turned out, some unseen tenants continued to stay.

In time, my children’s two yayas complained of strange noises, like small pebbles being thrown inside the house through the second floor window.

They would scour the floor to check but always found nothing.  It was also difficult to throw anything through the window because a tall yucca tree stood between the house and the street.

One morning, the girls showed me hard lumps that seemed to have grown overnight under the skin on their calves. No one at the barangay health center, not even a private doctor we consulted later, could explain what the lumps were.

I mentioned the incident in a casual conversation with Fr. Jude Rebaldo, then a guest priest at Resurrection of Our Lord Parish where we belonged.

Knowing he was very open-minded about what I already suspected was a case of spiritual disturbance, I invited him to see the girls.

He also inspected the house, asked the nannies some questions, and prayed over them.  The lumps were gone in a few days.

Rebaldo said an unseen entity lived in the yucca tree, an elemental or a fallen angel who lives in trees, shrubs, rocks and other nature places. It was watching the goings-on in our household from the second floor window.

He advised me to burn an old vinyl record beneath the tree “because the entity won’t be able to stand the smell and leave.”

I scoffed silently as I waved a lighted James Taylor single in the air, which I later left under the tree. The elemental didn’t take it kindly.

En route to a family vacation days later, I developed a fever inside the plane and was detained by Hong Kong immigration where I was asked when I last ate chicken. It was bird flu season at the time.

I had stomach cramps when we reached the hotel in Tsim Sha Tsui and had to beg off when everyone else went to lunch.

I barely made it to the bathroom five minutes later as dizziness gripped me. I threw up everything I ate on the plane. After several trips to the bathroom, I noticed a strange woman staring back from the mirror, with her mouth closed. Strange, since mine was slightly open as I was breathing through it.

Then the woman’s mouth twisted into a very unnatural smile.  Despite feeling a general weakness, I ran back to the bedroom, jumped into bed and passed out.

Fr. Jose Francisco “Jocis” Syquia, director of the Archdiocese of Manila’s office of exorcism, has written several books detailing personal accounts of exorcism of persons and homes as part of his ministry.

In his book “Exorcism: Encounters with the Paranormal and the Occult,” the Catholic Church acknowledges spiritual cases of haunting in places where people had died, or where someone was killed or committed suicide.

Syquia said God allows souls to “manifest themselves to living persons so they could gain the needed prayers, sacrifices and indulgences to enter Heaven.”

Once the necessary prayers are offered, the manifestations would stop.

Affected residents should call a priest instead of occult practitioners like “espiritista” to get rid of unwanted guests, Syquia said. Dealing with these persons to reach out to dead relatives is an invitation to evil spirits, he added.

Then there are the preternatural demonic causes.

“Infestation” happens when evil spirits “find a spiritual opening and are attracted to dwell and roam within the premises due to occult and sinful activities like séances or sessions with the ouija board or tarot cards, spell casting, etc., or when these places have been used for satanic worship, prostitution, crime, drug dealing or blasphemous activities such as Masonic meetings and so on.”

“Unless these activities are stopped, repeated sin and dealings with the occult can allow these spirits to have even more dominion within the home, as well as attract even more evil spirits,” Syquia said.

The presence of elementals also causes disturbances. In cases when elementals like “lamang-lupa, engkanto or nature spirits” are “displaced by the construction of the house,” they start residing in nearby structures, “such as an old tree standing near the house.”

Syquia said human residents of an infested area should not compromise with these dwellers that the Church describes “are of a diabolical nature.”

“There is no such thing as mutual peaceful coexistence with elementals or nature spirits … They will always clandestinely affect the persons in the home in a negative manner through sicknesses, relational problems and divisions within the family, emotional and psychological illnesses like impatience, anger and depression, temptations like lust, pride and sloth in one’s prayer life, a weakening faith, and even failures in  businesses,” the priest explained.

Some wily spirits, in an effort to gain a family’s trust, would sometimes offer “protection” or “good luck” initially to be allowed to stay. They may also appear as beautiful beings like the “spirit guides” that New Agers favor. This only allows them to eventually affect family members “in more dangerous and unseen ways,” Syquia said.

We were about to move to another address when I finally learned the backstory of our house.

The former owner once had a tenant who thought of getting help from a “duwende” (dwarf), one of the better-known elementals, thinking it would bring luck to his business.

He built a tiny house somewhere in the garden for any random duwende to live in.  Business thrived while the tenant stayed in the property.

But when he moved out, his children, grandchildren and their guests started experiencing eerie stuff in their new home just a street away.

The eldest child would see a man with luminous green skin. A classmate complained to a granddaughter about a “quiet auntie with long hair” who won’t respond when greeted.

The youngest child talked of “small people” who poked her from under her pillow as she slept at night.

Some of the elementals continued to live nearby. One night around 3 a.m., I was awakened by noise and saw the lighted bulb in my night lamp’s socket turning by itself.

There was an explosion and I saw the bulb, its tungsten filament still glowing. It flew in the air and landed on the other side of the master bedroom without breaking.

It was dark but I could still make out my sleeping baby’s silhouette.  I turned to her, thanked God the noise did not wake her, prayed and covered her with my free arm.   But I couldn’t sleep.

There is no difference between the so-called white or benevolent duwende and the black, malevolent one.  They  always demand payback such as one’s soul, Syquia warned.

Asking help from occult practitioners like “espiritista” and “albularyo” could do more harm, as they derive their “powers” from evil spirits, he added.

Hence,  one may encounter “healers” who sometimes recommend other healers with “greater” powers than theirs.  That’s because these healers get their powers from fallen angels whose powers can be overturned by a stronger evil spirit.

“Relief is only short-term, followed by greater troubles since the person acquires a bond with evil spirits through the occult practitioner,” the priest said.

Syquia said he had no issue with asking help from psychics as long as they use their preternatural gifts “only according to God’s designs” and do not charge fees, not even donations, for their services.

But psychics who cleanse haunted houses should not resort to occult instruments and New Age formulas like crystals, pendulums, tarot cards, “anting-anting” and “tawas,”  he said, adding that these objects would only empower the evil spirits, and allow a bondage to be formed between psychics and those who use their services,” Syquia explained.

Admittedly, cleansing rituals by the Catholic Church may be tedious as they involve interviews about the circumstances of the disturbances, as well as data gathering about the history of the haunted house before its  actual exorcism.

The Mass and the message

It’s one thing to experience harassment by a malevolent spirit, but having children in the same environment raises the stakes. I immediately asked for prayers from several priest-friends after the flying bulb episode.

The incident played constantly in my mind so I asked God for a sign that He would protect me.

One Monday afternoon, I went with the two older children to their ice-skating lessons inside a mall. After leaving the kids with their coaches, I walked around mindlessly until I found myself staring at a church under construction just across the parking lot.

A Mass was being celebrated when I went in. I asked God’s protection, especially for the children, and a sign that everything would be alright.

Walking back to the skating rink, I passed by a taxi queue. One pulled over.  On its door was painted “San Gabriel”— God’s messenger. Also the guardian angel for Monday.

Another taxi followed, its door reading “Ina ng Awa,” referring to the Blessed Mother, Queen of the Angels, and the saint that demons are most afraid of.

Then a third taxi passed, also vacant, with the words “Santo Cristo.”

I asked for a sign and got three. The disturbances stopped after that.

(Note: An unabridged version of this story appears in nolisoli.ph published by Hinge Inquirer Publications.)