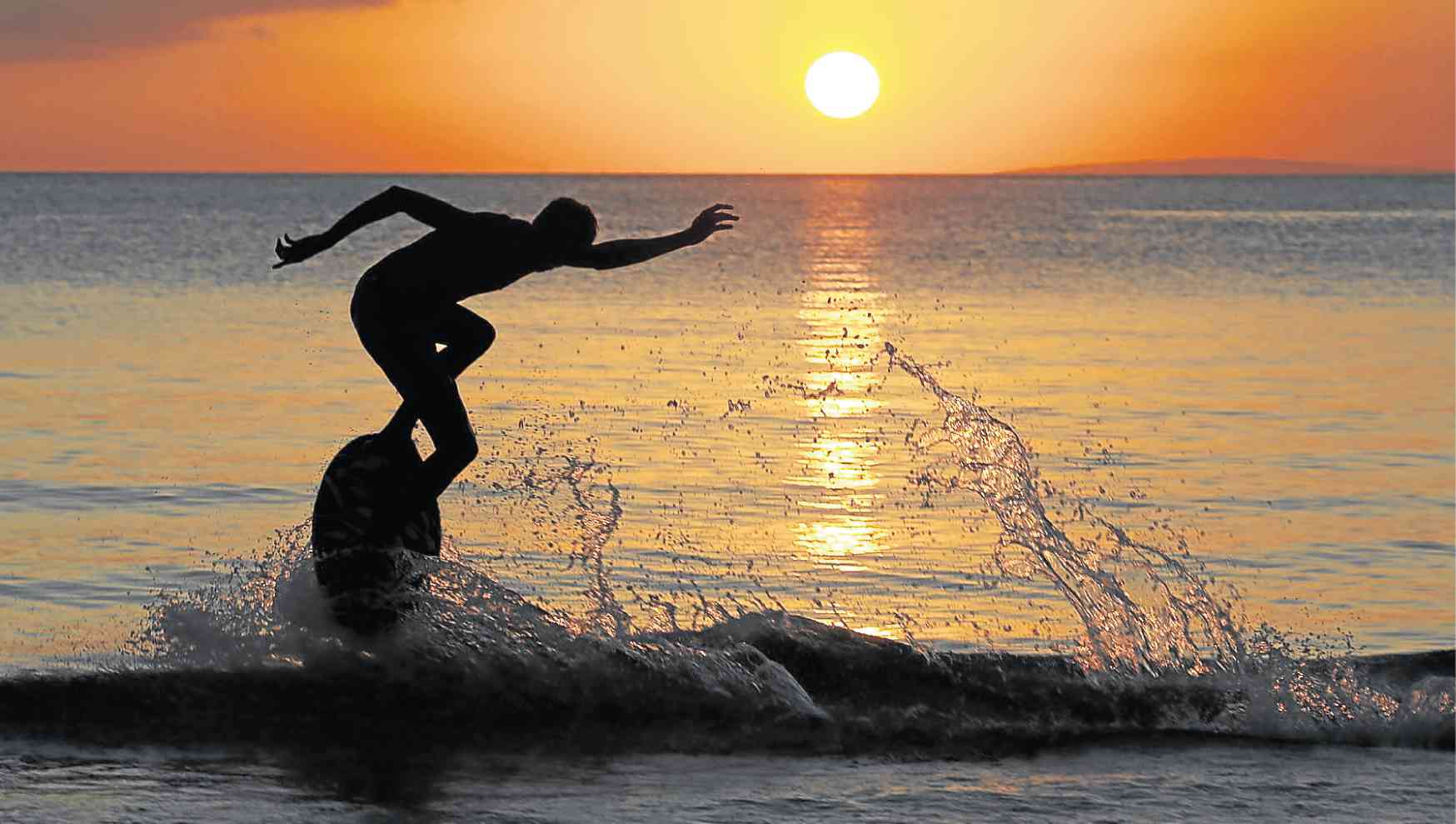 RETURN TO PARADISE A young man rides his skimboard on White Beach in Boracay on Thursday, the eve of the resort island’s reopening to holidaymakers after a six-month cleanup. -MARIANNE BERMUDEZ

BORACAY ISLAND — Boracay reopens its doors to holidaymakers on Friday, after a six-month cleanup and transformation that officials describe as radical, although the makeover is far from over.

Anticipation ran high among residents on Thursday, as the resort island prepared for the return of tourists.

Workers in many closed hotels, restaurants and shops at Barangay Balabag, the central commercial district of the island, rushed finishing touches to the improvements or did last-minute cleaning.

Residents bustled about as the first group of tourists to be allowed into the island hit the streets for a look at the new Boracay.

Fewer hotels, restaurants and shops will be doing business on the world-famous resort island this time, after the government shut down establishments that could not meet its new, strict requirements.

Fewer tourists will be allowed entry, with a cap on visitor traffic set at 6,405 people a day to prevent overcrowding and environmental pollution.

To achieve that limit, the government has asked airlines and ferries to cut back their services to the island.

As of Thursday afternoon, 470 hotels with a combined capacity of 7,985 rooms were ready for guests, according to Environment Secretary Roy Cimatu, head of the government group overseeing the rehabilitation of the island.

This time, too, holidays on the island will be less wild, with rules adopted prohibiting boozing and smoking on the beach and the huge multiday beach parties dubbed “LaBoracay” that drew tens of thousands of tourists in the past.

Fire dancers, masseuses, vendors, stray dogs, bonfires and even the builders of its famous photo-op sandcastles have been banned from the beachfront, while buildings were torn down to create a 30-meter easement from the waterline.

All water sports are banned temporarily, while the three casinos on the island have been permanently closed.

President Duterte has rejected proposals for new casinos on the island.

The Department of Justice (DOJ) issued a legal opinion on Oct. 8 saying Duterte can impose a “no casino policy” without needing congressional action.

According to the DOJ, the President may order state-owned Philippine Amusement and Gaming Corp. (Pagcor) through an executive order to cancel existing casino licenses for Boracay and refuse to grant new ones.

“The state possesses police power to prohibit gambling in the Philippines or any part of it and this power was validly delegated by law to Pagcor, a government corporation, which is subject to control by the President,” the DOJ said.

Although the infrastructure work was incomplete, Cimatu expressed satisfaction with the accomplishments of the cleanup.

“[On Friday], I will immediately report to President Duterte how much we have accomplished in six months,” Cimatu said.

Street widening was still going on along the island’s main road, from Cagban Port to Balabag Plaza, covering 4.2 kilometers.

The expansion to 6.10 meters, with pedestrian lanes and sidewalks, and introduction of drainage and sewage systems by the Department of Public Works and Highways required the dismantling of hundreds of structures that encroached on the road.

Scores of structures that encroached on the beach were torn down, but a number of others on a stretch of beach at Station No. 1 remained to be dismantled.

For vendors who used to roam the beach, a common space will be designated for them to sell their wares, Cimatu said.

“We also need to respect the privacy of tourists,” he said.

Visitors will be greeted with new, more stringent entry procedures.

Tourists landing on Caticlan Airport at Malay town on mainland Aklan will take a five-minute ride to Caticlan Jetty Port and Terminal for the boat ride to Boracay.

At Caticlan Port, travelers will be classified—and lined separately—as tourists or residents.

Residents need to show their identification cards issued by the local government, while tourists will be questioned about their hotel reservations.

The Philippine National Police will deploy officers to Boracay to ensure security as the resort island reopens for business on Friday.

PNP Director General Oscar Albayalde led the turnover on Thursday of four patrol vehicles to the police station on the island and supervised security drills as part of the preparations for the reopening.

Chief Supt. John Bulalacao, Western Visayas police director, said his command was ready for the return of tourists to Boracay. —WITH REPORTS FROM DONA Z. PAZZIBUGAN, JEANNETTE I. ANDRADE AND AFP