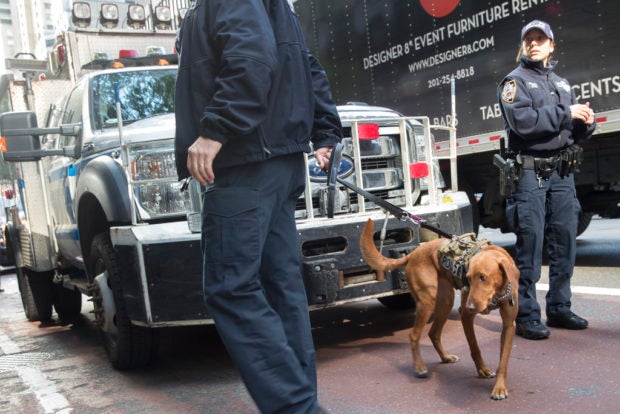 Emergency service personnel with a bomb sniffing dog work outside the building that houses New York Governor Andrew Cuomo’s office after a report of a suspicious package on Oct. 24, 2018, in New York.  AP

WASHINGTON —  A law enforcement official says a second package addressed to former Vice President Joe Biden has been intercepted at a mail facility in Wilmington, Delaware.

The official says it has similar markings and characteristics as the packages containing bombs sent to other prominent Democrats.

The official said another package addressed to Biden was also found Thursday morning, that one at a postal center in New Castle, Delaware.

The official wasn’t authorized to discuss an ongoing investigation publicly and spoke to The Associated Press on the condition of anonymity.

Several packages containing pipe bombs packed with shards of glass have been intercepted in the last few days. They targeted Hillary Clinton, former President Barack Obama, CNN and others.