Royals Harry and Meghan arrive in Tonga on Pacific tour 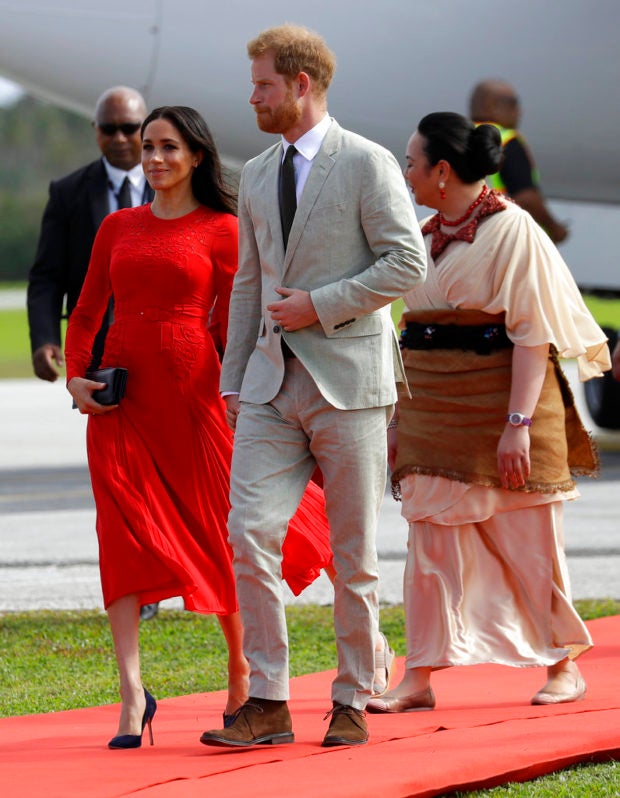 Britain’s Prince Harry and Meghan, Duchess of Sussex, are welcomed by Tonga’s Princess Angelika Latufuipeka, right, in Nuku’alofa,Tonga, Thursday, Oct. 25, 2018. Prince Harry and his wife Meghan are on day 10 of their 16-day tour of Australia and the South Pacific. (AP Photo/Kirsty Wigglesworth)

NUKU’ALOFA, Tonga — The Duke and Duchess of Sussex arrived Thursday in the tiny Pacific kingdom of Tonga, where people gathered at the airport to welcome them wearing traditional outfits, playing guitars, and singing.

Prince Harry and wife Meghan were greeted by Princess Angelika Latufuipeka. They were later scheduled to meet with Tonga’s king and queen and to attend a reception and dinner featuring traditional Tongan entertainment. Meghan stepped off the plane wearing a red dress while Harry wore a light beige suit.

The couple is on the 10th day of a 16-day tour of the South Pacific. They arrived in Tonga from Fiji, where on Thursday morning they unveiled a statue to honor Sgt. Talaiasi Labalaba, a British-Fijian war hero who died at age 30 while fighting insurgents during the 1972 Battle of Mirbat in Oman.

Labalaba helped save other soldiers by single-handedly firing a 25-pound gun that usually took several soldiers to operate, according to the BBC. He continued for more than two hours, even after his jaw was shot off, before he was eventually shot and killed. A member of the elite SAS group, his heroics were not widely known until recently because the British weren’t officially involved in the conflict.

On Wednesday, Meghan, who is four months pregnant, was rushed through an indoor market in Fiji where crowds arrived to greet her and gave a speech about attending university.

Harry and Meghan have a relatively light schedule in Tonga before they return to Sydney on Friday night for the final days of the Invictus Games, which Harry founded in 2014. The games give sick and injured military personnel and veterans the opportunity to compete in sports such as wheelchair basketball.

Tonga, home to just 106,000 people, is also known as the friendly islands. It was a British protectorate before gaining independence in 1970 and remains a part of the Commonwealth group of nations.

After Australia, the couple will finish their trip with a four-day visit to New Zealand. /kga