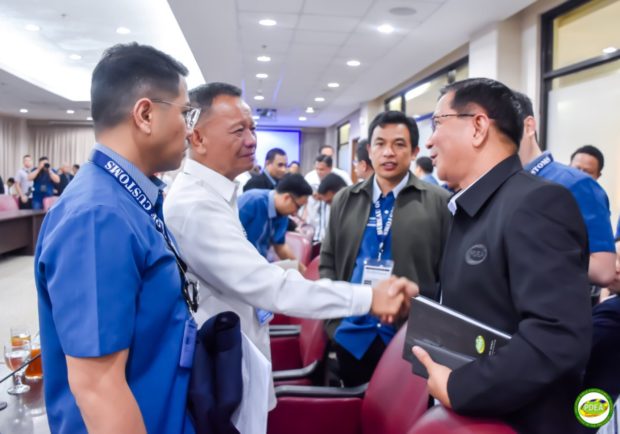 Philippine Drug Enforcement Agency (PDEA) Director General Aaron Aquino refused to comment on calls for Bureau of Customs (BOC) Commissioner Isidro Lapeña to resign over the P11 billion worth of “shabu” that allegedly slipped past the bureau last July.

Earlier, Aquino said that the four magnetic lifters seized by authorities in GMA, Cavite in August contained a ton of shabu valued at P6.8 billion. However, on Thursday, the PDEA chief changed his estimate to P11 billion, claiming the weight of the missing illegal drug could be 1.6 tons.

“I don’t want to comment on that. It’s up to the President. It’s also up to Lapeña if he wants to resign or not,” Aquino told reporters on Thursday.

Aquino said instead of calling for Lapeña’s resignation, he would rather resolve the controversy since the BOC apparently failed to intercept the multi-billion pesos worth of shabu, which could now be flooding the streets of the country.

Aquino was then asked what he would do if he was in the shoes of Lapeña. He only responded with a smile.

He said he felt “vindicated” and was “very happy” with Lapeña’s change of mind.

In a hearing at the House of Representatives on Wednesday, Lapeña said he is now inclined to believe that the magnetic lifters did contain illegal drugs after listening to the testimony of officials of the Department of Public Works and Highways, who said that the design and nature of the four magnetic lifters are not fit for lifting any scrap materials.

Also earlier, Aquino clarified that he does not intend to discredit any agency in proving that more than a ton of shabu were packed in those magnetic lifters.

Meanwhile, Lapeña, maintained he will not resign despite the controversy, saying he still has a “marching order” to implement reforms in the BOC. /kga