Boracay to reopen with fewer hotels, restos, no beach parties 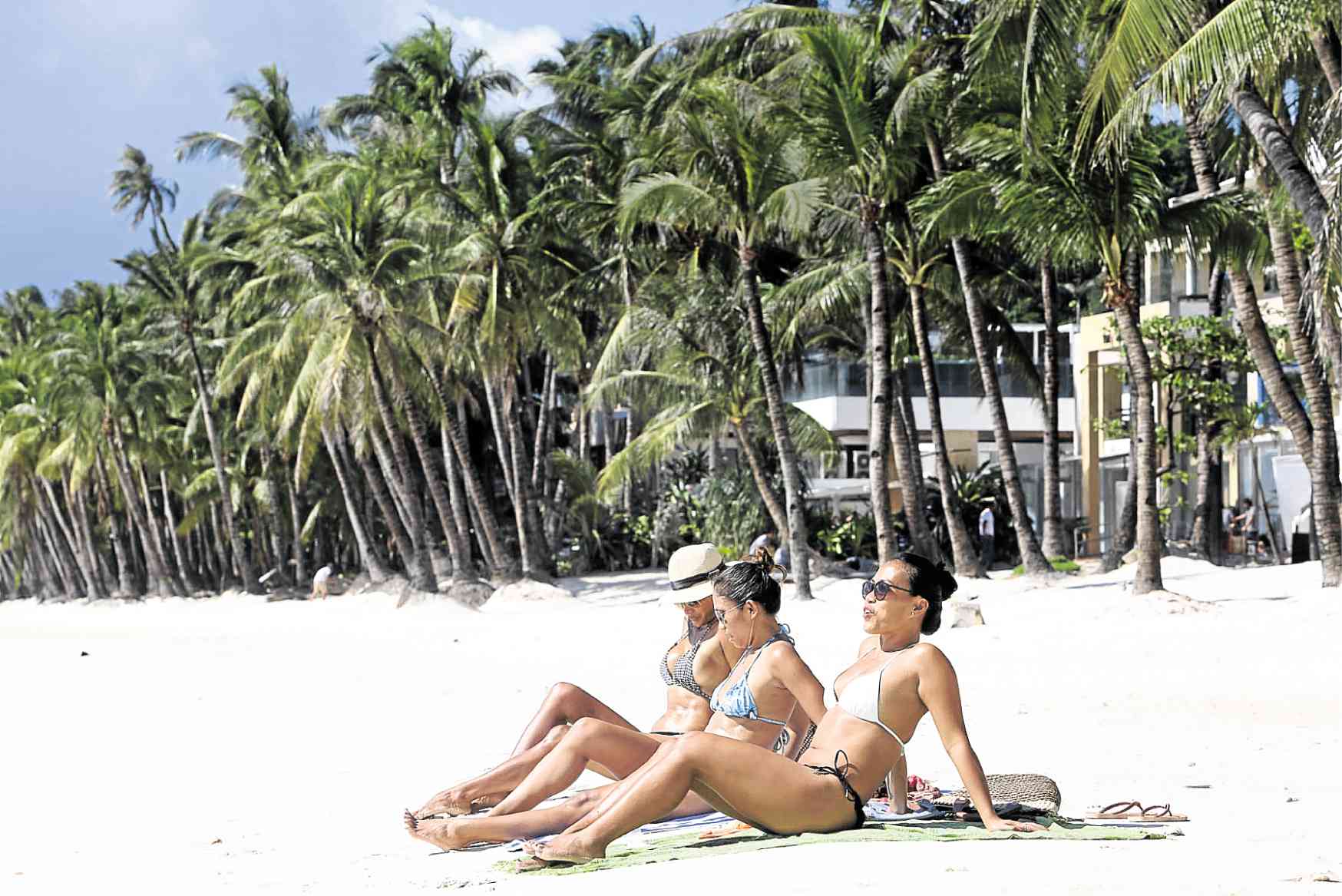 PARADISE REGAINED These beach lovers take in the refreshing view of a newly rehabilitated Boracay ahead of its soft opening on Friday, when hordes of tourists are expected to descend on the famed resort island. —MARIANNE BERMUDEZ

BORACAY ISLAND — The government reopens Boracay to holidaymakers on Friday, after a six-month cleanup aimed at repairing the damage inflicted on the resort island by decades of uncontrolled mass tourism.

President Rodrigo Duterte ordered Boracay closed in April to fortify weak infrastructure and crack down on the rampant overdevelopment that had turned the island into what he termed a “cesspool.”

When the government throws open the doors on Friday, Boracay will have fewer hotels and restaurants, a cap on the number of visitors and rules against beach boozing aimed at taming its party-hard reputation.

All of this is intended to protect the bruised beauty of the island’s turquoise waters and expanses of white sand beaches, which were being loved to death by 2 million tourists per year.

Tourism Secretary Bernadette Romulo-Puyat said she hoped the new Boracay would be the start of a “culture of sustainable tourism” in the Philippines, adding that other tourist destinations in the country would be next.

“It means taking account of the repercussions of our actions on current and future situations of the environment,” Puyat told reporters on Friday.

She said she had sent a written “warning” to other tourist destinations, including El Nido and Panglao islands, while others, such as the whale shark site of Oslob in Cebu province, had cut their tourist traffic by half.

In Boracay, all water sports save for swimming are banned for the time being, while the island’s three casinos have been permanently shut down in line with the President’s order.

Nearly 400 hotels and restaurants deemed to violate local environmental laws have been ordered closed and airlines as well as ferries have been told to cut back service to the island.

Among the businesses that will not reopen when Boracay welcomes visitors again on Friday is the inn where Emerlita Alunsagay used to work.

Alunsagay tried to make both ends meet during the island’s closure through the government’s cash-for-work program.

The program was open to only one member of a qualified family, paying P323.50 a day — the minimum wage in Western Visayas — for cleaning the beaches.

It ran for only one month. The Alunsagays struggled to survive for five.

“There were days when we barely had rice and soy sauce for a meal. What hurts most is my husband and I did not know how to explain the situation to our children,” she said.

The struggle is not over with the reopening of Boracay, as Alunsagay is among the thousands who are not regaining their jobs because the businesses where they used to be employed have failed to meet the government’s new, strict requirements for permits to operate.

Some who still earn will soon lose their livelihoods as these are located on wetlands that the government is clearing as part of the island’s rehabilitation.

At Wetland No. 4 in Barangay Balabag, Cecille Ebreo and other residents watched as a backhoe began to smash a three-story building standing next to her grocery store.

Ebreo’s store, which still contained merchandise, would be next and there was nothing she could do about it.

The store stood in a row of what the government had declared “illegal structures” in the area that was up for development as an ecotourism park by Aboitiz Foundation.

“Let them demolish it. There’s no stopping them anyway,” Ebreo said.

She said she had nowhere to go.

“Why are they (government officials) so hard on us? Why are they not doing the same thing to other wetland occupants?” she said.

“It is not fair for them to say we are illegal occupants because we have all the permits. If they want us out, they should at least show mercy by letting us find a place to go,” she said.

At Wetland No. 6, at Barangay Manoc-Manoc, there are also “illegal occupants” but they appear to be holding the government at bay with their demand of relocation.

The wetland is marked for rehabilitation by Boracay Tubi Systems Inc., owned by businessman Lucio Tan.

Work cannot start, however, because the government cannot force the 31 families who occupy the area without a relocation site.

The residents will stay there longer, but they stand to benefit little from the reopening of Boracay because of the limit set on visitor traffic and the stiff regulations that could make the island less attractive to holidaymakers.

The Boracay Foundation, the main business industry group on the island, did not comment on the new rules but welcomed the return of tourists.

“We are pleased that workers have now [gotten] their jobs back and will now be able to do what they love and provide for their families,” the group’s executive director, Pia Miraflores, said, referring to workers at the businesses that met the new requirements.

“Everyone, big and small, has sacrificed a lot during the six-month [closure],” she said. —Reports from Melvin Gascon and AFP