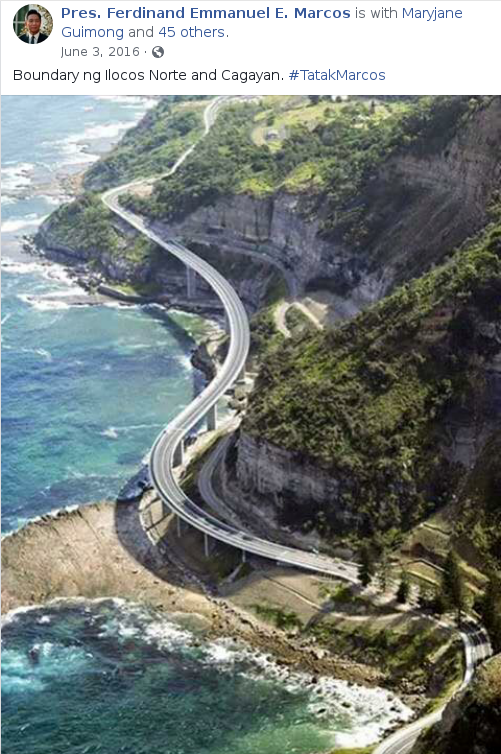 Photo of the bridge allegedly built during the Marcos era but was actually the Sea Cliff Bridge in Wollongong, Australia.

A viral Facebook post claiming a bridge was built during the Marcos regime is fake, the Agence France Presse (AFP) warned on Wednesday.

The AFP, however, said the photo was the Sea Cliff Bridge in Wollongong, Australia which was taken by Australian photographer Dee Kramer.

“I confirm that Dee Kramer took the image in question — and that it is of the Sea Cliff Bridge in Australia,” Freeman told the AFP.

Mark Sleigh, general manager of Destination Wollongong tourism agency, told AFP that the photo was captured during the building phase of the bridge.

Marcos declared martial law in the Philippines on September 21, 1972. Human rights abuses were rampant during the martial law era, with over 100,000 victims, according to Amnesty International.

The fake news on the bridge was shared online over 24,000 times by Facebook accounts with combined followers of 446,751. These accounts are supporters of Marcos family and President Rodrigo Duterte. /ee

All beside the point