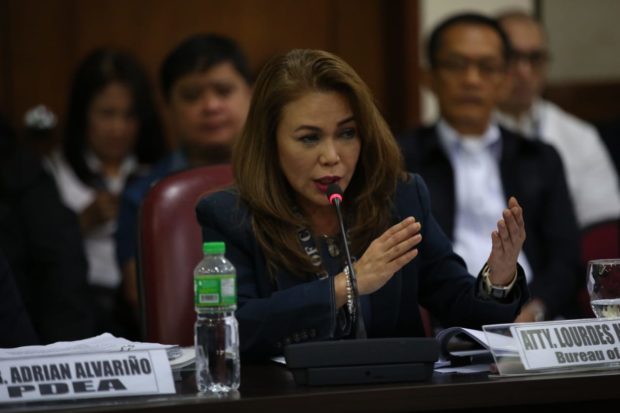 Lawmakers questioned on Wednesday the credibility of former Customs X-ray division chief and deputy collector of NAIA Lourdes Mangaoang who stood by her earlier assessment that the four magnetic lifters discovered in Cavite contained 1-ton of shabu worth P6.8 billion.

Bureau of Customs (BOC) chief Isidro Lapeña earlier demoted Mangaoang from being the x-ray division head to a post in the compliance monitoring unit (CMU), which the latter admitted she was “not happy about.”

“In your case, are you supposed to be entitled to full faith considering that there is a strong reason for me to believe you have improper motive after having been sacked by the Bureau of Customs commissioner as deputy collector at NAIA and later transferred to the CMU of the BOC?” Antipolo 2nd District Rep. Romeo Acop asked during the second joint inquiry of the House committees on dangerous drugs and good government and public accountability.

An apparently irked Mangaoang, in turn, cried foul over the lawmaker’s insinuations.

“Ako po ay nandito para magsabi ng totoo… wala pong ill-will… dahil kung hindi po ako ininvite dito ay hindi po ako pupunta dahil (I am here to tell the truth without ill-will because if I weren’t invited, I wouldn’t come because) the reason that I’m here is because I was invited and why do I feel that I am being prosecuted as if I am the one that is responsible,” she said.

(I was invited as resources speaker, so why are you saying I have ill-will? That is unfair. If you don’t need me, I can leave.)

Prior to this, Misamis Occidental 2nd District Rep. Henry Oaminal also questioned why Mangaoang conducted an ocular inspection in the warehouse where the lifters were found. She said she did this to personally see the site as preparation for her appearance at the Senate probe.

“We’re here to get your opinion so it could help our investigation,” he added.

Mangaoang then apologized to Acop and the committees but Acop maintained his conclusion against her.

“Accordingly, although she cannot be disqualified as a witness, her credibility remains questionable since an improper motive exists on her part which makes her testimony untrustworthy and unreliable. That is my personal conclusion your honor,” Acop said.

Philippine Drug Enforcement Agency (PDEA) Chief Aaron Aquino also maintained in previous hearings that the lifters contained drugs which he had said might have been circulating in the country now. /je

READ: Lapeña says drug syndicates may be behind hatchet job against him | Customs chief says drug rings behind smear drive