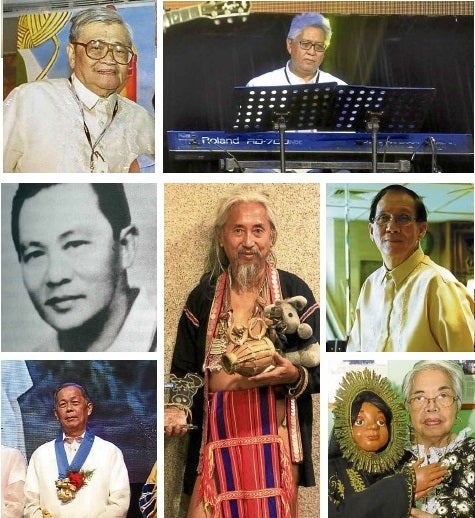 Also to be inducted into the Order of National Artists (ONA), the highest Philippine honor bestowed on practitioners of the Western arts, are Cebu-based writer-scholar Resil Mojares (literature) and dramatist-puppeteer Amelia Lapeña-Bonifacio (theater).

To be named to the ONA posthumously are Hiligaynon writer Ramon Muzones (literature) and cartoonist Lauro “Larry” Alcala (visual arts).

Gamaba awardees were screened and nominated for Malacañang’s proclamation by the National Commission for Culture and the Arts (NCCA).

The ONA awardees passed a three-tiered screening process, the last of which involved the boards of the NCCA and the Cultural Center of the Philippines and living national artists electing the final nominees for proclamation.

Mañosa (born Feb. 12, 1931) is an internationally known architect. He was in fact made national artist by President Gloria Macapagal-Arroyo in 2009 but since there was public uproar over the inclusion of other artists who did not pass the screening and whose artistic credentials were questioned, the Supreme Court disregarded the proclamation in a 2013 ruling.

An architecture graduate of the University of Santo Tomas, Mañosa is known for his modern vernacular architecture: He incorporates Philippine materials and design motifs into his buildings that have become landmarks such as the Coconut Palace, San Miguel Corp. Building and Edsa Shrine.

He was student council president of the University of the Philippines (UP) Diliman and later studied at Wharton University.

De Guia abandoned a promising corporate career as hotshot manager and executive and, renaming himself Kidlat Tahimik, turned to film and visual arts.

He became a pioneering indie filmmaker in the 1970s whose works were witty and whimsical postcolonial critiques.

He was catapulted to international renown when his expanded “home movie,” “Mababangong Bangungot” (Perfumed Nightmare), was chosen to compete in the Berlinale in 1977 and won the International Critics Prize.

The film was distributed in the United States by Francis Ford Coppola and was screened to wide acclaim, with prestigious critics and scholars such as the Marxist Fredric Jameson writing extensive papers about it and other Kidlat Tahimik movies such as “Turumba.”

Mojares (born Sept. 4, 1943) is an internationally renowned and much respected essayist and cultural studies scholar.

An award-winning fictionist in English in the mid-1960s, he turned to critical and cultural writing in the 1970s and became known for his literary history and scholarship (“Origins and Rise of the Filipino Novel: A Generic Study of the Novel Until 1940”), regional studies (“Cebuano Literature”), and regional biography (books on the Osmeñas, Aboitizes and Archbishop Jose Ma. Cuenco).

His books starting in the 1980s signaled the interdisciplinary shift of cultural scholarship as shown in his melding of urban planning, architecture, and history in “Casa Gorordo in Cebu: Urban Residence in a Philippine Province”; and blending of theater and social dynamics in his study of the “linambay” or the Cebuano “moro-moro” in “Theater in Society, Society in Theater.”

Cayabyab (born May 4, 1954) finished music composition at the UP College of Music and was the first grand prize winner of the Metro Manila Pop Music Festival in 1976 for “Kay Ganda ng Ating Musika,” one of the anthems of the OPM (Original Pilipino Music) movement in the 1970s.

He went on to become a highly successful pop-music composer and producer, his songs sung by very popular singers such as Basil Valdez, Hajji Alejandro and Ariel Rivera.

He has composed for the movies (“Karnal,” “Hihintayin Kita sa Langit,” “Aguila”) and the musical theater, notably “Larawan,” the musical theater (and later film) adaptation of Nick Joaquin’s “Portrait of the Artist as Filipino,” and “Katy,” the musical biography of singer Katy de la Cruz. He has also done liturgical music.

In 1974-75, through a Fulbright grant, she researched on Asian traditional theater.

She made pioneering research work on children’s theater in Asia and incorporated Southeast Asian and Japanese theater traditions into her dramatic productions.

Alcala (1926-2002) was a wildly popular cartoonist. His most popular comics were “Islaw Palitaw” and “Kalabog en Bosyo.”

He also created the first locally produced animated cartoons in the 1960s for TV commercials.

In 1997, the Philippine Board on Books for Young People proclaimed Alcala “Dean of Filipino Cartoonists.”

Muzones (1913-1992) was a best-selling Ilonggo writer who wrote at least 61 novels in Hiligaynon, many of them serialized in—and dramatically boosted the circulation of—regional magazines.

At one time, he was speechwriter and political adviser to the controversial maverick Ilonggo politician Rodolfo Ganzon. His last major novel, “Shri-Bishaya” (1969) recreated the odyssey of the 10 Bornean datus to the Philippines.