Trillanes told: It’s not over 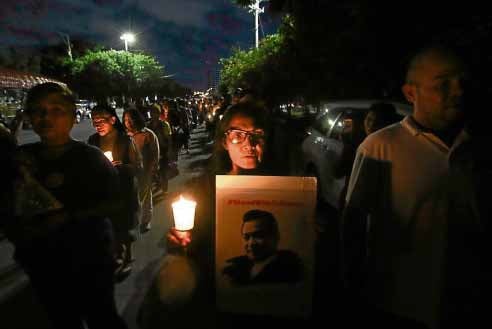 PRAYER POWER Supporters of Sen. Antonio Trillanes IV hold a procession after a Mass for him in front of the Senate offices. —RICHARD A. REYES

It might be too early for Sen. Antonio Trillanes IV to celebrate a Makati City court’s ruling rejecting a bid to have him arrested, as Malacañang vowed to take the battle to revive his 15-year-old coup d’état case for the 2003 Oakwood mutiny all the way to the Supreme Court.

In a press briefing on Tuesday, Panelo said Solicitor General Jose Calida intended to elevate the matter to the Court of Appeals.

Calida will not file a motion for reconsideration but “go immediately to the Court of Appeals” to secure an arrest warrant against Trillanes, said Panelo.

Panelo claimed that the court decided on procedural matters erroneously, mainly on evidence submitted by Trillanes to support his claim that he filed an amnesty application.

“There are questions that can be properly raised in the Court of Appeals and subsequently in the Supreme Court,” he said.

But Justice Secretary Menardo Guevarra said on Tuesday that it was the Department of Justice (DOJ), not the Office of the Solicitor General, that will decide the government’s next course of action.

“It is the DOJ [that] will decide what legal step to take,” Guevarra told reporters.

He later announced that the DOJ had decided to seek reconsideration of the Makati court’s decision.

The DOJ, he said, will file a motion by Friday.

Detained Sen. Leila de Lima cautioned Trillanes against letting his guard down as a result of the Makati court decision.

“The efforts of [President] Duterte and the DOJ to put Senator Trillanes behind bars do not end here,” the senator said in a statement issued from detention.

“They will continue to move heaven and earth to get what Duterte wants, even if this means doubling their efforts to pressure the judiciary all the way up to the Supreme Court,” she said.

“It is clear from Judge Soriano’s decision that he carefully considered the testimonies of the witnesses,” Drilon said.