Comelec asked: What about Abalos? 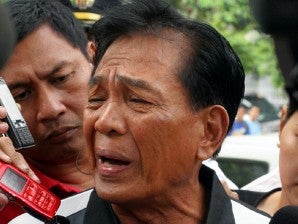 Why does the Commission on Elections seem to be dragging its feet in filing an electoral sabotage case against its former chair, Benjamin Abalos Sr.?

Sen. Aquilino ‘Koko’ Pimentel III, who heads the Senate committee on electoral reforms, on Friday questioned the delay, noting that a joint Comelec and Department of Justice panel had recommended the filing of charges against Abalos about two weeks ago.

By contrast, he said the Comelec acted on the same recommendation in the case of former President Gloria Macapagal-Arroyo, filing electoral sabotage charges against the Pampanga congresswoman within a day of receiving the panel’s recommendation.

“So is this proof that the government is indeed only after GMA?” the senator asked.

Or, he continued, was this a manifestation of the “protect-your-own” mentality at the Comelec which Abalos used to head?

Pimentel pointed out that the case against Arroyo, who has been in hospital detention since a Pasay City court ordered her arrest on Nov. 18, rested only on the testimony of a lone witness, Norie Unas. But the government had “two to three” witnesses against Abalos, he said.

“Why is the Comelec taking its time before filing a case against its former chair when it was able to speedily resolve the case against Gloria?” said Pimentel, the original complainant in the case that brought the former President to heel.

According to Brillantes, the case against Abalos and other co-respondents of Arroyo would be filed next week, after Comelec lawyers are able to untangle some “procedural problems.”

“There is some sort of complication, but it is just procedural. But we are definitely filing against Abalos,” he said.

In fact, a case of electoral sabotage was filed against Radam by the Comelec last February but she was never arraigned because she disappeared.

Brillantes said the Department of Justice wants the two “exonerated,” and Radam and Martirazar have applied to become state witnesses.

“This will require some documentation and some arguments for motions to be filed in court,” he said.

But he stressed that the Comelec would have the final say on the matter.

He said the new case would be filed “as soon as they have completed it.”

“Our lawyers are already working on this. At the very most, it might be filed maybe Monday. We’ll be working overtime,” he said.

Radam and Martirazar surfaced at the DOJ last September and claimed that Abalos and other officials had ordered them to “doctor” the results of the elections in South Cotabato and North Cotabato provinces, respectively.

They claimed that then Comelec regional director Michael Abas and two “handlers” from military intelligence, identified as Maj. Joey Leaban, now deceased, and Capt. Peter Reyes, were also involved in the cheating operations.

Brillantes stressed that he thought the case against Arroyo, as far as the South Cotabato and North Cotabato cheating was concerned, was weak because she was not directly tagged by Radam and Martirazar.

“We cannot yet see the connection, we’re going for further investigation insofar as the participation of the several others [is concerned],” he said.

But Pimentel is confident that the case against Arroyo was airtight despite there being only one witness. He noted that many cases under Philippine laws have involved convictions based only on the testimony of one witness.

He said the account of Unas, who claimed to have heard Arroyo instruct the then Maguindanao Gov. Andal Ampatuan Sr. in a private meeting to ensure the victory of all 12 administration senatorial candidates in the 2007 elections, was “damaging” to Arroyo.

He differentiated between Unas’ account and that of Ahmad Mamucao, reportedly a former information officer of Ampatuan who also claimed that Arroyo had told a group of supporters to ensure a 12-0 victory for her candidates.

“From a lawyer’s point of view, a marching order of 12-0 does not necessarily amount to electoral sabotage because it could be synonymous only with a straight vote and there’s nothing wrong with that,” he said.

“What is damaging is the account of Unas because Arroyo [allegedly] gave the instruction in a private meeting with Andal Sr. and he was there. The instruction was to the effect that Andal Sr. should ensure the victory by hook or by crook,” said the lawyer and bar topnotcher.

Pimentel’s committee has tentatively set another hearing on Dec. 15 on alleged cases of electoral fraud under the Arroyo administration. He said he would summon former Army sergeant Vidal Doble, a witness in the “Hello Garci” wiretapping scandal.

In 2005, Doble claimed that military intelligence had wiretapped some election commissioners and caught the then President talking to one of the commissioners about a one-million vote lead in the 2004 presidential race. Arroyo emerged the winner of that election, defeating the late movie star Fernando Poe Jr.

The tapes, which sparked charges that Ms Arroyo had phoned then Election Commissioner Virgilio Garcillano to rig the results of the 2004 elections in her favor, almost brought down the Arroyo government.

The “Hello Garci” will potentially figure in the many other electoral sabotage cases that the Aquino government is threatening to bring against Arroyo.