Sugarcane farm massacre survivors: We just want a share of the land 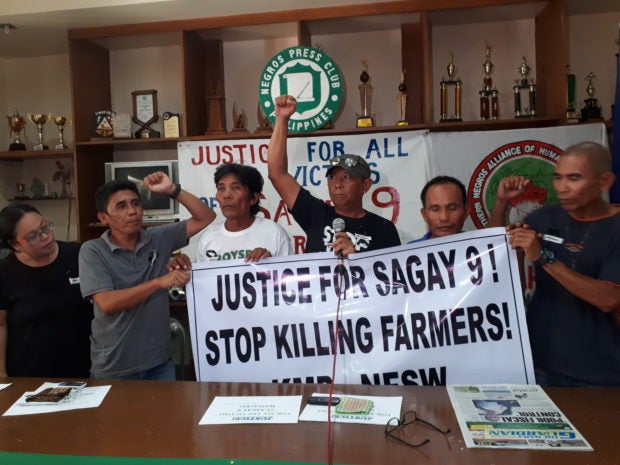 BACOLOD CITY – Seventeen-year-old Marchstil Sumicad went to the makeshift tent on Saturday afternoon to visit his father, who was among the 13 persons who had just occupied a section of a sugar farm in Sagay City, Negros Occidental.

In the evening, Marchstil was dead along with eight others who were shot while resting inside the tent in the middle of a sugarcane field in Hacienda Nene, Purok Pine Tree, Barangay Bulanon, Sagay City about 9:45 p.m. Saturday.

His father, Bobstil, survived because he left the tent to answer to the call of nature.

“When I heard the gunfire, I prayed my son would be spared. When the gunfire ended and the attackers had left, I ran to our makeshift shelter to find the lifeless body of my son,” said Bobstil in Hiligaynon.

Marchstil was hit in the neck and other parts of the body.

“All I could do was cradle him in my arms and weep. He was gone and there was nothing I could do,” Bobstil said.

Police said not all those who were killed were farm workers.

At least 85 percent of Bantigue’s body was burned after sugarcane wastes doused with gasoline was poured on him.

The two female fatalities had burns, too.

Marchstil, a Grade 9 student at the Barangay Bulanon Hight School, was the youngest of the six children of Bobstil and Elenita.

The couple, who lives near the farm, used to be farm workers of Carmen Tolentino, owner of Hacienda Nene, but was later dismissed.

In the case of Bobstil, he said he was considered a “dumaan (old timer)” in Hacienda Nene since he started working there when he was a young boy in order to have money for school.

He later worked as a mechanic helper and driver of the hacienda owner.

But he and his wife were given a 15-day notice to vacate the land some time ago – the date he could not remember – forcing him to catch fish just to make a living.

Now 52, Bobstil said he joined the National Federation of Sugarcane Workers (NFSW) because he wanted to be a beneficiary of the Comprehensive Agrarian Reform Program (CARP) as he wanted to provide a better life for his children.

“I just want to feed and send my children to school,” he said.

At least 32 farmers – some of whom were among the fatalities – applied for CARP coverage in Hacienda Nene in 2000, said massacre survivor Rene Manlangit, 47, and member of the NFSW.

He said no approval was made despite a notice of coverage that had been issued because they were told that Tolentino had issued a deed of donation, giving the property to 25 people.

They were also told the property had been mortgaged to the bank, he added.

Stephen Leonidas, Department of Agrarian Reform (DAR) director for Western Visayas, confirmed that the owner issued a deed of donation giving the 76-hectare property to 25 individuals.

“So when a notice of coverage was issued in 2014 it was not enforced because it was found that there were already 25 co-owners to the land,” he said.

Manlangit said they pursued their application for the coverage of the 32 as legitimate claimants to a share of the land.

But, he added, the DAR had failed to act on it.

On Saturday, they decided to enter the farm to till the land on Saturday.

Malangit, and Rogelio Arquillo, 49, who works as a bus driver, had brought the NFSW members to occupy Hacienda Nene.

Both survived the massacre since they left the tent to charge their cellular phones at a nearby house.

When they heard the gunfire while charging, Arquillo said he called his daughter to seek police help.

But his teenaged nephew, Ughayon, was among those who died, he said.

Danilo Cañete recalled they were resting when a group of men armed with rifles arrived and started shooting at them from 30 meters.

“They then moved closer to finish off those injured,” he said.

Cañete said he survived because he hid behind a sack of rice. However, he said that when the armed men started pouring gasoline on the makeshift shelter, he ran and hid under a nearby house.

He said he could not identify the killers because it was dark. The shooting lasted for about 15 minutes, he added.

Bobstil, for his part, joined the takeover, hoping to be given a land to till on the farm where he had worked before.

He left the tent to defecate behind the tall sugarcane plants.

He had just sat down when he heard the gunfire.

He said he wanted to run back to save his son, Marchstil, who just went there to visit him and see what it was like to be in the farm.

He, however, decided against it because he knew he too would be killed.

Bobstil recalled that Marchstil had enjoyed staying in the farm since he found it “very peaceful.”

It was just ironic that the young boy would perish in violence in a field he thought was a place of peace. /kga