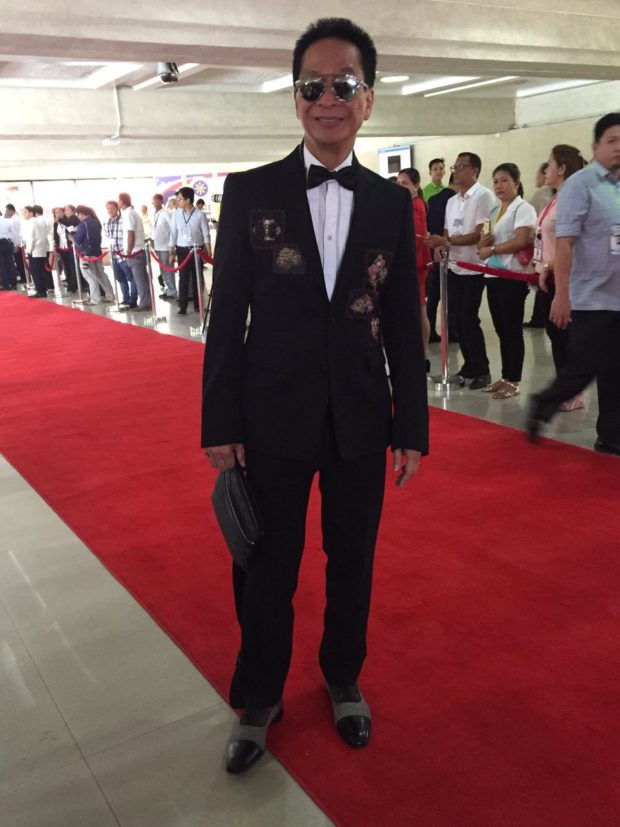 Salvador Panelo wears a flower-patched tux for the 2017 State of the Nation Address of President Rodrigo Duterte. (INQUIRER.net file photo)

Is it the the end of his sartorial flamboyance?

Presidential spokesperson Salvador Panelo, who used to turn heads with his groovy outfits, has decided to just wear coat and tie or barong tagalog during Palace press briefings.

For his first briefing as President Rodrigo Duterte’s spokesman on Oct. 12 in Malacañang, Panelo wore a coat and tie.

In his succeeding briefings, he would either wear a coat and tie or a barong tagalog.

He said he just wanted to be lawyer-like when facing the press.

[In other words, if you’re appearing in court you should wear what’s required.]

During the visit of Duterte the to Malaysia in November 2016, Panelo was seen wearing tattered jeans and a shining black leather jacket.

In the 2017 State of the Nation Address (Sona) of President Rodrigo Duterte, he wore a flower-patched tuxedo.

The Palace official was also seen wearing an eye-catching gold pink ring with a black flat stone in the center during his tête-à-tête with the President in September.

But will he drop wearing his groovy outfits?

“I wear my tattered jeans during weekends,” he said in a text message to INQUIRER.net.

“During official events I wear either a barong tagalog or a coat and tie. Since a news briefing is an official event I have to wear a formal attire. During Sundays I’m in smart casual,” he added. /atm