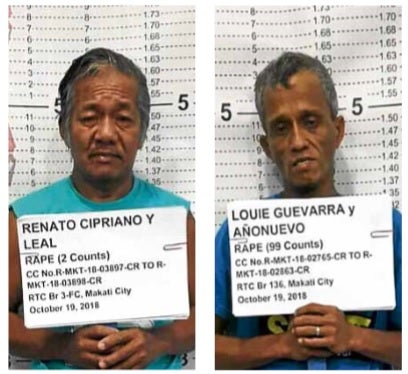 Five men who were at the top of the Metro Manila police’s wanted lists in four cities have been arrested.

One of them was facing 99 counts of rape in Makati, making him the most wanted man in the city.

Louie Guevarra was arrested by policemen inside his house on Rodil Street, Barangay Carmona, on Friday night.

The arrest of the 47-year-old Guevarra was ordered last month by Judge Rico Sebastian Liwanag of the Makati Regional Trial Court (RTC) Branch 136 where he was facing the multiple rape charges.

“The victim became a sex slave of Guevarra, but she was able to record every instance [in which] she was raped. It was only later on that she filed charges with the Makati police, which endorsed them to the city prosecutor for direct filing,” Ines added.

A crime of rape has a reglementary period of 36 hours, during which the police can arrest a suspect without a warrant from the courts.

The Makati police also arrested on Friday the city’s second most wanted man, 62-year-old Renato Cipriano, in his house on Zapote Street.

The two suspects were detained at the Makati police headquarters with no bail recommended for their release.

A tricycle driver who became San Juan City’s most wanted man after he killed his mother-in-law’s housemaid in November 2017, was arrested at Baseco Compound in Tondo, Manila, on Saturday night.

San Juan policemen caught up with Jerry Bulalaque, 34, after they followed his live-in partner to the house where he was hiding.

Senior Supt. Dindo Reyes, San Juan police chief, said the suspect and the victim, identified as Yolanda Macasinag, had long been at odds with each other after the suspect threw away the 55-year-old victim’s “bagoong” (fermented fish sauce).

An argument broke out between the two, and Bulalaque stabbed the victim dead.

The suspect was arrested based on the warrant issued by Judge Caesar Buenagua of the San Juan City RTC Branch 160 in February.

In Marikina City, the police arrested the suspect accused of shooting two men dead in June 2017.

Quesada said the victims had just come from a court hearing involving drug charges when four men on two motorcycles blocked the taxi cab they were riding in.

Neri then reportedly shot the pair, who were reportedly on the drug watchlist.

The cabdriver was unhurt, but the victims were killed outright, according to the police.

Neri was arrested at 9:25 p.m. on Saturday at Minahan St., Barangay Malanday, based on the arrest warrant issued in February by Judge Felix Reyes of the Marikina RTC Branch 272.

Quesada said that they were still trying to determine if the suspect was a hired killer.

In Mandaluyong City, authorities finally caught the city’s most wanted man who had evaded them for almost eight years.

Jonas delos Santos, 36, was arrested at 6:45 p.m. on Saturday at Barangay Addition Hills for the murder of Rolando Marciano on June 26, 2010.

Judge Carlos Valenzuela of the Mandaluyong RTC Branch 213 had issued the warrant for his arrest.