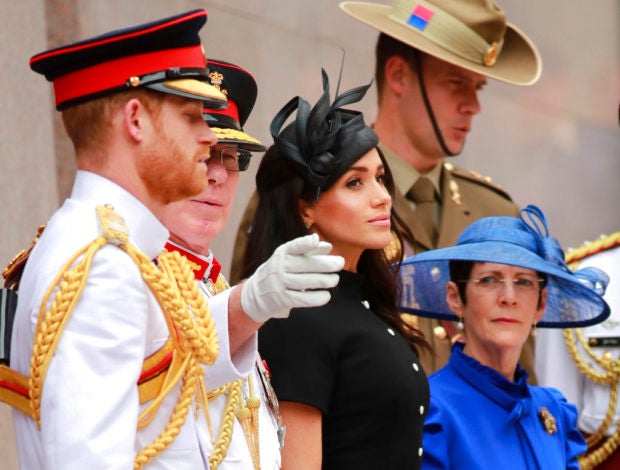 SYDNEY (AP) — Prince Harry paid tribute to Australian service members by opening a new wing of a war memorial on Saturday before opening the Invictus Games as he and wife Meghan continued their visit to Australia and the South Pacific.

A thus-far joyous debut royal tour by the couple, buoyed by news that they are expecting their first baby, turned solemn as the Duke of Sussex opened a long-awaited extension to the Anzac Memorial in downtown Sydney’s Hyde Park on Saturday morning.

The former British army captain and his wife laid a wreath of Australian native flowers at the steps of the memorial, as Prime Minister Scott Morrison, other dignitaries, and service men and women looked on. 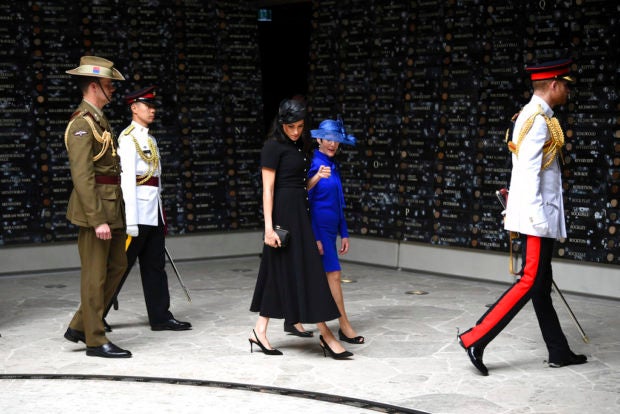 Britain’s Prince Harry, right, and his wife Meghan, center left, the Duchess of Sussex view the Hall of Service during the official opening of Anzac Memorial at Hyde Park in Sydney, Australia, Saturday, Oct. 20, 2018. Image: Joel Carrett/Pool Photo via AP

Harry and Meghan were then taken on a tour of the newly remodeled shrine, which was first opened in 1934 by Harry’s great-great uncle, Prince Henry, the Duke of Gloucester, but was left incomplete due to a shortage of funds during the Great Depression. A project worth 40 million Australian dollars ($28.4 million) has finally realized the memorial’s original design.

In a handwritten signed note pinned to the wreath, Harry wrote, “In memory of those who paid the ultimate sacrifice and in recognition of the men and women for whom the scars endure.”

Wearing the tropical dress of his regiment, the Blues and Royals, Harry unveiled a plaque that noted the extension was “opened by a grandson of the Queen.”

The wording was a nod to the original plaque Prince Henry unveiled 84 years ago, which noted that the memorial was “opened by the son of a king.”

Harry saluted as the Last Post rang out across Hyde Park, while Meghan, in a long black dress by New Zealand designer Emilia Wickstead, stood beside him.

The royal couple later visited Sydney Harbour’s Cockatoo Island, where Harry delighted some children by joining them in playing with remote-controlled cars. The couple visited the island to watch an Invictus Games event — the Land Rover Driving Challenge. 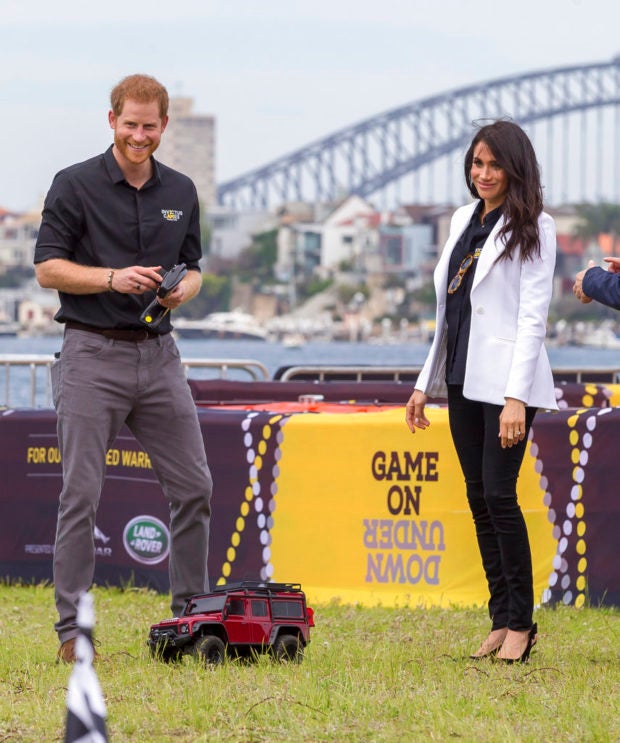 Britain’s Prince Harry, left, and his wife Meghan, the Duchess of Sussex are seen playing with remote control cars during the Jaguar Land Rover Driving Challenge on Day 1 of the Invictus Games on Cockatoo Island in Sydney, Australia, Saturday, Oct. 20, 2018. Image: Craig Golding/AAP Image via AP

Harry later officially opened the games in a ceremony on the Sydney Opera House forecourt that was delayed by an hour after the city was lashed by a late afternoon thunderstorm.

The Invictus Games, Harry’s brainchild and the focus of this tour, were founded by the prince in 2014. The sporting event gives sick and injured military personnel and veterans the opportunity to compete in sports such as wheelchair basketball, and to find inspiration to recover.

Harry and Meghan will also visit Fiji, Tonga and New Zealand during their 16-day tour. NVG