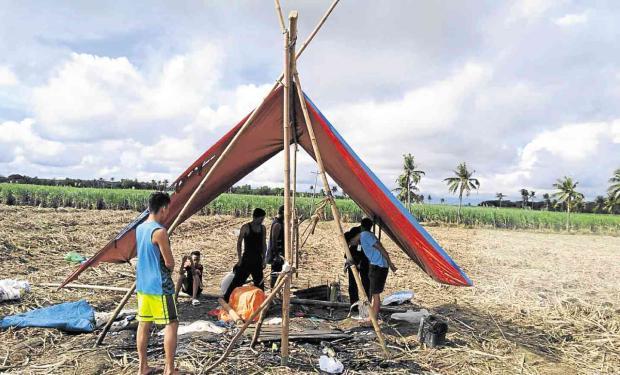 CARNAGE AT SUGAR FARM This tent pitched in the middle of Hacienda Nene at Barangay Bulanon in Sagay City was the scene of a bloodbath on Saturday night, Oct. 20, 2018, when unidentified gunmen shot dead nine farmers who occupied the sugar farm to plant vegetables. (Photo by BRYAN MORDEN)

The Philippine National Police is blaming communist rebels for the killing of nine farmers in Sagay City on Saturday, but militant lawmakers suspect the military and militia forces were behind the attack in Negros Occidental province.

Chief Insp. John Bulalacao, Western Visayas police director, said in a statement on Sunday that elite forces were pursuing the killers, who, he claimed, were possibly members of the communist New People’s Army (NPA).

Bulalacao said the Communist Party of the Philippines (CPP) and the NPA, its armed wing, were carrying out “Oplan Bungkalan at Okupasyon,” a plan to cultivate and occupy private and government land using their “mass base.”

But the militant Makabayan bloc in the House of Representatives demanded an independent investigation, suggesting that the military and militia forces could be responsible for the killings.

“We demand an immediate and impartial probe,” former Bayan Muna Rep. Neri Colmenares said in a statement on Sunday.

“We will not stop until justice has been served,” Colmenares said.

Killed were nine farmers, three of whom were women and two were minors.

Bulalacao said the victims were fresh recruits of the Negros Federation of Sugar Workers (NFSW).

NFSW condemned the killings. The labor group said the victims were forced to plant vegetables and root crops to feed their families on idle sugar land covered by the government’s agrarian reform program but remained undistributed to farmers.

Investigators said the sugar plantation was the subject of a land dispute.

The sugarcane on the plantation owned by Carmen Tolentino had been harvested, and the farmers went in and pitched a tent there, according to Senior Supt. Rodolfo Castil, Negros Occidental police director.

Castil said the farmers were resting in the tent on Saturday night when five to seven gunmen arrived and opened fire on them.

Earlier reports placed the number of gunmen at about 40.

Castil said two of the farmers managed to escape during the shooting while three were not there during the attack.

He said two of the victims were armed and appeared to have fought the attackers.

Gov. Alfredo Marañon Jr. and his son, Sagay Mayor Alfredo Marañon III, condemned the killings and offered P500,000 for information that would lead to the identification and arrest of the killers.

Colmenares, who hails from Negros Occidental, said Brig. Gen. Eliezer Losañes, commander of the 303rd Infantry Brigade, had previously accused farmers involved in the land cultivation system in the province of being NPA members.

“That is really absurd because the issue of land is a legitimate issue. This is an attempt of the Duterte government to quell any form of protest by criminalizing legitimate demands,” Colmenares said.

Anakpawis Rep. Ariel Casilao condemned the “barbaric and brutal murder” of the farmers.

Casilao said the latest killings brought to 45 the number of peasants to be killed on Negros Island since President Duterte came to power in June 2016.

Among those killed, he said, was party-list lawmaker Flora Jemola, chair of the Sagay chapter of NFSW.

He said Jemola was stabbed dead by killers believed to be militiamen from the Army’s 12th Infantry Battalion on Dec. 21, 2017.

Another NFSW leader, Ronald Manlanat, was killed by the same militiamen two months later, he said.

Casilao said he would introduce a resolution for an inquiry into Saturday’s killings in Sagay. —With a report from AP