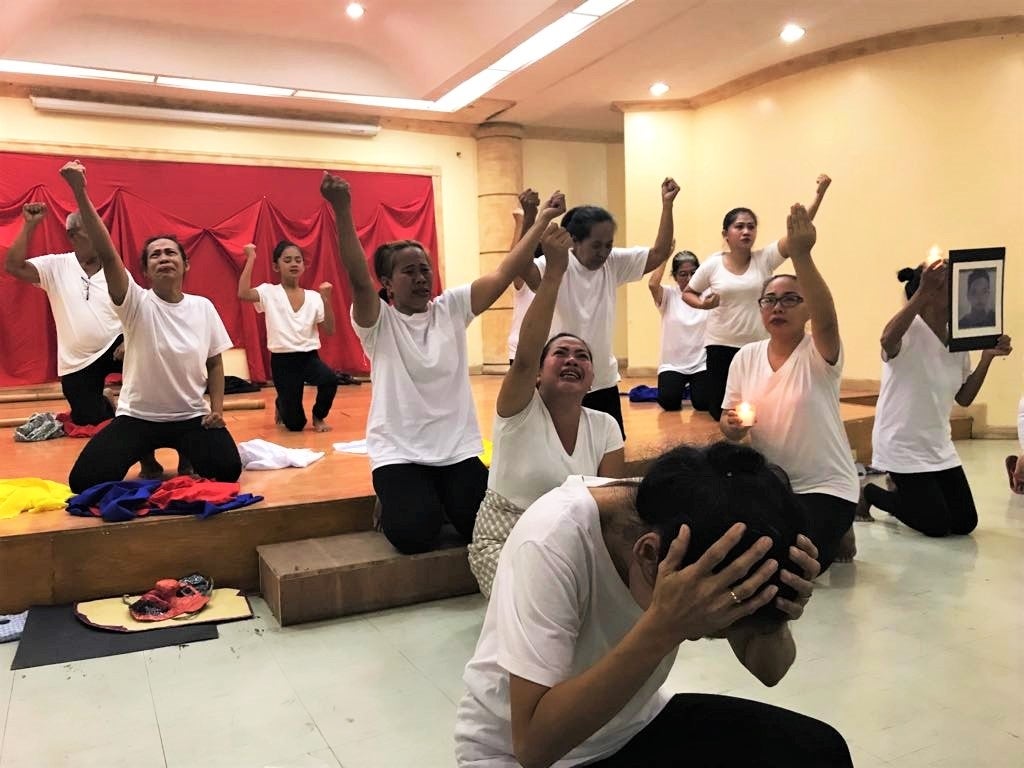 STAGED PROTEST Relatives of victims of summary killings engage in theater therapy, part of the psycho-spiritual component of Paghilom’s five-tier rehabilitation program to relieve them of their harrowing experiences. —PHOTOS BY MARIEJO S. RAMOS

They mock the follies of the Duterte administration with a uniquely stimulating take on Ex Battalion’s “Hayaan Mo Sila” and resist fake news with an evocative rendition of the 1955 classic “The Great Pretender.”

The soulful tunes and lyrics  grab the heart in a vice-like grip and won’t ease up as the performers — members of families of drug war victims — turn their grief into a powerful protest.

But the show’s performers bear life stories that are far from being comical.

Among them are Randy delos Santos, uncle of 17-year-old Kian whose death last year sparked nationwide outrage against the war on drugs; Michelle Pineda, mother of 13-year-old Aldrinne who was shot dead by a policeman in a slaughterhouse in Tondo, Manila, and Mariza Hamoy, mother of 17-year-old Darwin who was allegedly killed by the so-called Davao Boys from the Batasan police station.

Together with 27 grief-stricken widows, siblings, mothers and orphans of the drug war, they drew a mix of tears, laughter and applause during their theater showcase, a component of Fr. Flavie Villanueva’s “Paghilom” program,  at De La Salle Araneta University on Tuesday.

For 12 Saturdays, Paghilom  gathers families of victims of extrajudicial killings (EJKs), most of them from urban poor communities, to undergo a five-tier rehabilitation program.

Ever since its launch in 2016, Paghilom has provided food and health-care services, psycho-spiritual intervention, and legal, education and livelihood assistance to around a hundred families in three batches.

The theater therapy is part of Paghilom’s psycho-spiritual component, which includes a three-day workshop on writing and acting.

“They were clueless about theater, with zero experience on stage. But they came here to give us a show taken from their own harrowing experiences — from their own hearts — that they chose to share with us,” Villanueva told an audience of Church leaders, students, academicians, drug war victims and human rights defenders, including Sen. Risa Hontiveros, recently.

The play opens with an enactment of a 2016 poem written by Jesuit priest Fr. Albert Alejo, “Sanayan lang ang Pagpatay”:

As the play progresses from comedy to tragedy, in scenes after scenes, the audience experiences how these grim lines represent the tragic moments of around 20,000 families who have lost their loved ones to the bloody war on drugs.

During the first part of the play, a young girl holding a long metal chain is juxtaposed with an adopted image of the Nativity: a young mother from an impoverished household holding an infant in her arms, while the father quietly stands beside them.

“Duterte forever!” they shout at the top of their lungs.

It’s a symbol of hope, but also a critique, of how the lower class pinned their aspirations on President Rodrigo Duterte’s promise of change during the 2016 elections, only to be left more miserable by his administration’s antipoor policies.

The somber theme continues in Part 2, a series of lampoons against the government through short skits and dances mixed with recorded voice-overs and digital sound effects. 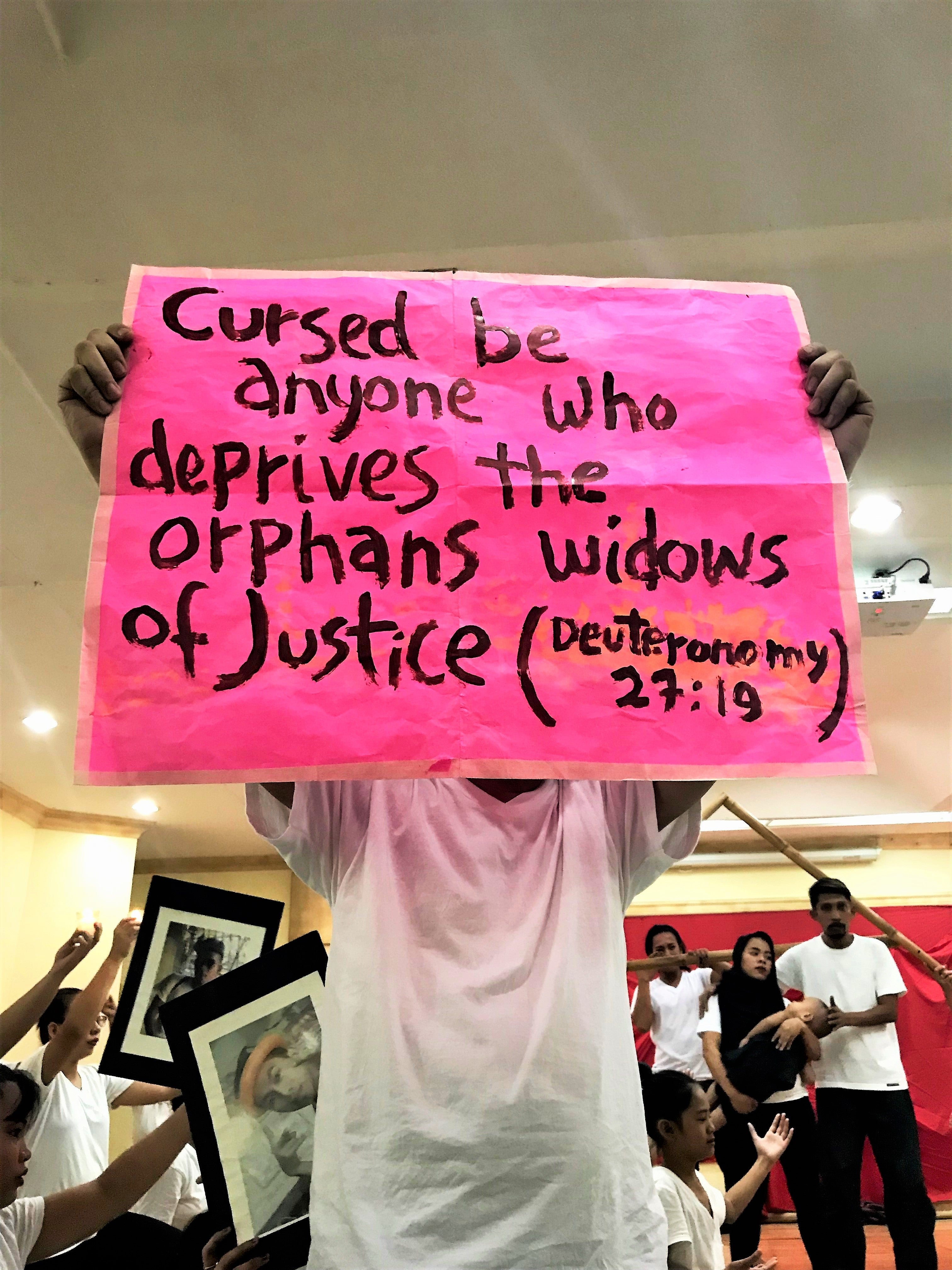 IF WORDS CAN KILL Bearing a life story that is far from comical, a performer in the parody curses at the perpetrators of extrajudicial killings.

The actors bravely express their opinions on controversial issues that affect the poor, such as the drug war, TRAIN (Tax Reform for Acceleration and Inclusion) law, soaring inflation, fake news, the government’s diplomatic strategy in the South China Sea, Charter change, as well as political persecutions of the lumad (indigenous people in Mindanao), Church leaders and human rights activists.

But the fanfare was short-lived in that presentation.

One by one, they took off the mask of fake smiles and laughter to narrate their own stories of grief and loss.

For Lita (not her real name), the tears welled and flowed as she recalled the night her son was killed in a buy-bust operation on Oct. 27, 2016.

Four armed men barged into the family home and shot her son multiple times. Police claimed he was killed for fighting back, nanlaban.

“Was killing the only option?” she cried. “I couldn’t take it, I just wanted to die when I lost him. Enough!”

The 57-year-old mother takes multiple jobs so she can feed the three kids her son left behind.

One of them, 11-year-old Jenna (not her real name), was the youngest among the cast of performers. The young girl took her rage to the stage as she spoke to a tearful audience.

“Why did you have to kill my papa?” she asked. “I wouldn’t be able to play with him anymore.”

As they described their painful stories, framed pictures of their slain loved ones were paraded across the room. Their sobs echoed on quiet walls.

“This part hardly needed acting,” said Albert Saldajeno Jr., a pedagogical creative artist who directed the play. “We had to record their voices, so if they broke down at any point, the stories will continue.”

Saldajeno explained that using narration as theater style required a deep understanding of how power and knowledge influenced the lives of these families.

What are the issues that matter to them, he would ask.  How much are they willing to share?

“This is not so much an aesthetic performance but a form of therapy, where we teach them to use their own voices and take control of their emotions,” the theater director said.

For Hamoy, this kind of performance art allows her to momentarily forget about her troubles.

“I only had a day to practice for the play, but they all boosted my confidence that I could do it. I’ve always loved dancing and performing,” a cheerful Hamoy told the Inquirer after the show.

In an order issued on July 12, but which the family learned only last September, the Office of the Ombudsman dismissed the murder charges against the 16 Batasan policemen suspected of involvement in the killing of Hamoy’s son and four others in a buy-bust operation in Payatas, Quezon City, on Aug. 15, 2016.

Two weeks later, her husband Danilo was arrested together with four other men by the Batasan police in a “video karera” shop at Barangay Payatas, Quezon City. Police claimed they confiscated two sachets of “shabu” (crystal meth) from Danilo.

Ultimately, overcoming grief is only the first step toward achieving justice for the Hamoy couple and the families of the other victims of summary killings.

The same is true for Delos Santos, who remains hopeful that the judge would rule in favor of his nephew, Kian, and put his killers behind bars.

The promulgation for Kian’s case is scheduled on Nov. 29.

“While we’re waiting for the results of the trial, I have decided to help with the activities of the Church,” Delos Santos said.

For the families of drug war victims, true healing is indeed a journey that runs far and beyond a one-act play.