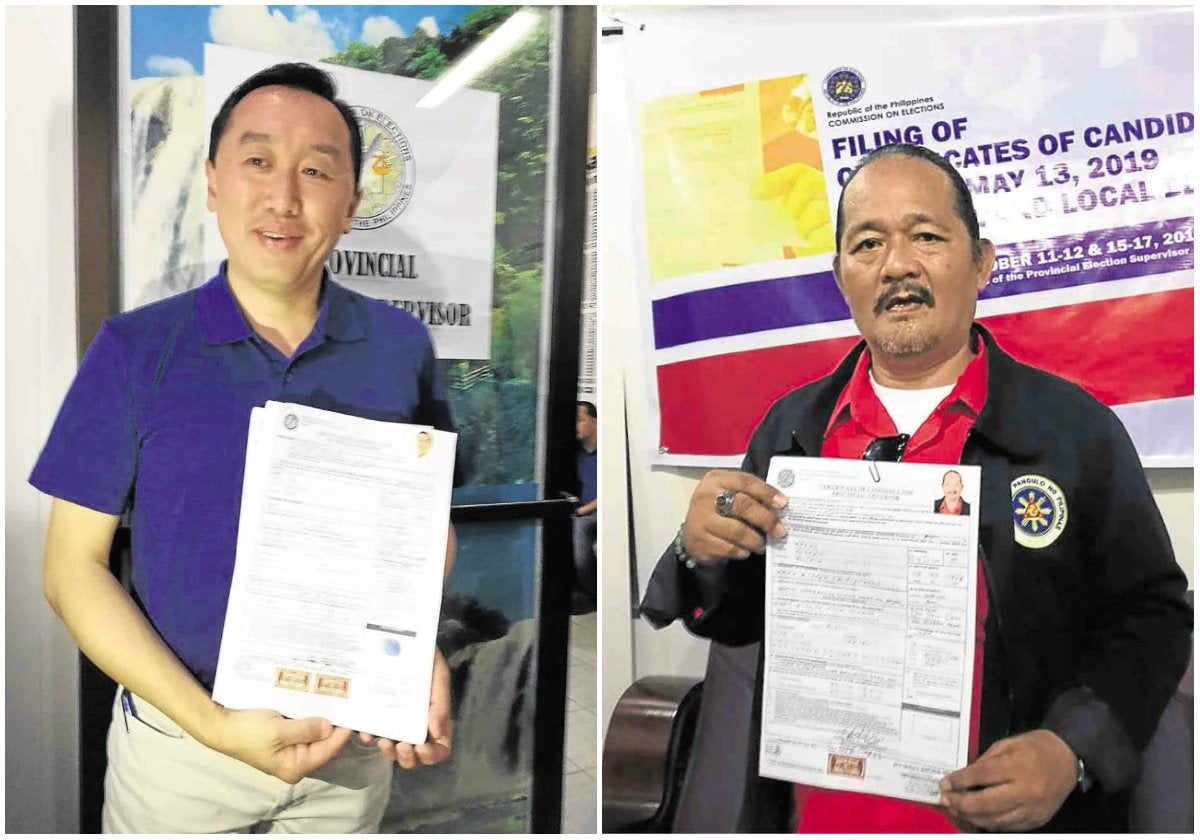 PARTY RIVALS Rep. Arthur Yap (left) holds his COC as a PDP-Laban candidate for governor, while actor Roberto Reyes, aka “Amay Bisaya,” has a similar endorsement by the party as gubernatorial candidate of Bohol province. —LEO UDTOHAN

Arthur Yap and Roberto Reyes found themselves in this situation after the ruling Partido ng Demokratiko Pilipino-Lakas ng Bayan (PDP-Laban) endorsed them both as official candidate of the party for Bohol governor.

Yap, incumbent congressman, and Reyes, also known by his screen name “Amay Bisaya,” filed their certificates of candidacy (COCs) on Oct. 17, the last day of filing. Yap did so around 2 p.m., and Reyes some two hours later.

Yap, former agriculture secretary who was linked to the fertilizer scam that plagued the Arroyo administration, submitted a certificate of nomination and acceptance (Cona) from PDP-Laban signed by Salvador Ty, PDP-Laban national vice president for the National Capital Region.

Eliseo Labaria, provincial election officer, said the Comelec would discuss the COCs of Yap and Reyes.

“The normal procedure is to accept their COCs,” Labaria said.

“It is ministerial for us to receive the COCs,” he said.

The case of two Conas would be brought to the Comelec en banc, he added.

Labaria said the poll body would determine if they both met requirements, and which one would be the official PDP-Laban candidate and the other, an independent.

Vice Gov. Dionisio Balite, who is running for third district representative, said he, too, was a victim of PDP-Laban’s unresolved issues.

“PDP-Laban is a brewing cauldron of intrigues and controversies,” he said on Thursday.

Balite said in the 2016 presidential elections when many opposition politicians were rooting for former Vice President Jejomar Binay, he stayed with PDP-Laban and supported the candidacy of then Davao City Mayor Duterte.

Balite became the highest ranking member of the PDP-Laban who was elected into office when the erstwhile head of PDP-Laban Bohol, Dr. Doloreich Dumaluan, was defeated in the mayoral race in Panglao town.

He said there were many attempts to entice him to assume the top leadership of PDP-Laban in Bohol, but he declined.

“This was aggravated by the claims of Dr. Dumaluan that he was still the leader of PDP-Laban Bohol,” he said.

“When the time of issuance of Cona drew nearer, the situation grew from bad to worse,” he added.

Balite was issued a Cona as PDP-Laban candidate for representative of the third district a week before he filed his COC.

He was told later, however, that the PDP-Laban leadership had declared Bohol to be a “free zone,” which meant the party’s national leadership would be the one to issue all Conas for the province.

An “arbitrator” from the PDP-Laban national office went to Bohol to instruct Balite to distribute Conas to candidates listed by Yap.