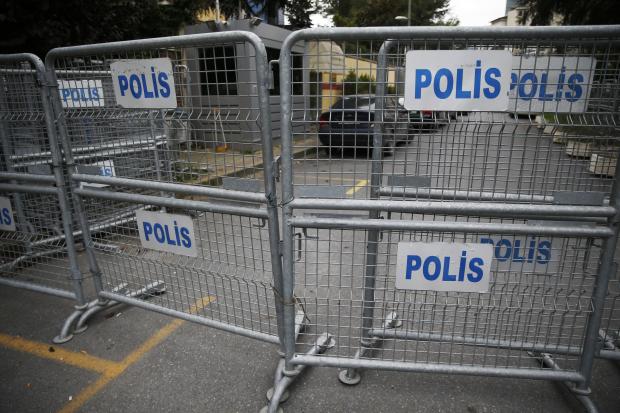 Barriers block the road leading to Saudi Arabia’s consulate in Istanbul, Saturday, Oct. 20, 2018. Saudi Arabia claims Saudi journalist Jamal Khashoggi died in a “fistfight” in consulate, finally admitting that the writer had been slain at its diplomatic post. The overnight announcements in Saudi state media came more than two weeks after Khashoggi, 59, entered the building for paperwork required to marry his Turkish fiancée, and never came out. (Photo by LEFTERIS PITARAKIS / AP)

ISTANBUL — Turkey will “never allow a cover-up” of the killing of Saudi journalist Jamal Khashoggi in Saudi Arabia’s consulate in Istanbul, a senior official in Turkey’s ruling party said Saturday after Saudi Arabia announced hours earlier that the writer died during a “fistfight” in its consulate.

The critical reaction by Numan Kurtulmus, deputy head of the Justice and Development Party, suggested that Turkey, which started its own investigation amid pro-government media reports that a Saudi hit squad killed Khashoggi, was not prepared to go along with the Saudi version of what happened to the writer.

“It’s not possible for the Saudi administration to wiggle itself out of this crime if it’s confirmed,” Kurtulmus said. He also said that Turkey would share its evidence of Khashoggi’s killing with the world and that a “conclusive result” of the investigation is close.

Another Turkish ruling party official also criticized Saudi Arabia, saying the kingdom should have given its explanation “before the situation reached this point.”

Leyla Sahin Usta, a human rights official in the ruling party, said it would have been “more valuable” if Saudi officials had earlier admitted that Khashoggi was killed in its diplomatic post.

Saudi Arabia initially denied any knowledge of the disappearance of Khashoggi, who vanished after entering its consulate on Oct. 2. But early Saturday, it admitted that he was killed there and said 18 Saudi suspects were in custody and intelligence officials had been fired. 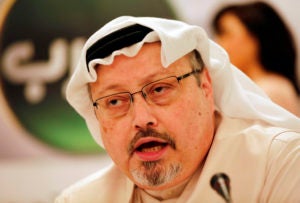 The overnight announcements in Saudi state media came more than two weeks after Khashoggi, 59, entered the Saudi Consulate in Istanbul for paperwork required to marry his Turkish fiancée, and never came out.

They also contradicted assertions in Turkish media leaks that Khashoggi was tortured, killed and dismembered inside the consulate, claims the kingdom had rejected as “baseless.”

But growing international pressure and comments by U.S. officials up to President Donald Trump forced the kingdom to acknowledge Khashoggi’s death.

While it fired officials close to Crown Prince Mohammed bin Salman, Saudi Arabia stopped short of implicating the heir-apparent of the world’s largest oil exporter. King Salman, his father, appointed him to lead a committee that will restructure the kingdom’s intelligence services after Khashoggi’s slaying. No major decisions in Saudi Arabia are made outside of the ultraconservative kingdom’s ruling Al Saud family.

The kingdom also offered a far different version of events than those given by Turkish officials, who have said an “assassination squad” from the kingdom including an official from Prince Mohammed’s entourage and an “autopsy expert” flew in ahead of time and laid in wait for Khashoggi at the consulate. Beyond its statements attributed to anonymous officials, Saudi Arabia offered no evidence to support its claims.

Khashoggi, a prominent journalist and royal court insider for decades in Saudi Arabia, had written columns for The Washington Post critical of Prince Mohammed and the kingdom’s direction while living in self-imposed exile in the U.S.

“God have mercy on you my love Jamal, and may you rest in Paradise,” Khashoggi’s fiancée, Hatice Cengiz, tweeted following the Saudi announcements.

U.N. Secretary-General Antonio Guterres is “deeply troubled” by the confirmation of the violent death of Khashoggi, a spokesman said.

Guterres “stresses the need for a prompt, thorough and transparent investigation into the circumstances of Mr. Khashoggi’s death and full accountability for those responsible,” spokesman Stephane Dujarric said in a statement.

Standing outside the Saudi consulate in Istanbul, the head of a media group said the “authority that gave the orders” in the killing of Khashoggi should be punished.

Turan Kislakci, president of the Turkish Arab Media Association, said Khashoggi was “slaughtered by bloody murderers” and that his group wants “true justice” for its slain colleague.

In a statement Friday night, White House press secretary Sarah Huckabee Sanders said the U.S. will closely follow international investigations into Khashoggi’s death and will advocate for justice that is “timely, transparent and in accordance with all due process.”

Trump meanwhile called the Saudi announcement a “good first step,” but said what happened to Khashoggi was “unacceptable.”

The announcements came in a flurry of statements carried by the state-run Saudi Press Agency early Saturday morning.

“Preliminary investigations conducted by the Public Prosecution showed that the suspects had traveled to Istanbul to meet with the citizen Jamal Khashoggi as there were indications of the possibility of his returning back to the country,” the statement read. “Discussions took place with the citizen Jamal Khashoggi during his presence in the consulate of the kingdom in Istanbul by the suspects (that) did not go as required and developed in a negative way, leading to a fistfight. The brawl led to his death and their attempt to conceal and hide what happened.”

There’s been no indication Khashoggi had any immediate plans to return to the kingdom.

The Saudi statements did not identify the 18 Saudis being held by authorities and did not explain how so many people could have been involved in a fistfight. The statement also did not shed any light on what happened to Khashoggi’s body after his death.

“The kingdom expresses its deep regret at the painful developments that have taken place and stresses the commitment of the authorities in the kingdom to bring the facts to the public opinion, to hold all those involved accountable and bring them to justice,” the statement said.

The kingdom at the same time announced the firing of four top intelligence officials, including Maj. Gen. Ahmed bin Hassan Assiri, a one-time spokesman for the Saudi military’s campaign in Yemen who later became a confidant of Prince Mohammed.

Saud Qahtani, a powerful adviser to Prince Mohammed, also was fired. Qahtani had led Saudi efforts to isolate Qatar amid a boycott of the country by the kingdom and three other Arab nations as part of a political dispute.

On Twitter, where Qahtani had launched vitriolic attacks against those he saw as the kingdom’s enemies, he thanked the Saudi government for the “great opportunity they gave me to serve my country all those years.”

“I will remain a loyal servant to my country for all times,” he wrote.

Earlier this week, the Turkish pro-government newspaper Yeni Safak, citing what it described as an audio recording of Khashoggi’s slaying, said a Saudi assassination squad seized the journalist after he entered the consulate, cutting off his fingers and later decapitating him. On Thursday, a leaked surveillance photo put Maher Abdulaziz Mutreb, a member of Prince Mohammed’s entourage on trips to the U.S., France and Spain this year, at the consulate just ahead of Khashoggi’s arrival. /atm