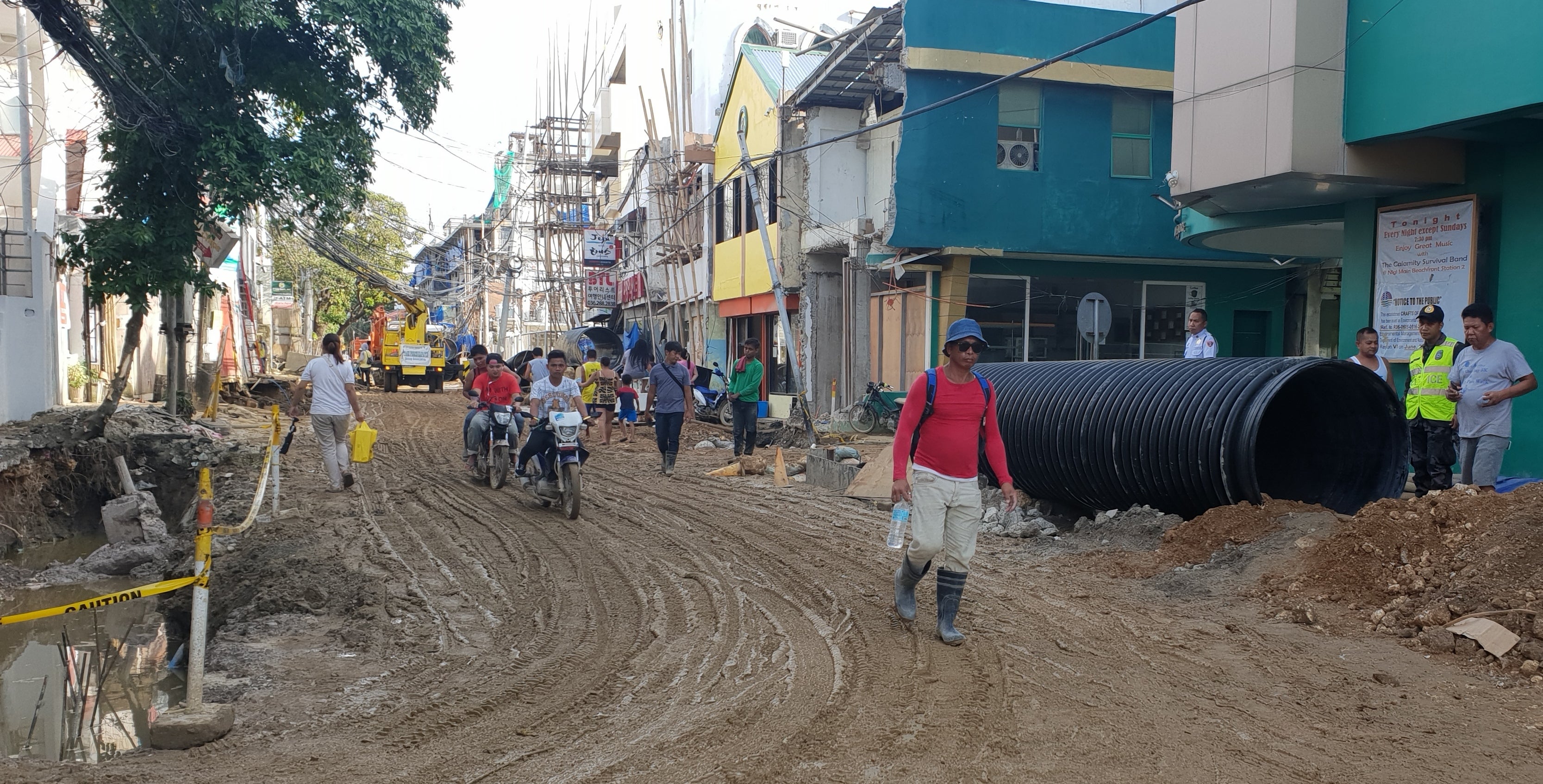 UNFINISHED BUSINESS Just days before Boracay is set to reopen on Oct. 26, roadwork continues on the resort island.

BORACAY ISLAND—When a demolition team arrived on Aug. 17, Mary Ann Casidsid pleaded for one more day to move out her family’s belongings before they tear down her house in one of the wetlands on Boracay Island.

The team, however, ignored her appeal and began demolishing her home even while her four children, aged 4, 5, 8 and 9, were still inside.

“We did not want to remain there but I just wanted another day so we could transfer our things,” she said.

She asked why they were ejected despite a pronouncement from Environment Secretary Roy Cimatu that no resident of the wetland or Boracay’s forests would be removed without a relocation site for them.

Lemuel Tapican, one of the residents close to Wetland No. 6 near the Talipapa Bukid market, said most of the 75 families, including natives of Boracay, living there had been ejected and their houses torn down.

Rowen Aguirre, executive assistant for Boracay affairs of the Malay municipal government, which administers the island, said the relocation sites in Aklan province were not pursued due to geohazard concerns and opposition from landowners.

The Department of Environment and Natural Resources (DENR) was making an inventory and removing illegal structures in the nine wetlands on the island, which have been covered up or occupied by settlers.

The DENR had already partnered with several of the country’s top conglomerates—the Lucio Tan Group, San Miguel Corp., the Gokongwei Group, the Aboitiz Group—and the Lopez-controlled Energy Development Corp. to rehabilitate the wetlands and turn them into ecotourism sites.

The clearing of the Boracay wetlands is one of the key components of the rehabilitation of the island, which was ordered shut down by President Duterte, who called one of the Philippines’ top tourist destinations a “cesspool” due to pollution and haphazard and unregulated resort building.

Olive Abañera, coordinator of We Are Boracay, a group of residents composed mostly of vendors, tricycle drivers, masseuses, tour guides and other workers in the informal sector, said the six-month rehabilitation was implemented with the least consideration of residents, especially those who lost their livelihood.

“For whom is the rehabilitation?” Abañera asked.

Government assistance, including cash-for-work and livelihood programs, were not enough for Boracay residents who had no sources of income for the past six months, according to Abañera.

She said locals, particularly those who did not operate big establishments, were not consulted on the plans and guidelines for the reopening of the island.

Under the guidelines issued by the Boracay Inter-Agency Task Force (BIATF) for the reopening of the island, vendors will not be allowed on the beach and water sports will be suspended, a move that will prevent many from making a living.

“Why don’t they talk to us before imposing these guidelines when we will be the ones most affected? Is there any designated area for vendors if not on the beach? Who will provide this? No one is telling us and we only learn about these in news reports,” Abañera said.

A business operator questioned a plan to transfer a large number of workers of Boracay establishments to Malay town on the mainland to decongest the island and to ensure that the number of tourists and residents is within its carrying capacity of 55,757 people at any given time.

“That is easier said than done,” said the business operator, who requested anonymity. “This would entail transporting 7,000 to 8,000 workers within two hours between the mainland and Boracay. That’s a logistical nightmare because we do not have a reliable and efficient transport system.”

While the rehabilitation of the island has been welcomed by all sectors, the manner it was implemented remains in question.

Residents, who asked not to be identified to avoid antagonizing officials, said the lack of a comprehensive study, plan and preparation on the closure and rehabilitation was apparent.

They cited, for instance, the controversial policy of the DENR to require hotels and resorts, especially those along the beachfront, to put up individual or cluster sewage treatment plants before being allowed to operate when the island reopens to tourists.

Also, the BIATF could not readily release the names of the establishments that would be allowed to operate by Oct. 26 because of conflicting lists among agencies.

A longtime resident said the total closure was a mistake to begin with.

“The rehabilitation should have been done in stages for a more realistic time frame and without driving thousands of workers to poverty and hunger,” the resident said.

Residents welcome the scheduled reopening of Boracay, but they also want a change in the management of the island.

Many are supporting a bill that will create a Boracay Island development authority, which will manage the island, instead of the Malay municipal government.

If that becomes law, Boracay will be exempted from certain provisions of the Local Government Code, which devolved some state responsibilities to the local government.

Cebu City Rep. Rodrigo Abellanosa, House natural resources committee chair, said he would pursue the bill’s passage to ensure that the management of the island would be under an independent entity similar to the Subic Bay Metropolitan Authority.

Sen. Franklin Drilon earlier this year filed Senate Bill No. 1765 to create a Boracay Island council that “shall take over the management, development, regulation, protection and maintenance of the island, including its coastal resources and marine biodiversity.”

The move to create an administrative authority to govern the island has been welcomed by several business operators and residents.

“We want experts and competent people to manage the island,” a resident and business operator said. “We sacrificed so much during the closure and rehabilitation. We do not want the situation to revert to old problems due to the mismanagement of government agencies and the same politicians who have ruled here for so long.”