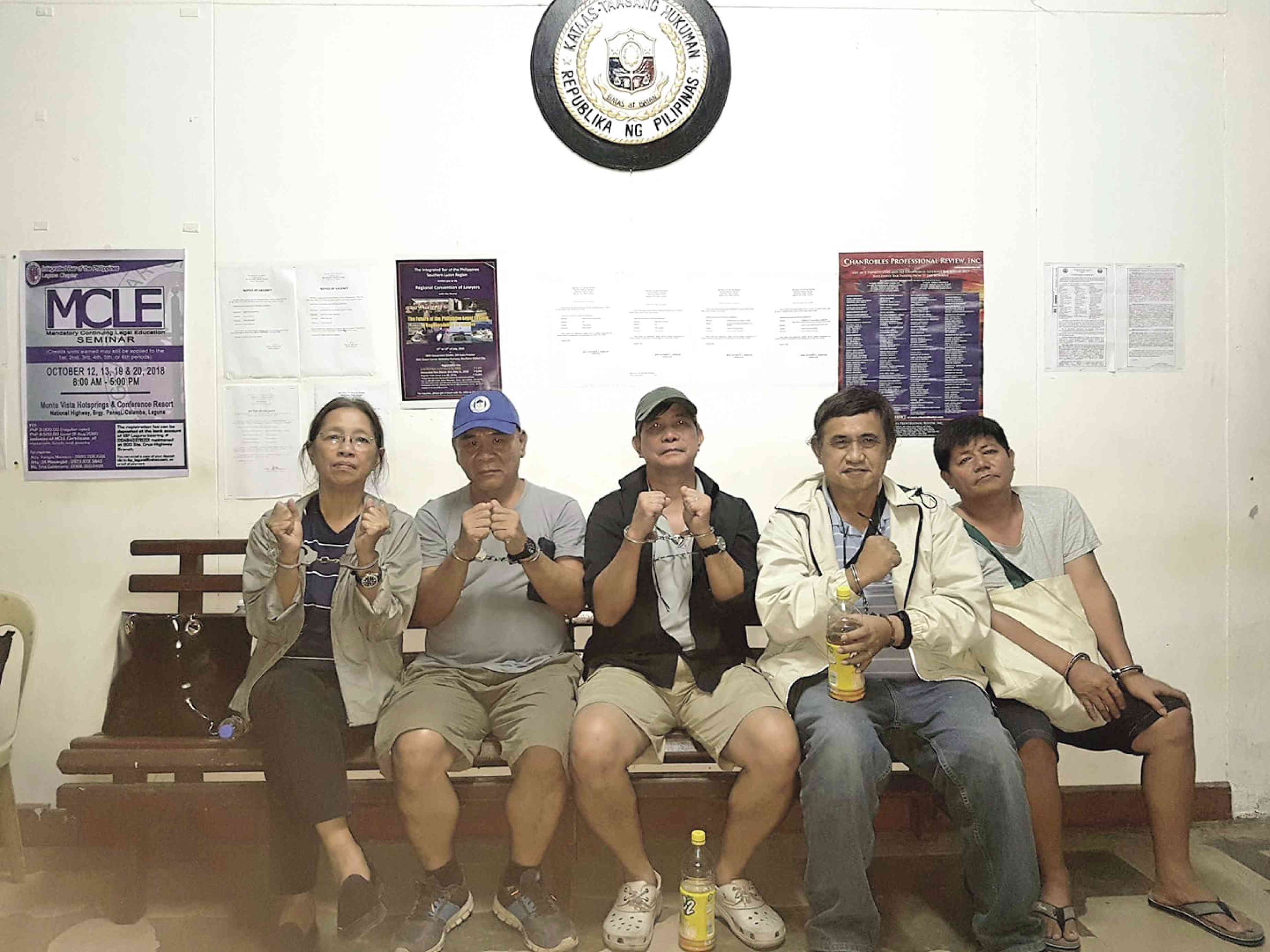 SAN PEDRO CITY—The chief prosecutor of Laguna province on Wednesday ordered the release of three of four companions of a National Democratic Front of the Philippines (NDFP) consultant who were arrested in Sta. Cruz town on Monday.

Lawyer Kristina Conti of the Public Interest Law Center said Adelberto Silva was “consulting” with the four people he was traveling with as part of his job on the Comprehensive Agreement on Social and Economic Reforms (Caser), the NDFP’s proposed economic agenda, when they were arrested by policemen and soldiers at Barangay Pagsawitan on Monday afternoon.

In a resolution on Wednesday night, Laguna prosecutor Ma. Victoria Dado dismissed the case of illegal possession of firearms against Legaspi, 60; Atadero, 55; and Calderon, 63.

The case of illegal possession of explosives was referred for further investigation.

As of 5:30 p.m. on Thursday, however, reports said Legaspi, Atadero and Calderon had yet to be released by the Criminal Investigation and

Human rights group Karapatan said Atadero, a former overseas worker, was an organizer of the labor group Kilusang Mayo Uno, while Legaspi was a farmer.

It said Calderon, a retired social worker, was a consultant to party-list group, Gabriela.

Karapatan said Silva’s arrest was a violation of the previously signed Joint Agreement on Safety and Immunity Guarantees (Jasig) for peace negotiators.

“We have to deny that Adel Silva is part of any [destabilization plot], this so called  ‘Red October’… This story is laughable but we are not amused,” said Conti.

Silva was facing a separate multiple murder charge, which was covered by a warrant issued a few months ago by a court in Manila.

In 2016, the government granted Silva, along with communist leaders Benito and Wilma Tiamzon, temporary liberty to allow them to join the peace negotiations. President Duterte, however, terminated the talks.

In a telephone interview from Camp Crame on Thursday, Silva said they were headed to a resort in Liliw town, Laguna, for a “discussion” on Caser when they were stopped by policemen and soldiers in Sta. Cruz.

“We were held at gunpoint. [We were] asked to alight… and lie on the ground for over an hour. There were many people who witnessed it,” he said.

“We were not carrying any firearm or explosive. It was them [policemen] who put them there,” he said.

Silva slammed what he called another trumped-up charge against him. In 2015, he was arrested in Bacoor City, Cavite province, also for illegal possession of firearms. The case was later dismissed.

“On our part, we want to push forward with the peace process and that trip [in Laguna] was for that purpose,” he said.

Silva said the government should respect the provisions under the Jasig that protects peace negotiators, regardless of the status of the talks.