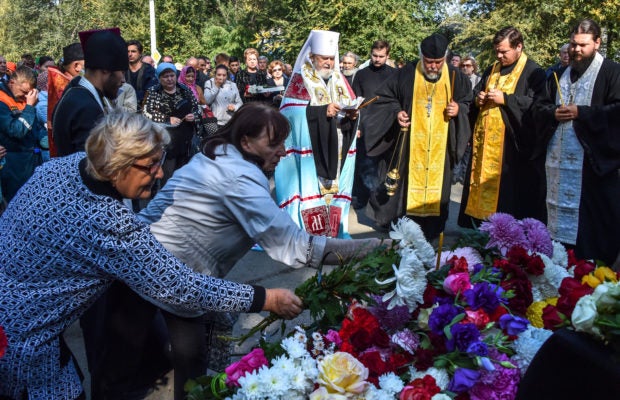 People lay flowers for the victims during a church service in Kerch, Crimea, on October 18, 2018, after a student opened fire at a technical college in the Russian-annexed Crimea city of Kerch. AP

KERCH, Undefined — A crowd of mostly young people gathered at a makeshift memorial on Thursday outside the college in Crimea’s Kerch where a teenage gunman killed at least 20 people a day earlier.

But as well as mourning, some in the Moscow-annexed peninsula were trying to understand how a single student was able to commit a massacre of this scale.

The killer was identified by authorities as 18-year-old Vladislav Roslyakov, who reportedly legally bought the gun used to kill students and teachers before killing himself in the college library.

More than 40 others were injured.

Russia’s National Guard and the army cordoned off the technical college on the night of Wednesday to Thursday.
Overnight flowers, candles and toys piled up near the entrance of the building, which had been visibly damaged by an explosive device reportedly also set up by Roslyakov.

Banners that read “Kerch, October 17 2018” and “We are crying” appeared on the memorial on Thursday morning.
Students and teachers at the college were among the crowd of mourners.

“There was an explosion on the first floor, dust and cement started falling from the ceiling. We heard a siren and ran out into the hallway,” Viktoria Voyko, a first-year student who lost a friend in the rampage, told AFP.

“The sports teacher told us to get out and we ran into the courtyard. There were lots of students lying unconscious. Others were sitting and screaming,” Voyko, who was with her mother, said.

‘Someone manipulated this boy’
Student Alexei Mikhailov recalls a “sudden explosion” and said he first thought that there were “several explosions.”

“There were gunshots on the first floor. That’s where my classmates died, it was horrible,” the first-year student said, holding back tears.

Like other students who came to mourn the dead, he added that he did not know Roslyakov.

Images of the gunman published on the internet show him armed and wearing an outfit resembling the one worn by Eric Harris— one of the two killers of the 1999 Columbine High School shooting.

Yelena Palyuchkina, a teacher who helped evacuate students, said there was “not total panic” at the time of the attack.

“There were scared teenagers, of course, but the teachers managed to get them out in an organised way,” said the woman in her fifties.

She said there was a “brown smoke” which made it “very hard” to breathe.

Behind her, a group of Crimean Tatars — a Muslim community mostly opposed to the 2014 Russian annexation of Crimea from Ukraine — laid flowers at the memorial.

“We want to understand how this happened, and what went through his head,” Crimean leader Sergei Aksyonov told journalists.

Some residents are convinced that Roslyakov could not have committed this massacre alone.

“To do so much damage, so fast, it is impossible that there was only one gunman! But the authorities do not want to panic the population,” Alexei, a 21-year-old former student who refused to give his last name, told AFP.

So far, no evidence appears to support there was another shooter.

But Yelena Paliuchkina is convinced that “someone manipulated this boy.”

“This kind of event is prepared in advance and, in my opinion and that of my colleagues, could not be done alone,” Aksyonov said.

He added that investigators are currently looking into whether Roslyakov had any accomplices and if he had acted “under the influence” of someone.  /ee