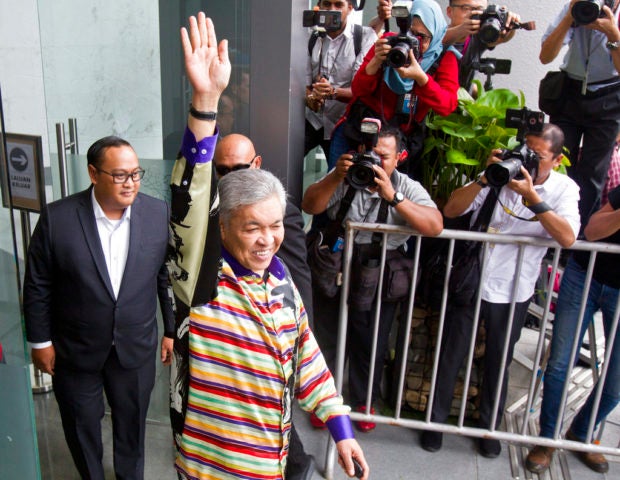 Zahid, who now heads the opposition Malay party, is the latest notable person after former Prime Minister Najib Razak and his wife to face graft charges following the shocking ouster of their coalition in May general elections.

The anti-graft agency said Zahid was detained at its office shortly after he was summoned as part of its probe into abuse of power, criminal breach of trust and money laundering at a welfare group. It said in a statement that Zahid will be taken to court on Friday to face several charges under anti-corruption and anti-money laundering laws.

The agency didn’t give further details, but it has questioned Zahid several times over allegations that funds in his family-run welfare group were used to pay credit card bills belonging to him and his wife. He has reportedly said his officer mistakenly used the foundation’s money to settle the bills.

His daughter, Nurulhidayah Ahmad Zahid, called for prayers for the family and said her father was a “target of cruel injustice” under the new government.

Zahid took over from Najib as president of the United Malays National Organization, or UMNO, the linchpin of the ruling coalition that was ousted in May 9 national polls for the first time since independence from Britain in 1957. The coalition has since broken up but UMNO still holds about a fifth of the parliamentary seats.

Najib and his wife, Rosmah Mansor, have been charged with multiple counts of corruption and money laundering linked to the multibillion-dollar looting of the 1MDB state investment fund that led to his coalition’s shock loss. The fund, set up by Najib, is being investigated in the U.S. and several other countries. They have both denied any wrongdoing and Najib’s trial is to start next year.

Some UMNO leaders urged party members to rally behind Zahid. Senior UMNO official Jalaluddin Alias slammed the planned charges against him as a political vendetta to humiliate the party and paint Zahid as an untrustworthy and unqualified leader. /ee