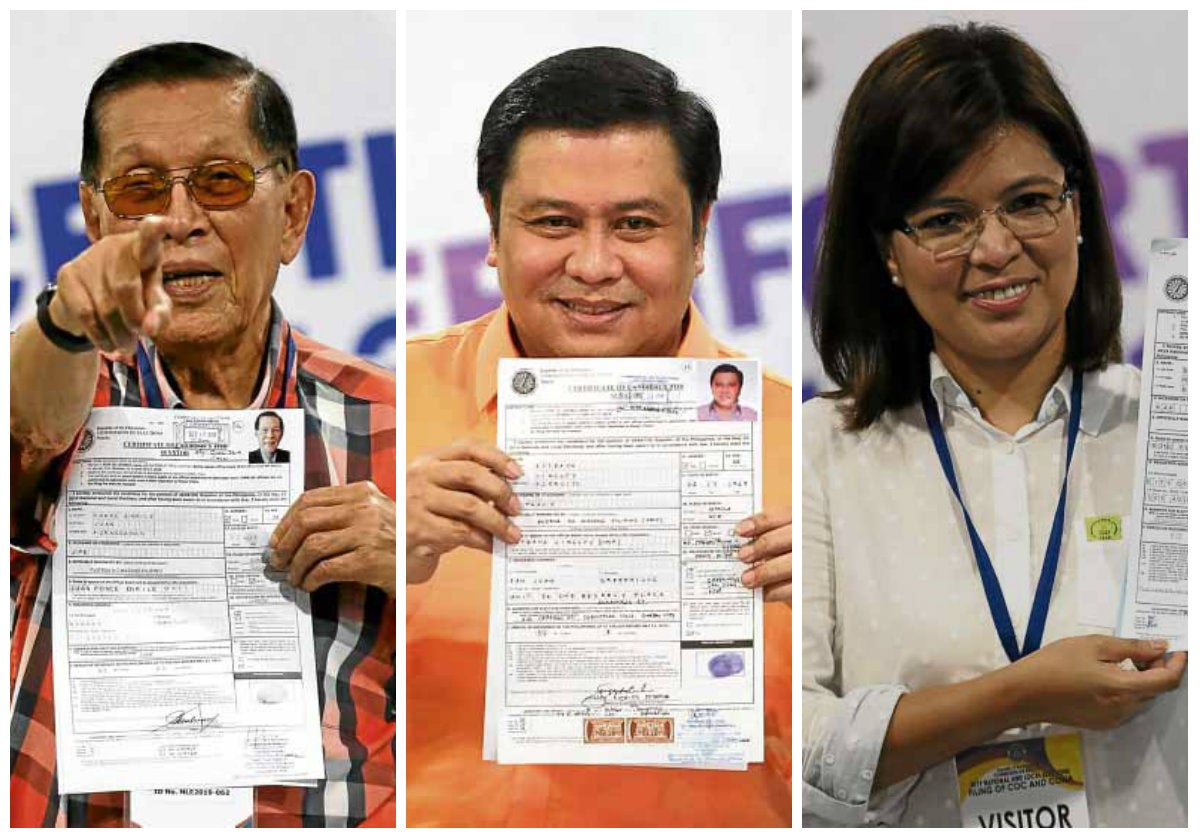 ACCUSED OF PLUNDER Former Senators Juan Ponce Enrile (left) and Jinggoy Estrada, who have been implicated in the P10-billion pork barrel scam, are charting a comeback in the Senate. A third accused, former Sen. Bong Revilla, is also seeking to return, with his wife, reelectionist Mayor Lani Mercado of Bacoor City, filing a certificate of candidacy on his behalf at the Commission on Elections main office in Intramuros, Manila. —PHOTOS BY RICHARD A. REYES AND MARIANNE BERMUDEZ

Detained former Sen. Bong Revilla entered the 2019 race for the Senate on Wednesday, completing the senatorial triumvirate implicated in the P10-billion pork barrel scam that is trying to return to power.

Revilla, through his wife, reelectionist Bacoor Mayor Lani Mercado, filed a certificate of candidacy (COC) for the Senate at the Commission on Elections (Comelec) main office in Intramuros, Manila.

Two others accused in the pork barrel scam, former Senators Juan Ponce Enrile and Jinggoy Estrada, registered for the senatorial race on Tuesday.

The three are accused of graft and plunder for allegedly pocketing hundreds of millions of pesos in kickbacks in the scam allegedly masterminded by businesswoman Janet Lim-Napoles, who is facing the same charges and is jailed in Taguig City.

Enrile and Estrada are out on bail. Revilla’s efforts to regain his freedom while under trial have been unsuccessful.

The cases against the three men are no hindrance to their bid for reelection to the Senate.

Sandiganbayan Presiding Justice Amparo M. Cabotaje-Tang said on Wednesday that until the defendants had been convicted with finality, they could not be disqualified from holding public office.

“The mere pendency of a criminal case is not a disqualifying circumstance,” Tang told reporters.

Several public officials accused of corruption and plunder have registered for the congressional and local elections, including former Masbate Rep. Rizalina Seachon-Lanete, who is appealing to the Supreme Court her dismissal as governor by the Ombudsman over the pork barrel scam.

Former Vice President Jejomar Binay Sr. and former Makati Mayor Jejomar Erwin Binay Jr., both facing trial for alleged overpricing in the construction of the Makati City Hall car park and Makati Science High School, are also running—the father for the House of Representatives and the son, for mayor.

In a statement read for him by his wife, Revilla said he was  running for a third term in the Senate because he wanted to help solve the problems facing Filipinos.

“They may have imprisoned me but they cannot imprison my love for my country,” Revilla said.

Mercado expressed confidence that detention would have no negative impact on the comeback bid of her husband, who is running as a candidate of Lakas-CMD, the party of former President Gloria Macapagal-Arroyo, who is now the Speaker of the House.

“The truth will come out. I believe justice will prevail,” Mercado said.

But no matter the situation, she said they had agreed that they would campaign for Revilla as a family.

Like Revilla, Estrada is confident that his alleged role in the pork barrel scam will not negatively affect his campaign, similar to his situation in 2004 when he was elected to the Senate despite plunder charges that had been filed against him.

Enrile’s lawyer filed a COC for him on Tuesday but he returned to the Comelec on Wednesday to revise his registration.

According to the original filing, Enrile is running as an independent candidate.

In the revision, he is running as a candidate of Pwersa ng Masang Pilipino (PMP), the party of former President Joseph Estrada, who is now mayor of Manila.

Despite being charged with plunder, a nonbailable offense, Enrile, 94, was allowed bail due to his frail health.

Enrile explained that his small room at Camp Crame made him “physically infirm.”

“If I stayed there until today, maybe I’m dead now, I’m not running for the Senate. But because I was released, I was mobile. I go to my province every month by car and it added to my stamina. That’s why I can still stand today and walk erect,” he said.

If he wins, Enrile will be the oldest candidate to be elected to the Senate. He will be 101 when he completes his term in 2024.