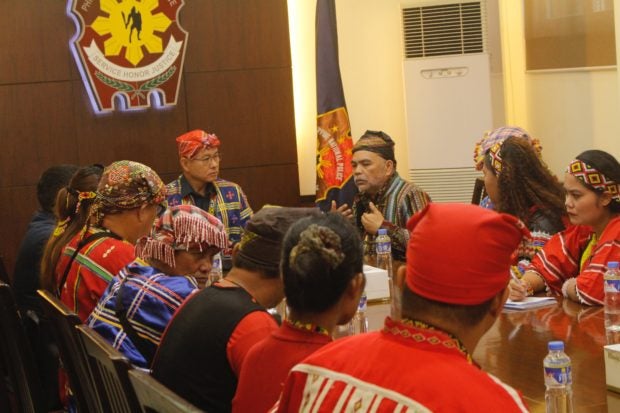 Leaders and members of indigenous people from Mindanao talk to PNP Chief Director General Oscar Albayalde to clear themselves of involvement in rallies leftist activities. PHOTO by Gabriel Lalu/INQUIRER.net

Albayalde said that after talking with Lumad leaders, it appears that those who have allegedly allied with the Communist Party of the Philippines and the New People’s Army (CPP-NPA) may have just adopted the Lumad’s tribal clothing and practices.

The Lumad are non-Muslim indigenous people in the southern Philippines.

“They are often accused as leftists or members of the CPP-NPA because they are seen in most anti-government rallies,” the PNP chief told reporters in Filipino in a press briefing.

“It is clear now that those people in tribal clothes joining rallies are not really indigenous people. The youth here are saying that they do not participate in rallies and they are only used by these groups,” he added.

According to Lipatuan Joel Unad, Chairman of Tribung Uno Manovo, left-leaning groups are exploiting the Lumad by featuring them in rallies just to gain sympathy for their own causes.

“There are organizations who even bring kids to rallies, but its not the kids who benefit from these rallies,” he said in Filipino, adding that those who really benefit from these activities are the organizers who exploit tribal problems.

Unad also said that the rallyists actions, which include wearing Lumad clothing during rallies, is a violation of the indigenous people’s tribal laws.

Unad is one of the Lumad leaders featured in the Facebook video of former Presidential Communications Assistant Secretary Mocha Uson.

In the 27-minute clip, the group said the NPA threatens to kill them if they do not join the movement.

However, progressive groups previously said that some of the Lumad leaders in the video — although not including Unad — were accused of killing tribal leaders, including the executive director of the Alternative Learning Center for Agricultural and Livelihood Development (Alcadev), an alternative school system in Mindanao.

In a House budget hearing last August, lawmakers from the Makabayan bloc called out the Armed Forces of the Philippines (AFP) after an Army commander vowed to destroy Lumad schools that are allegedly influenced by communist rebels.

AFP Chief General Carlito Galvez Jr. insisted that there is nothing wrong with the statement, especially if the military official is seeking peace for people in the region. /ee