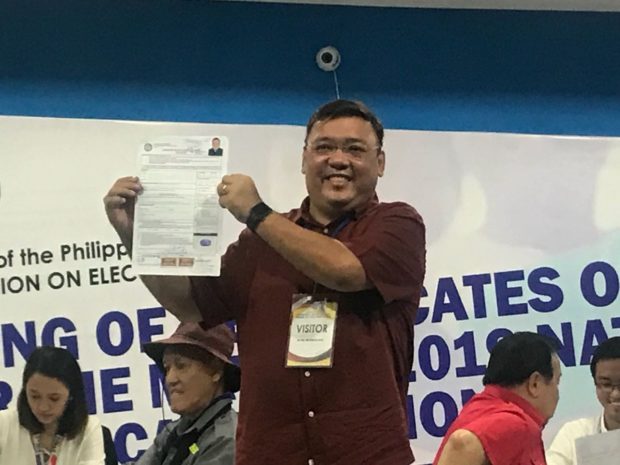 Former presidential spokesperson Harry Roque decided to pursue his original goal of seeking a Senate seat when he filed his COC at the Comelec on Wednesday, Oct. 17, 2018. INQUIRER.NET / CATHRINE GONZALES

Now that senatorial aspirant Harry Roque is part of the People’s Reform Party (PRP), he vowed on Wednesday to revive the legacy that the late Senator Miriam Defensor-Santiago left.

The PRP was founded by Santiago back in 1991.

Roque said that a senatorial aspirant running under PRP should have “leadership qualities” such as integrity and valor.

These qualities, according to Roque, were proven by Santiago during her political years.

(Popularity is not necessary but qualification is; you need to be proven to have abilities and bravery, and these are the leadership qualities that Senator Santiago possessed.)

(So you can expect that even though Senator Santiago is no longer with us physically, we will continue her service and give life to it and carry on her honesty, intelligence, and integrity that she showed in Congress.)

Roque then warned corrupt officials in government of the PRP’s comeback in the political scene.

(My warning to the corrupt and stupid people in government is for them to hide because the People’s Reform Party is coming back to our government.)

Roque filed his certificate of candidacy for senator on Wednesday before noon, two days after he personally announced that he would run as a representative of Luntiang Pilipinas party-list. /je

READ: Harry Roque changes mind, to run for senator in 2019