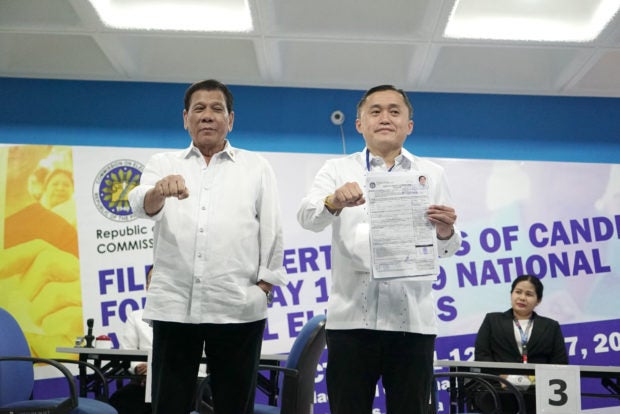 President Rodrigo Roa Duterte strikes his signature pose with Secretary Christopher Lawrence “Bong” Go of the Office of the Special Assistant to the President as the latter files his certificate of candidacy for his senatorial bid before the Commission on Elections (Comelec) in Intramuros, Manila on October 15, 2018. KING RODRIGUEZ/PRESIDENTIAL PHOTO

Panelo issued the remark after the Comelec breached its own rule when Go filed his Certificate of Candidacy (COC) on Monday with a delegation that included President Rodrigo Duterte, former and current Cabinet members, presidential security personnel, and some of his supporters.

Comelec set the limit of the number of persons accompanying a candidate in filing his or her candidacy to only four companions.

Panelo insisted that Comelec just failed to anticipate the attendance of the President in Go’s entourage, making its security personnel unprepared for crowd control.

(He wasn’t favored. What may have happened is Comelec didn’t anticipate that the President was coming so their security was taken by surprise.)

(The ones who accompanied Go were the President and three Cabinet members so it was within the limit. The problem was a lot of other people came along and they didn’t anticipate it, so naturally they had a difficult time.)

“To the extent that special allowances had to be made, and considering the personalities involved, yes,” Jimenez told reporters in Comelec after Go filed his COC. /je