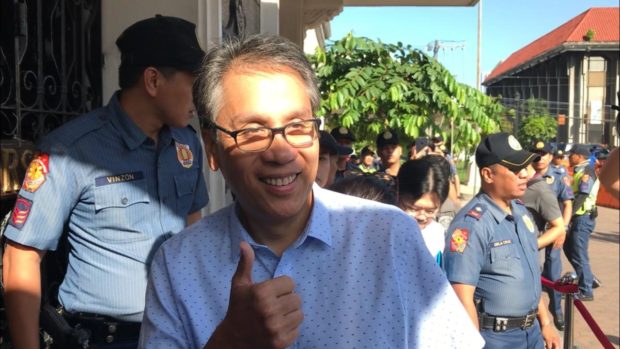 Former Interior Secretary Mar Roxas gives the thumbs up as he enters the Palacio del Gobernador in Manila to file his COC before the Comelec on Oct. 16, 2018. INQUIRER.NET / RYAN LEAGOGO

Democracy is very much alive, Senatorial aspirant Mar Roxas said when supporters of another senatorial hopeful, Imee Marcos, greeted him with a chant of support for Marcos at the Commission on Elections (Comelec) on Tuesday.

“Marcos pa rin! Marcos pa rin!” Marcos’ supporters chanted as Roxas arrived at the Comelec office to file his candidacy for senator in the 2019 elections.

Roxas, who was a senator and Department of Interior and Local Government (DILG) secretary, will run under the opposition Liberal Party (LP).

“Buhay na buhay ang ating demokrasya,” Roxas said when he heard the chants of the supporters of Marcos.

Roxas ran but lost to President Rodrigo Duterte in the 2016 presidential race. /cbb