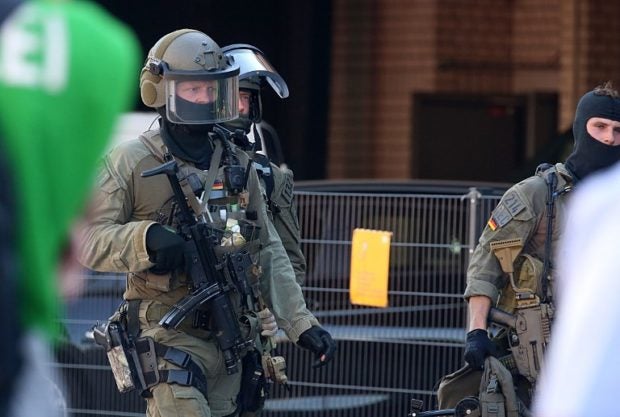 Police Special forces are seen at the hostage-taking at the main railway station in Cologne, western Germany, on October 15, 2018. German police said they were not eliminating terrorism as the motive for a hostage-taking at Cologne central station that left several people injured.  AFP

COLOGNE, Germany – German police said Monday they were not eliminating terrorism as a possible motive for a hostage-taking at Cologne central station that left four people injured.

“The investigation is considering all possibilities and we are not ruling out terrorism,” said Cologne deputy police chief Miriam Brauns at a news conference.

The suspect, who was badly wounded when police stormed the scene, had claimed to be a member of the Islamic State jihadist group, another police spokesman said.

He had first hurled a Molotov cocktail inside a McDonald’s restaurant, injuring a teenage girl, then taken another woman hostage in an adjacent pharmacy.

He was holding a real or replica pistol when commandos stormed the site, said police, adding that the man was also in possession of camping gas containers.

Police said they could not yet positively identify the hostage-taker, who was undergoing surgery, but believed he was a 55-year-old Syrian immigrant.

Syrian identity documents had been found in the pharmacy, they said. /cbb