newsinfo / Headlines
Headlines
‘Do you think I can still find my children?’

A year after Marawi liberation, mother won’t give up search for kids 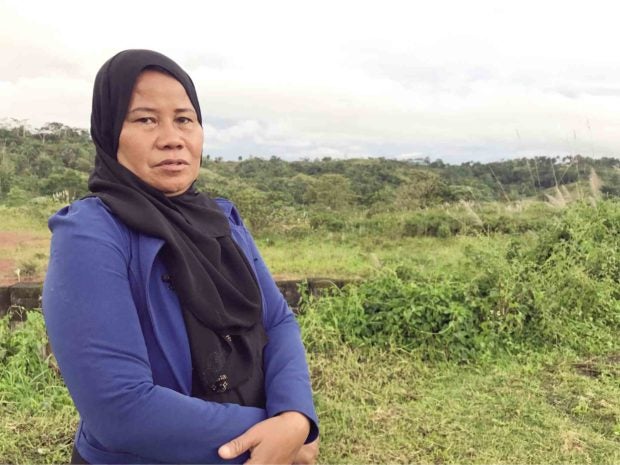 MOTHER’S HOPEFatima Lumabao visits a mass grave (background) of victims of the Marawi siege but says she is not losing hope of finding her four children who went missing at the height of the fighting in the city last year. —JEOFFREY MAITEM

MARAWI CITY — Fatima Lumabao’s life seemed back to normal, a year after this Islamic city was liberated from Islamic State-linked militants who fought government soldiers for five months, leaving more than 1,000 people dead and hundreds more missing, including her four children.

But when she visited the mass grave for the first time since the fighting broke out on May 23 last year, Lumabao’s body shook. The sight of the grave brought back memories of her missing children.

“When we got out of the vehicle, my whole body was shaking. It looked like I could see my missing children calling for my help. I remember again last year, I always dreamed of them … I could hear their voices saying, ‘Mother, please help us. We are here. We need your help.’ It’s very sad,” the solo parent of six children said at the tent city here.

“I was like crazy. I didn’t even know my name anymore. When somebody asked me, I told them, ‘Don’t talk to me.’ I looked for them (children) every day and met people to help me find them,” Lumabao said.

“We could not get inside Marawi. I learned from reports that stray dogs were eating the bodies. It affected me again,” she said.

Lumabao said she was in Iligan City to buy supplies for their small store in time for Ramadan when clashes flared up between a team of soldiers and policemen out to arrest terrorist leader Isnilon Hapilon and his men.

The arresting team was met by a big force of gunmen from the Maute group.

“I learned that those who evacuated Marawi were returning because something happened. When I returned home, we could not enter the city. We were stranded in the town of Saguiaran. We were only able to get inside Marawi on the night of May 23. I tried to go to the dormitory where my children were staying but I could not get inside,” she said.

She added: “My remaining children missed their siblings. At one point, while we were taking our meal, they told me … ‘Mother it seems we are not complete.’”

Lumabao, however, is not giving up the search.

“I’m focusing my attention on my remaining children but I cannot forget them. There are times at night, I will suddenly get up because I can hear their voices. But I will survive this because Allah is with us,” she said.

At the tent city, Lumabao’s neighbor, a resident in the main battle area, said government assistance was sufficient but they needed livelihood for the future of their children.

“I can’t even buy diapers for my daughter. My husband is sick and jobless,” Aira Sambong, 38, said while carrying her daughter Mina, 2. “It’s really hot here at the camp. When it rains or if there’s a typhoon, we are frightened,” she added.

Agakhan Sharief, a Muslim leader who operates at least three schools in Lanao del Sur province, said based on his group’s investigation, soldiers in Marawi were redeployed in other areas days before the siege.

“Before the siege, the government knew they (militants) were going to attack Marawi but it did not do anything to prevent it,” Sharief said.

At the height of the gunfight, he said he helped the government by mediating with Maute gunmen for the release of the hostages and trapped civilians.

“The second day of the siege, Abdullah Maute came to my house in Marawi along with his escorts. He was convincing me to join them but I refused. I told him our brothers would be displaced if they continued,” he said.

Col. Romeo Brawner, deputy commander of Task Group Ranao, said Marawi, once a killing field, now could be considered the “safest city in the country.”

“We believe the terrorists have already left … most of them are in the southern portion [of the lake]. However, we are making sure the city is indeed safe, with martial law implementation,” Brawner said, adding that checkpoints in and out of Marawi were very strict.

“Suspicious-looking people cannot enter and bring their guns in the city. If you noticed, there are no guns displayed around … but before the siege … there were killings everyday in Marawi,” he added.

Mindanao has been under martial law since 2017 in the aftermath of the Marawi siege. Congress later approved two extensions of military rule and the suspension of the privilege of the writ of habeas corpus on the island.