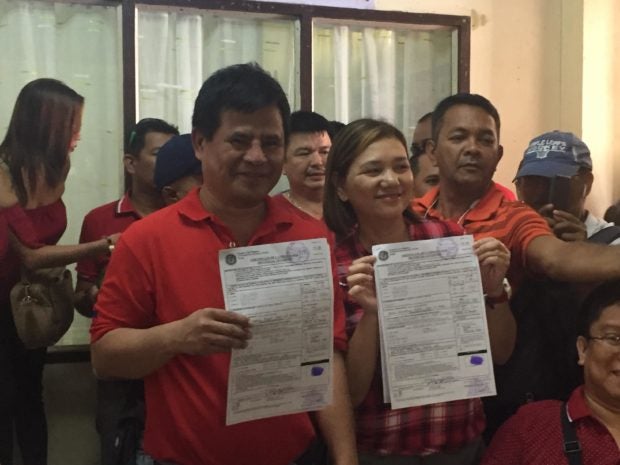 Camarines Norte governor Edgardo Tallado and wife Josefina file their certificates of candidacy (COCs) at the Comelec to run for provincial governor and representative for the first district of Camarines Norte, respectively. PHOTO by Stephanie Florida/Inquirer Southern Luzon

Tallado, who had served the period of dismissal issued by the  Department of  the Interior and Local Government (DILG) in March, will be running  for governor of the province again.

His dismissal was based on an  Ombudsman decision which found him guilty of grave abuse  of authority and grave misconduct in a complaint filed against him by  former provincial veterinarian Edgardo Gonzalez in 2012.

The interruption of his term of office allowed Tallado to run for a fourth term.

“Nothing could stop me now that the issue is already settled.  Substantial enough to extend my term of office. I still have pending  projects that I have to finish, I still want to serve Camarines Norte.  There is still a lot that we can do,” Tallado said.

Meanwhile, Tallado’s wife, Josefina, will be running for congresswoman  in the first district of Camarines Norte.  This will be her second try  after losing in the 2016 elections.

Josefina said she will focus on the major concerns in the province  if she is elected.   “My focus will be the senior citizens, livelihood, and tourism,” she said.