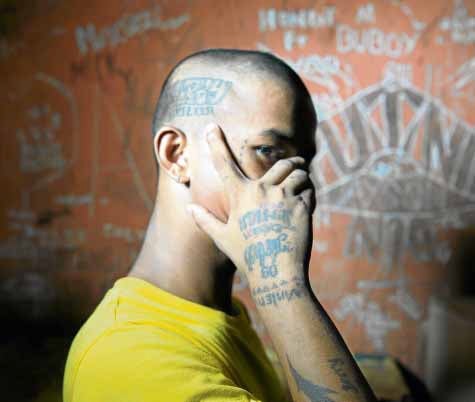 CRACKDOWN An inmate at Manila City Jail harbors an ambivalent view of President Duterte’s war on drugs. Experts say the antidrug war has tapped into genuine popular outrage over disorder, crime and dysfunction in a developing nation with millions of poor people and a turbulent past. —AFP

Jailed drug user Bitoy Paras perks up when describing his support for President Rodrigo Duterte’s deadly war on narcotics, an unlikely fan of a campaign that has left Filipinos deeply conflicted.

“[Mr.] Duterte talks tough, saying he will get rid of addicts … I am happy he’s doing that,” he told Agence France-Presse (AFP) at Manila City Jail, which is packed with drug suspects.

“But I feel uneasy about the killings,” said the 22-year-old pedicab driver, whose real name cannot be used due to prison policy.

No support for killings

Paras’ seemingly paradoxical backing echoes that of millions of Filipinos, who polls say support the crackdown but not the thousands of slayings that are central to it.

The President’s drug war — his signature initiative — helped bring him to power in mid-2016, promising to rid society of narcotics by any means necessary.

Since then, the Philippine National Police says officers has killed 4,854 alleged drug users or dealers in self-defense, while rights groups estimate the true toll is at least triple that.

According to the latest survey by pollster Social Weather Stations (SWS), the campaign still has the backing of 78 percent of Filipinos, a figure undented in over a year.

Drug war proponents regularly point to these statistics as proof that the internationally condemned crackdown is the will of the people.

But those same polls show near unanimous agreement — 96 percent — among the nation in opposition to the killing, saying the suspects should be taken alive.

Experts say the President’s campaign has tapped into genuine popular outrage over disorder, crime and dysfunction in a developing nation with millions of poor people and a turbulent political past.

“It’s not like they’re turning a blind eye [to the killing] but they’re really worried about the drug problem,” said Steven Rood, a fellow in residence at SWS.

“It has been a problem for a long time and finally the President of the Philippines is doing something about it,” Rood added, describing how many Filipinos view the narcotics issue.

But for the family of Duterte voter Katherine Bautista, that belief was suddenly turned on its head by tragedy last year.

Bautista supported the crackdown until her stepson, John Jezreel David, was shot dead in what police said was an antidrug operation although she insisted John was not a drug user.

“I was even saying that the tears of families [of those killed] seemed fake. But when it happened to us, I felt the pain they were feeling,” Bautista told AFP.

“If it doesn’t happen to your family, you won’t wake up to the truth,” she added.

A significant strand in the opposition to the killings is the fear a loved one could be slain just by being in the wrong place, not necessarily because of involvement in drugs.

“People feel very afraid that their families or their relatives might be placed in a situation where they could be the targets,” Randy David, a sociologist and a columnist for the Philippine Daily Inquirer, told AFP.

“But how can you possibly disagree or not lend support for a campaign to rid this country of illegal drugs?” David added, saying the lethal methods were what prompted questions.

There has been broader condemnation of the crackdown at home and abroad.

Rare protests were held in the Philippines last year following the deaths of teenagers, while outrage over alleged abuses has prompted the Preisdent to twice remove police from the front lines of the campaign — only to reinstate them, and promise to pardon officers convicted of murder.

The International Criminal Court has launched a preliminary examination into the killings, while rights groups say the President may be overseeing a crime against humanity.

Meanwhile, the President hammers the menace posed by drugs in near daily speeches in which he has described addicts as “not human.”

Analysts say the President uses clear and repeated messaging in an effort to buttress backing for his campaign.

“The way [the message] is delivered is that there is a very big threat, so first there’s the production of massive fear,” said Ateneo de Manila University psychology professor Cristina Montiel.

“Then [comes] the salvific message that this program or this leader is here to save you,” Montiel added. “That’s how popular support is produced.”

As the campaign continues, the death toll is well over Amnesty International’s count of 3,240 people killed during the nine years of martial law rule under dictator Ferdinand Marcos, the country’s darkest chapter since World War II.

The President recently addressed the thorny issue of the killings, delivering what critics called a clear admission they were suspect.

“What are my sins? Did I steal money? Even just P1? Did I prosecute somebody I sent to jail?” he asked in a speech in September. “My only sin is extrajudicial killings.”