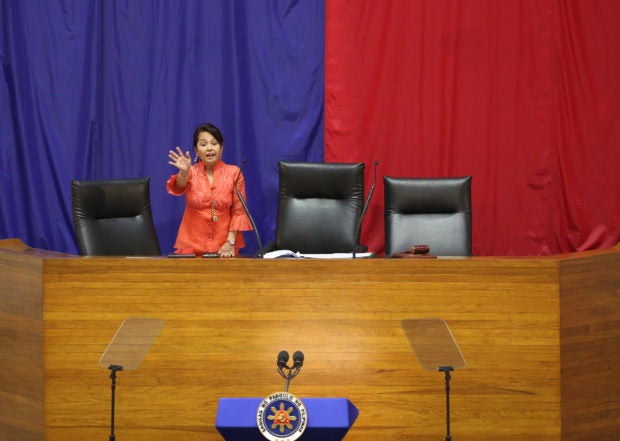 HELLO,GOODBYE Former President Gloria Macapagal-Arroyo tries to draw attention from congressmen as she tries to sit in the Speaker’s chair during the House coup in July. —JOAN BONDOC

CITY OF SAN FERNANDO— The days of Gloria Macapagal-Arroyo as Speaker are numbered, and her son, Juan Miguel, or Mikey, is running to take her place as representative of Pampanga’s second district.

Arroyo, former President, is serving her last term as representative.

Mikey filed his certificate of candidacy (COC) on Friday in a bid to return to the House of Representatives and replace his mother.

Mikey said he wanted to continue the programs his mother had started for the province’s second district.

He is running as a candidate of the Lakas-CMD, his mother’s party.

He served for a term as vice governor, two terms as congressman and a term as a party-list representative.

Mikey’s wife, Angela, and their two daughters were also with him, along with 18 mayors and eight board members.

The Pinedas are running under the local party that the clan founded, Kambilan.

Arroyo is leaving an indelible mark in the House after snatching the position of Speaker from Rep. Pantaleon Alvarez, a buddy of President Duterte and ally in Davao.

The unseating of Alvarez was likened to a coup made successful by the participation of Davao City Mayor Sara Duterte, who had clashed with Alvarez following her decision to form a regional political party, Hugpong ng Pagbabago (HNP).

Alvarez described HNP as an opposition party, which Mayor Duterte resented, telling Alvarez he messed with the wrong person.

But in a July report on Inquirer.net, an ally of Arroyo, House Deputy Speaker Fredenil Castro, said the change of leadership in the House was not a coup.

Castro said majority of congressmen voted in favor of Arroyo, and the process was not irregular as claimed previously by the Alva-
rez camp.

Alvarez had questioned the validity of the election of Arroyo as Speaker. —Tonette Orejas