Seventeen senators, all belonging to the majority bloc in the Senate, have asked President Rodrigo Duterte to support their move to suspend any further increases in excise taxes on fuel.

The senators made the appeal in a letter to Duterte dated October 9.

“We, the undersigned senators who are supportive of your reform efforts, respectfully solicit your support in a move for both Houses of Congress to suspend any further increases in excise taxes on diesel, gasoline, and other petroleum products for 2019 and 2020 as mandated RA 10963 or the ‘Tax Reform for Acceleration and Inclusion (Train Law),'” the letter read.

The letter was signed by the following: 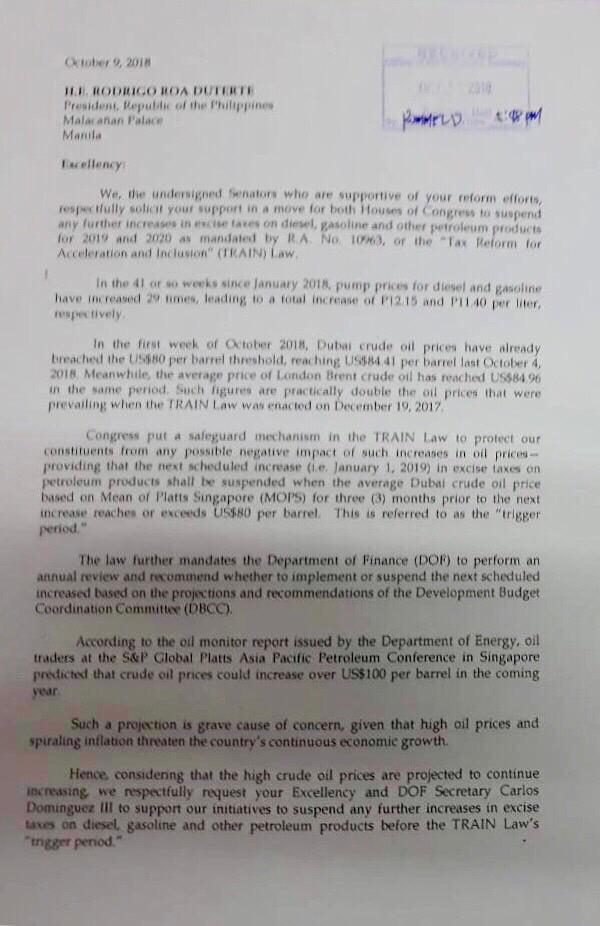 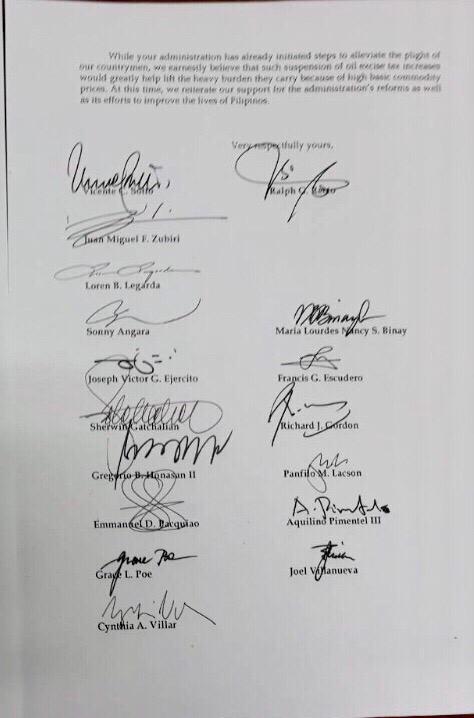 In the letter, the senators noted that in the past 41 or so weeks since January 2018, pump prices for diesel and gasoline have increased 29 times, or a total of P12.15 and P 11.40 per liter, respectively.

They pointed out that under the Tax Reform for Acceleration and Inclusion ( TRAIN) law, the next scheduled increase (on January 1, 2019) in excise taxes on petroleum products should be suspended when the average Dubai crude oil price  based on Mean of Platts Singapore (MOPS) for three months reaches or exceeds $80 per barrel.

“According to the oil monitor report issued by the Department of Energy, oil traders S&P Global Platts Asia Pacific Petroleum Conference in Singapore predicted the crude oil prices could increase over $100 per barrel in the coming year,” the senators said.

They added that such a projection was a “grave cause of concern,” as high oil prices and spiraling inflation continue to threaten the country’s economic growth.

“Hence, considering that the high crude oil prices are projected to continue increasing, we respectfully request your Excellency and DOF Secretary Carlos Dominguez III to support our initiatives to suspend any further increases in excise taxes on diesel, gasoline, and other petroleum products before the TRAIN Law’s ‘trigger period,'” the senators added.

Notably, no opposition senators have signed the letter.

But last week, the six opposition members in the Senate have filed a resolution calling for the suspension of the excise tax on fuel. /ee