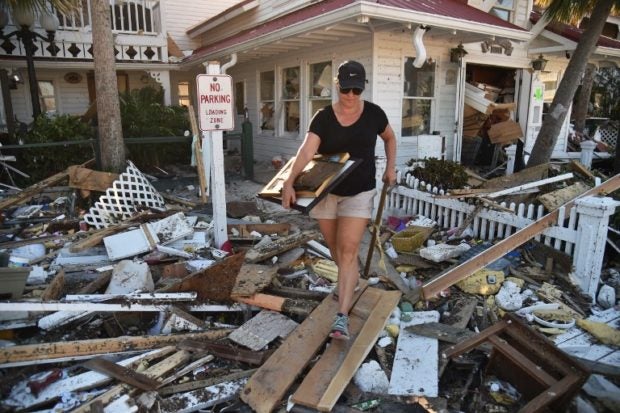 PANAMA CITY, US — Since Hurricane Michael roared through on Wednesday, a wide swath of Florida’s northwest coast has been without telephone or Internet service, adding to the daunting challenges facing residents, loved ones trying to reach them, and the work crews struggling to bring them relief.

“We have had some sites come back in service following the restoration of fiber links,” cable operator Verizon said in a statement Friday. It has deployed five mobile cell sites with satellite connections “to assist with recovery efforts” while full service is restored.

But in Michael’s devastated wake, and with tens of thousands still without  electricity or electronic communications, those five sites have made only a modest dent.

A wide coastal zone between Panama City and the much smaller town of Mexico Beach, 25 miles (40 kilometers) to the southeast, remains cut off.

In Mexico Beach, which suffered the full wrath of Michael’s intense winds and catastrophic storm surges, rescue teams have no choice but to rely on satellite phones. An emergency communications tower has been installed for their exclusive use.

The town has been placed on lockdown, with no one but residents allowed to enter. People arriving on the scene to check on friends or relatives or offer their assistance have been stopped at police blockades, unable to get through.

‘Everything has shut down’

The situation in Panama City varies — communications are better in the city’s western neighborhoods than in its east — and even there signals are patchy.

“We have barely any way to communicate with our … 800 members,” he said. “Some have evacuated, and we have been messaging back and forth with OnStar (the car-based emergency communication and navigation system). We also checked door-to-door in the neighborhood.”

Two blocks away, Daniel Fraga, an electrician, said he has only an extremely weak and intermittent signal. To reassure family members who had evacuated to the neighboring state of Alabama, he turned to a friend with a stronger signal.

“Basically everything has shut down,” he said, adding that there are “too many people on the same service.”

A neighbor, Twyla Williams, is surviving without running water along with her diabetic husband and her eldest son, a teenager. Other families had fled to Mississippi.

“My customers have been checking on me,” said Williams, who works for an architectural blueprint firm.

“One of them just pulled up to give us Gatorade, water, some food.”

But with no Verizon signal, she said she used another carrier to log onto Facebook and let relatives know her family was safe.

The city’s emergency services say they have received thousands of calls from people desperate for news of loved ones. But they too are struggling with little or no service.

At nearby Tyndall Air Force Base, on the coast between Panama City and Mexico Beach, the army has set up a dedicated website for those “who are worried about someone.”

Tyndall, which itself suffered serious damage both to its facilities and to warplanes parked on its tarmac, is forwarding requests to local agencies.