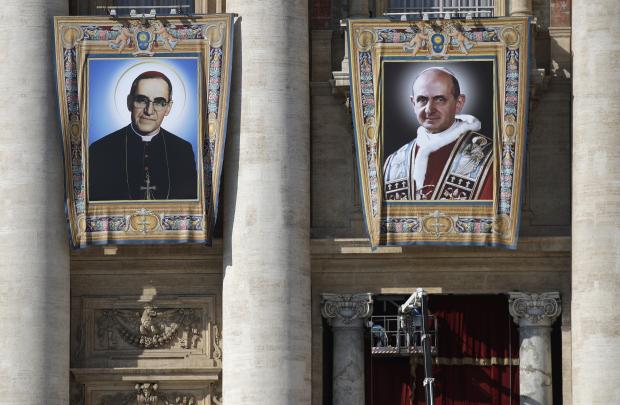 VATICAN CITY — Pope Francis will canonize two of the most important and contested figures of the 20th-century Catholic Church, declaring Pope Paul VI and the martyred Salvadoran Archbishop Oscar Romero as models of saintliness for the faithful today.

Sunday’s ceremony is likely to be emotional for Francis, since he was greatly influenced by both men and privately told confidantes he wanted them made saints during his papacy. The two represent the epitome of the outward-looking church that Francis has championed, one that is close to the poor and fights injustice.

Paul VI and Romero also endured strong opposition from within the church in life and after death — a fate Francis is experiencing now amid the church’s burgeoning sex abuse and cover-up scandal.

These two towering figures will be canonized along with five others in a ceremony designed to show that holiness can be attained in all walks of life.

When Cardinal Jorge Mario Bergoglio delivered the 2013 stump speech to cardinals that got him elected Pope Francis, he made only one citation in the text: Pope Paul VI.

When later that year Francis issued the mission statement of his papacy, he based it largely on a 1975 text by Paul on evangelization, which Francis once called “the greatest pastoral document” of the modern church.

“One of the first things he told me when he was elected was that he hoped, he prayed to be able to canonize Paul VI,” said Francis’ former chief of staff, Cardinal Angelo Becciu.

Giovanni Maria Vian, editor of the Vatican newspaper L’Osservatore Romano, said Bergoglio matured as a priest, a Jesuit and a Christian while Paul VI was pope from 1963-1978.

“It’s understood that Paul VI is his pope,” Vian said.

Paul is perhaps best known for having presided over the final sessions of Vatican II, the tumultuous 1962-65 church meetings that modernized the Catholic Church and opened it up to the world, allowing liturgy to be celebrated in the vernacular rather than in Latin and calling for greater roles for the laity and improved relations with people of other faiths.

During his 15-year papacy, Paul VI ushered in other reforms as well, including that of the travelling papacy.

Paul stepped foot on each of the five continents, but two of his trips stand out most: In 1964, he travelled to the Holy Land and met with the spiritual leader of the world’s Orthodox Christians, a first since the schism that divided Christianity 1,000 years earlier.

A year later, Paul travelled to the United Nations, where he delivered the now-famous plea for peace as the U.S. military involvement in Vietnam escalated: “Never again war! Never again war!”

But it was Paul’s 1968 encyclical “Humanae Vitae” that marked his papacy, reaffirming the church’s opposition to artificial contraception.

Issued in an era of the contraceptive pill, the 1960s’ sexual revolution and alarm about overpopulation, the stark prohibition empowered conservatives but drove progressives away.

Even today, the document remains one of the most contested and ignored of papal encyclicals, with studies showing that most Catholics disregard it and use artificial contraception.

“It’s a text that isn’t rooted in reality, where life is absent and above all women are absent,” Monique Baujard, former head of family services at the French bishops’ conference, wrote last month in a Vatican’s women’s magazine.

Francis also longed to declare Archbishop Oscar Romero a saint, convinced that he was a true martyr for the faith who willingly gave up his life to stand with El Salvador’s poor and denounce the violence of the military dictatorship.

Romero, archbishop of San Salvador, was gunned down by right-wing death squads as he celebrated Mass on March 24, 1980 in a hospital chapel. The military had vehemently opposed his preaching against the army’s repression at the start of the country’s 1980-1992 civil war.

Almost immediately after his death, Romero became an icon of the South American left, with his image frequently appearing alongside the likes of Che Guevara and Salvadore Allende.

But that post-mortem politicized fame cost Romero dearly as his saint-making cause wound its way through the Vatican.

After the cause was held up for three decades, Pope Benedict XVI finally unblocked it in 2012 and Francis, history’s first Latin American pope, pushed it through to its final phases.

A few months after Romero was beatified in 2015, Francis denounced how Romero had suffered as a martyr twice — once when he was gunned down, and again when his own brother bishops “defamed, slandered and had dirt thrown on his name.”

Even earlier, though, Francis made clear he wanted to see Romero honored.

Romero’s former secretary, the Rev. Jesus Delgado Acevedo, revealed a private conversation he had with then-Cardinal Bergoglio in 2007 on the sidelines of a conference of Latin American bishops in 2007 in Aparecida, Brazil.

He recalled asking Bergoglio, then the archbishop of Buenos Aires and an influential cardinal at the meeting, “Eminence, one day will Oscar Romero be canonized? Cardinal Alfonso Lopez Trujillo told me it will never happen.”

Delgado quoted Bergoglio as saying “Listen, if I become pope the first thing I’ll do is send Lopez Trujillo to San Salvador” to make him a saint. /atm