For years ‘nobody remembered him,’ says new saint’s brother 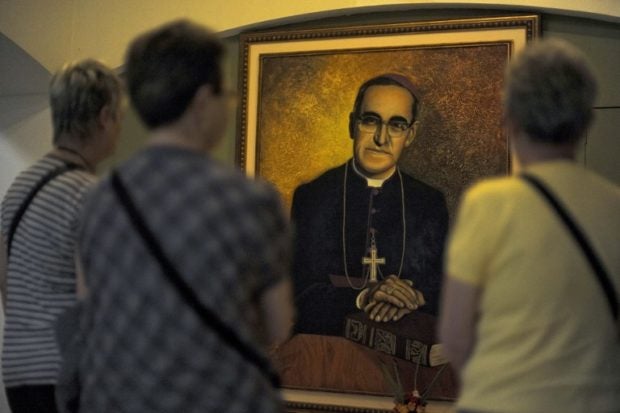 San Salvador, El Salvador — What Gaspar Romero remembers most about his brother’s funeral was the thump of explosions in a crowded plaza, the rattle of gunfire, the screams of the crowd — and that in the midst of it all, Archbishop Oscar Romero was buried “in a rush.”

That was in San Salvador, the capital of a Central American country in the grip of a terrifying civil war in 1980, a few days after the archbishop was shot dead as he said mass.

Thirty-eight years on, the younger Romero will on Sunday find himself in another crowded plaza — St. Peter’s Square in the Vatican — for his brother’s canonization, the civil war in El Salvador consigned to history.

“The family is very proud, very honored, even stupefied by the incredible event that is coming,” 88-year-old Romero told AFP.

His brother’s elevation to sainthood “is a gift from God to the Salvadoran people, who are suffering from so much crime and social violence.”

The younger Romero had to get a loan to travel to Rome with seven family members to witness Sunday’s ceremony which will be presided over by Pope Francis.

The trip brings a great deal of personal satisfaction to Gaspar Romero. For in the aftermath of his assassination, any mention of his brother was banned and carrying his books was a virtual death sentence if they were discovered by the police, he said.

“We felt alone, because there was a time when nobody remembered him, starting with the hierarchy. We thought his death was mandated by the capital,” said Gaspar Romero.

The archbishop had been a tireless agitator for the poor and victims of repression, which brought him into regular conflict with the right-wing government, and the Catholic hierarchy, which deemed him too political.

Before and after Romero’s assassination, priests and nuns and other religious figures were killed at the hands of right-wing death squads and security forces.

And for years, the movement to make him a saint was resisted by conservative Catholics and the Salvadoran right, who viewed his sermons eulogizing the poor and radio broadcasts condemning government repression as Marxist.

As Gaspar Romero takes in the view on Sunday, when his brother is made a saint along with Pope Paul VI, he will remember the dozens killed at his sibling’s funeral.

When the shooting started, terrified people took refuge in the Cathedral and the archbishop’s gray coffin was rushed inside.

“The mass could not be finished. The plaza was full, suddenly a bomb exploded in the middle of the people. I saw that people exploded and flew in all directions. It was something indescribable,” Gaspar Romero recalled.

“They buried him in a rush,” hurriedly placing his coffin in a “temporary” grave on the east side of the Cathedral, he also said.

After the blasts, “people ran out looking for shelter, and from the high buildings, the authorities were shooting at the people who were running.”

Among those in the plaza were members of the guerrilla group Revolutionary Coordinators of the Masses, carrying weapons. But it was unclear if it was they or pro-government forces that began the firing.

Estimates vary, but around 40 people were killed in the shooting and subsequent stampede.

The prolonged blaring of ambulance sirens evacuating the injured added to the confusion and anxiety of priests and pilgrims, who had to leave the Cathedral at the end of the afternoon “with their hands on their heads” closely watched by security forces, said Romero.

The archbishop’s remains were later exhumed and reburied in the crypt of the Cathedral. /kga