Comelec to review proposal to disqualify ‘narco-pols’ in 2019 polls

The Commission on Elections (Comelec) will review the proposal of the Department of the Interior and Local Government (DILG) to disqualify from the 2019 midterm elections all candidates included in the so-called “narco-list,” or the list of government officials allegedly have links with the illegal drug trade.

Comelec chair Sheriff Abas said this on Friday as Usec. Eduardo Año, DILG Officer-in-Charge, earlier said he will recommend the disqualification from the coming elections all of the politicians connected with illegal drugs.

“As chairman, I included it in yesterday’s agenda at the en banc at nirefer po namin sa [and we referred it to the] law department [of the Comelec] for further study,” Abas said in a press briefing. 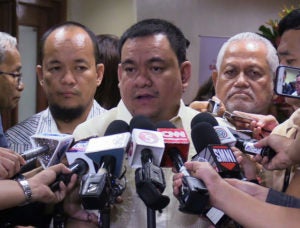 “Same yung prayer nila, kung pwede madisqualify yung nasa listahan [They have the same prayers, if we can disqualify those in the list],” he said.

The DILG will also reportedly submit to the Comelec its own list of politicians tagged of having involvement in illegal drugs.

Abas, however, said that there should be a “balance” if they will follow the suggestion of the DILG and PDEA.

He said there should be a due process in disqualifying candidates, citing that mere inclusion in a list does not equate to being dropped from the elections.