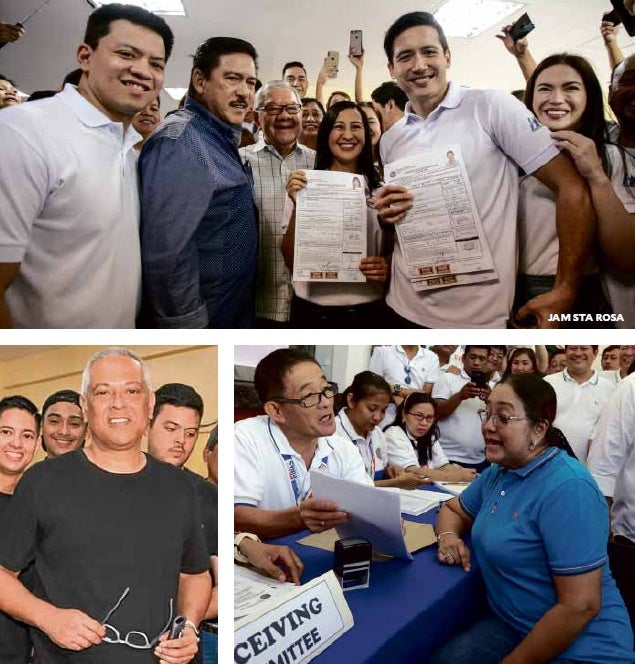 Quezon City lived up to its moniker “City of Stars” as personalities from the often-overlapping worlds of politics and show business turned up  among the early birds who filed certificates of candidacy (COCs) for the May 13, 2019, local elections.

As of Thursday, the first day of the weeklong period for the filing of COCs, the contest for the city’s top posts pitted Vice Mayor Josefina “Joy” Belmonte and her running mate, 3rd District Councilor Gian Sotto, against Rep. Ismael “Chuck” Mathay III and his vice mayoral aspirant, 2nd District Councilor Roderick Paulate.

Belmonte and Sotto’s fathers had their turns governing the city: 4th District Representative and former Speaker Feliciano “Sonny” Belmonte served as mayor from 2001 to 2010, while Senate President Vicente “Tito” Sotto III was vice mayor from 1988 to 1992.

Both the elder Belmonte and Sotto were present as their children filed their COCs at the Comelec office in Manila, their arrival greeted by cheering supporters.

“My performance can speak for itself. I am known as a woman who does not rest, so I think people know that I have done my job well,” Joy Belmonte told reporters. “I think I know this city very well and I am in the best position to serve it.”

Belmonte and Sotto will campaign under the banner of Serbisyo sa Bayan (SB), a regional party based in Quezon City that is allied with Hugpong ng Pagbabago, a political vehicle founded by the President’s daughter, Davao City Mayor Sara Duterte.

Under the alliance, senatorial candidates under Duterte’s slate will be supported by SB. “We’re happy to do that in support of our President,” Belmonte said.

In 2016, Belmonte and Sotto ran under the Liberal Party along with incumbent Mayor Herbert Bautista, before they changed political colors and moved to Partido Demokratiko Pilipino-Lakas ng Bayan in May 2017.

Meanwhile, Mathay’s bid for the mayoral post signaled the attempt by another political household to dominate City Hall. Mathay is the son of Ismael Jr., who was mayor from 1992 to 2001.

“Before I filed, I had consultations with my constituents and they said there’s a need for democracy in Quezon City,” he said. “For a long time, there have been no other candidates other than [the incumbents.]”

Mathay and Paulate are running under the Katipunan ng Demokratikong Pilipino ticket.

The Comelec desk for COC filing. —RICHARD A. REYES

“Dick” Paulate, a former TV-movie comedian and currently president protempore of the city council, said he was gunning for the No. 2 post to rise above “dirty politics,” which he said had been hounding his government career.

“Since 2010, I have been under attack but the people continued supporting me for eight years,” said the actor, who is on his third and final term as councilor.

Paulate, who was accused in the Office of the Ombudsman of hiring “ghost employees” in 2010, expressed confidence that the case would not affect his campaign.

“If you look at the higher level positions, some politicians have similar cases but they still run. It means legally I can also run,” he said.

Also among the council aspirants who filed COCs on Thursday was a grandson of former Speaker Belmonte, 27-year Fernando Miguel.

First District Rep. Vincent Crisologo, who earlier confirmed that he would seek the mayoralty, can make it a three-way fight.

Bautista, the outgoing mayor, has been rumored to be setting his sights on a House seat for the city’s 3rd District.

In Makati City, the son of a former mayor will try to break the Binay family’s decades-long grip on power.

Ricky Yabut, whose father, Nemesio Sr., governed the city for 14 years during the Marcos regime, promised to “make Makati great again” as he filed his COC on Thursday.

Yabut said he was “ready to join the battle against the Binay siblings,” referring to the emerging rivalry between reelectionist Mayor Abby Binay-Campos and her brother, former mayor Junjun Binay.

The Binay patriarch, Jejomar, succeeded Yabut’s father, who died in 1986.

A profile of Ricky Yabut on Rogue Magazine described him as a “polo player and ladies’ man” who had been left a “substantial fortune” after his father’s death. The businessman has never held an elective position.

In Mandaluyong, incumbent Mayor Carmelita “Menchie” Aguilar-Abalos hopes to get a second term and keep the family’s foothold in the so-called “Tiger City,” expecting no major opposition in next year’s polls.

She succeeded her husband, Benjamin Jr., who held the mayoral post from 1998 to 2004 and was again elected in 2007 until his next three-term administration ended in 2016.

Mandaluyong has long been Abalos country since the patriarch, Benjamin Sr., who also served as Comelec chair, became mayor in the late 1980s.

“It truly warms the heart to feel your continued support for #TeamPerformance,” Abalos said on her Facebook page after filing her COC on Thursday along with her running mate, incumbent Vice Mayor Antonio Suva. —WITH A REPORT FROM CEDRIX PEREZ